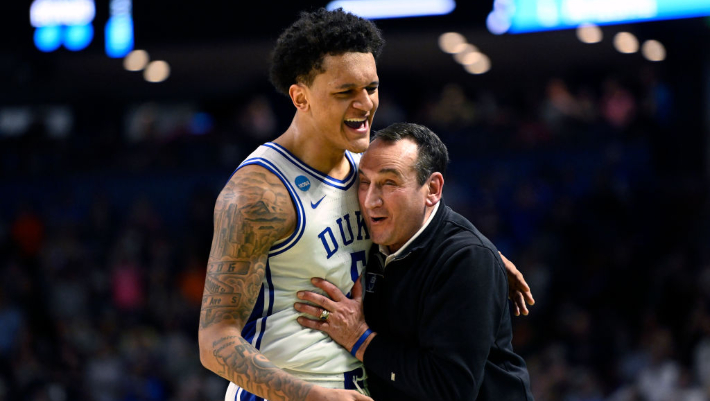 The Duke Blue Devils are on their way to New Orleans. Duke took on Arkansas in the Elite 8 on Saturday evening, and thanks to a 78-69 win, Mike Krzyzewski is taking a team to the Final 4 for the 13th time, breaking a tie with the late John Wooden for the most appearances in the Final 4 in a coaching career.

Coach K, of course, will see his career come to an end whenever the Blue Devils are eliminated, as it was announced before the season that he is going to retire and hand the program over to former player and current associate head coach Jon Scheyer at its conclusion. But for now, the team is cruising along, even if its head coach got a little annoyed at one of his presumed lottery picks in the 2022 NBA Draft.

In the game’s immediate aftermath, Coach K gave an interview to Tracy Wolfson of CBS when two of his players, Wendell Moore and Paolo Banchero, walked up and embraced him. Banchero took a moment to say “this is the GOAT” right here, which Krzyzewski did not enjoy.

Duke doesn’t play again until next Saturday — they’ll either play North Carolina or Saint Peter’s — so if we hear that Banchero had to run a few sprints in practice on Monday, we can probably assume this is why.