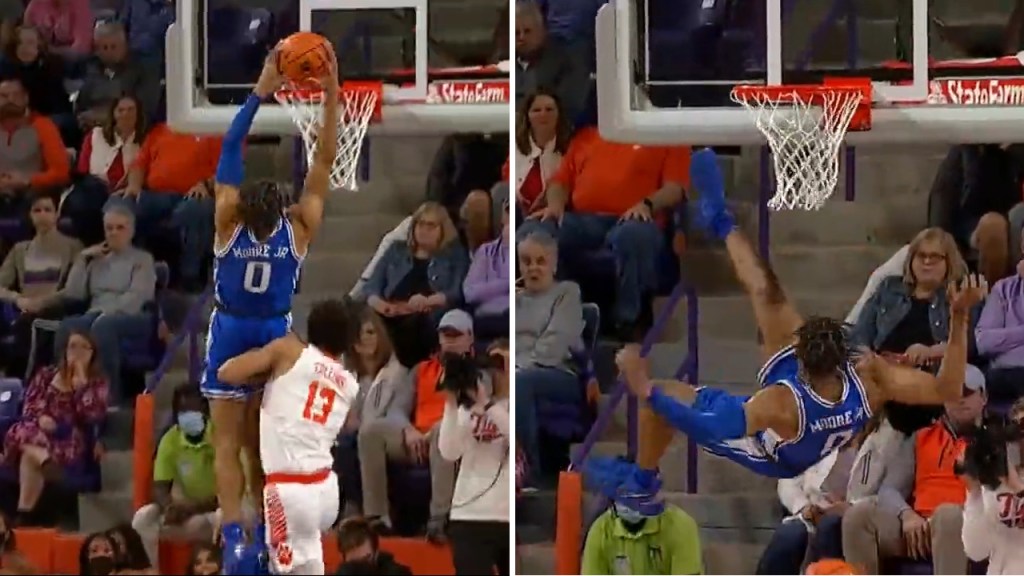 Mike Krzyzewski and the Duke Blue Devils are off to a strong start this season, posting a 19-4 record and a 9-3 mark in ACC play to earn a top-10 national ranking. However, Duke fell short in its last game, losing at home to an underwhelming Virginia squad, and the Blue Devils aimed to right the ship with a road trip to Clemson on Thursday. For the most part, it was a positive evening for the Blue Devils, with Duke eventually picking up an 82-64 victory over the Tigers, but the most memorable moment of the evening wasn’t so friendly in that it involved an incredibly dangerous play from Clemson guard David Collins.

Duke junior Wendell Moore Jr. came up with a steal late in the first half and looked to have an easy bucket in transition. Rather than allow a dunk, Collins sprinted back, but what transpired was a reckless foul that was eventually ruled a Flagrant-2 and an ejection.

Rather than contesting the shot, Collins made no play on the ball, instead shoulder-blocking Moore in mid-air and causing him to flip off of the rim and onto his back. Fortunately, Moore was able to stay in the game and avoid serious injury, but even the Clemson broadcast immediately acknowledged the severity of Collins’ actions.

Coach K was rightly livid and, as the ESPN broadcast described, this very easily could have turned into a full-on brawl. Collins did go over and speak with Coach K, who gave him a hug and things seem to get smoothed over at that point.

It will be interesting to see if Collins receives any additional punishment, but the senior guard was rightly ejected for a hideous play.