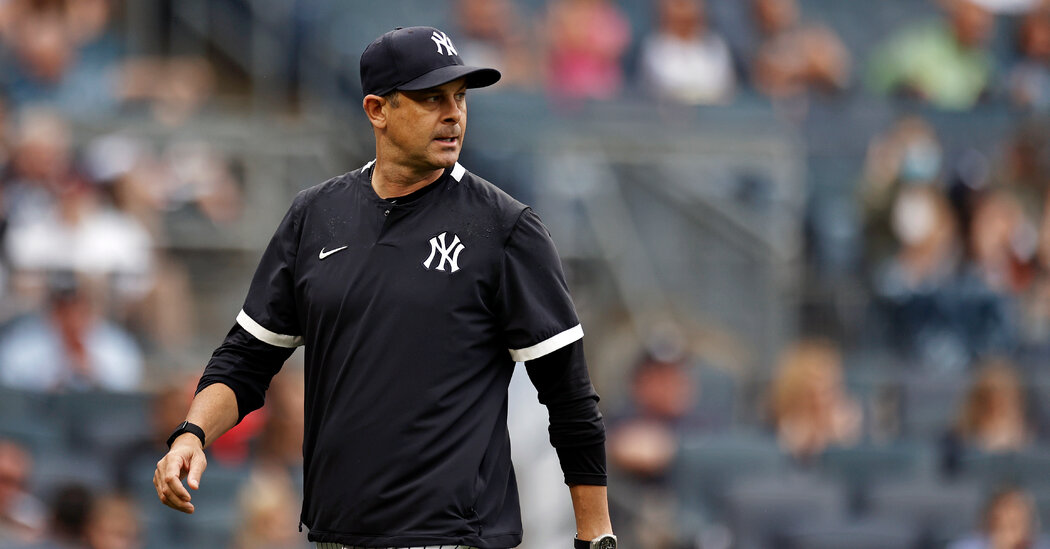 The Yankees re-signed Manager Aaron Boone on Tuesday, inking him to a three-year deal that includes a club option for the 2025 season. But in making the announcement, the team’s owner made the marching orders abundantly clear for a franchise that has reached the playoffs in four straight seasons under Boone but has been bounced earlier and earlier each October: Get better.

“We have a person and manager in Aaron Boone who possesses the baseball acumen and widespread respect in our clubhouse to continue to guide us forward,” Hal Steinbrenner, the Yankees’ managing general partner, said in the team’s statement.

“As a team and as an organization, we must grow, evolve and improve. We need to get better. Period. I know Aaron fully embraces our expectations of success, and I look forward to drawing on his intelligence, instincts and leadership in pursuit of our next World Series championship.”

In video calls with reporters on Tuesday, Yankees General Manager Brian Cashman and Boone, whose past contract expired after this season, certainly agreed.

“I can help lead us to the top,” said Boone, 48. “That’s why I’m here. That’s why I came back. That’s why I originally signed up to come here. That’s what I’m chasing. Just personally trying to continue to improve and grow in this job and ultimately, though, the proof will be in the pudding.”

Added Cashman: “Are we good enough? The answer is no. Do we need to be better at what we do? The answer is yes. Do our fans deserve the best of the best? Always. I’m proud of what I’ve accomplished and I regret what my failures are.”

Cashman, 54, reiterated what he had throughout the Yankees’ seesawing 2021 season: Boone was “part of the solution. He wasn’t a problem or the problem.”

Despite two weeks passing since the Yankees lost the American League wild-card game to the Boston Red Sox — a delay Boone attributed to him weighing his future with his family, the changes to his coaching staff and negotiating with the Yankees — Cashman said “there was never a doubt” on his end that he wouldn’t re-sign Boone.

“A manager is only as good as the players he’s got,” said Cashman, who is unsigned past the 2022 season. “Aaron’s pretty damn good at his position. And as I’ve talked to players on our club, we need to demand excellence from them in all categories and find ways to extract that out of them. But I also need to find as many great teammates to surround them with.”

Cashman likened the 92-win 2021 Yankees to Dr. Jekyll and Mr. Hyde, at times appearing “unstoppable” and at times “unwatchable.” He said the teams went “backwards in categories we certainly didn’t see coming or expect.” One issue he cited: The team’s offense, a strength in previous seasons, was inconsistent and finished 19th out of 30 teams in the major leagues in runs scored per game (4.39) and had the sixth highest strikeout rate (24.5 percent).

“We’re not as athletic as we’d like to be, and certainly not as contact-oriented,” Cashman said. He added that he and the front office needed to set a better buffet table of options — players, in other words — for Boone and the coaches.

Cashman said the Yankees would be in the market for a shortstop because Gleyber Torres, who sputtered this season, was better suited for second base. But he didn’t close the door on changing the catcher — Gary Sanchez hit 23 home runs but regressed in other ways — or overhauling more positions.

Relying on many of the same key players over the past four years, the Yankees have posted a 328-218 regular-season record under Boone. He joined Mike Matheny (formerly of the St. Louis Cardinals) as the only people in major-league history to reach the postseason in each of their first four seasons as a manager.

Despite the talented, albeit imperfect, rosters and large payrolls, the Yankees’ title drought has reached 12 seasons. The past two years have been more of a struggle. After winning the American League East in 2019, they couldn’t catch the smaller-market, smaller-payroll Tampa Bay Rays in 2020 or this year, reaching the playoffs as a wild-card team instead — and not getting far after that.

“In other years that we were knocked out, we had a legit shot to take a run at the American League title and represent the league in the World Series, and see where that would take us,” Cashman said. “This particular year, I thought we had a chance to do some damage and maybe continue on, but it looked like the way our season was going at times that it also could be a first-round knockout, and that’s what actually happened.”

Boone returns to a coaching staff that will be dramatically different than any other under his tenure. Last week, the Yankees informed three coaches who had been with Boone since the beginning of his tenure that they would not be returning — the two hitting coaches and his close friend and third base coach, Phil Nevin.

“I don’t want to just say we need to get better — that’s obvious,” Boone said. “It’s important to acknowledge that I do feel like we do have the people in place to get it done. There’s got to be tweaks. There’s got to be adjustments. Starting from my standpoint, and in our coaching staff, we’ve all got to get a little bit better and making sure we hold each other accountable.”