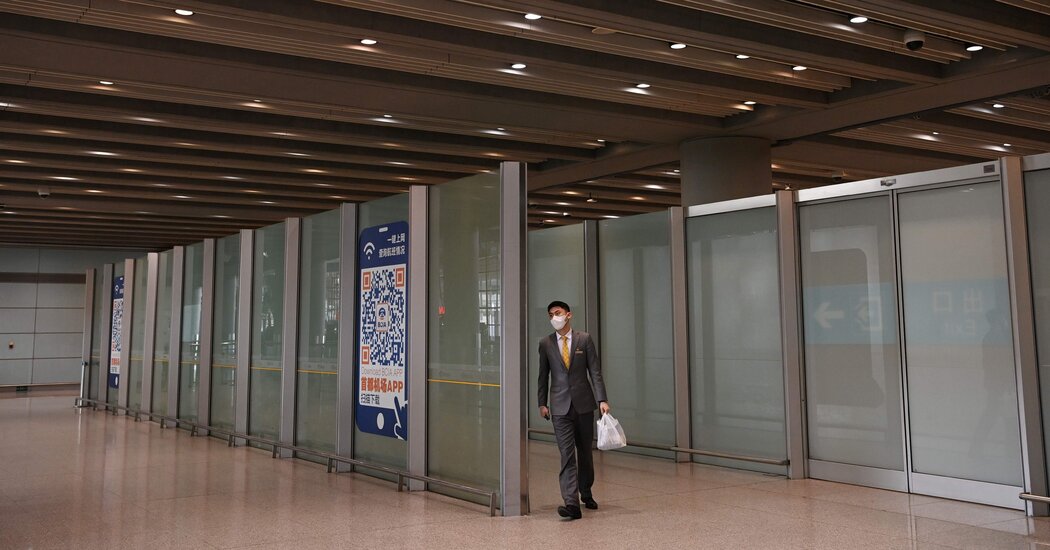 As cases of the coronavirus continue to climb worldwide, many countries are doubling down on testing policies that can grant or bar entry to travelers attempting to move across international borders.

But an unusual new testing policy, announced by China at the end of October, has health experts baffled. It requires inbound travelers to present negative results from an antibody test — which can neither reliably rule out infections nor prove that a person is not transmitting the virus to others.

“I don’t understand why they would be doing this,” said Dr. Krutika Kuppalli, an infectious disease physician at the Medical University of South Carolina. “It seems like this is their method of security theater.”

The strange guidelines, experts said, seemed to reflect an outdated understanding of the ways in which the virus and the immune system interact. In the spring, several companies attempted to market antibody tests as potential diagnostics of active infection. Some (but not all) later tempered or walked back these advertisements as researchers gathered more information about the timing of the antibody response to the virus, which does not kick into gear until levels of the pathogen are waning.

“I thought we were past this stage,” said Elitza Theel, a clinical microbiologist and expert in antibody testing at Mayo Clinic in Rochester, Minn. Guidelines from the Centers for Disease Control and Prevention describe antibody positives as a generally poor proxy for the presence of active virus in the body.

Previous iterations of China’s policies stipulated that travelers would need to test negative only by a “nucleic acid test,” a tool that hunts for the coronavirus’s genetic material. Most available tests that meet this requirement rely on a laboratory technique called polymerase chain reaction, or P.C.R., which can home in on the virus even when it is present at very low levels in the body.

But as the coronavirus continued to spread in countries like the United States, the United Kingdom, Ireland, and Russia, Chinese health officials became concerned that some foreign travelers might slip through the diagnostic cracks. The officials opted to pair P.C.R. with a second test to help ensure “greater accuracy in Covid-19 screening,” a spokesperson for China’s embassy in the United States wrote in an email.

In theory, that could be a sound strategy, said Deepta Bhattacharya, an immunologist at the University of Arizona: “We’re fans of being able to check with two independent kinds of tests.” But the approach quickly falls apart, he added, if officials select the wrong test as a safety net, as appears to be the case with China.

In addition to requiring negative nucleic acid test results, China now asks travelers to prove they have tested negative on an IgM antibody test, taken within 48 hours of boarding. These tests detect disease-fighting molecules called antibodies, in particular one called immunoglobulin M, or IgM, which is usually the first type of antibody roused against infectious invaders. IgM’s presence is ephemeral; eventually, two other types of antibodies that are much longer-lived, called IgG and IgA, take over.

It’s possible that an IgM test might turn positive as the virus is on its way out of the body, Dr. Theel said. But these products look for a delayed reaction to the virus, rather than the virus itself. As such, the absence of IgM does not guarantee a person is virus-free.

Many tests designed to detect IgM have bedeviled researchers with false positives, mistakenly identifying antibodies in people who actually lack them. “Some of these tests are kind of garbage,” Dr. Kuppalli said.

In the spring, faulty antibody tests flooded the market after being hastily greenlit by the Food and Drug Administration. Alarm about their poor accuracy prompted the agency to revoke clearance of several products. Test quality has improved substantially since then, but IgM remains difficult to accurately detect compared with other antibody types.

When asked whether these concerns would be addressed by China’s new testing policy, the embassy spokesperson said only that the IgM antibody test was capable of producing “stable” results. Combining nucleic acid tests and IgM antibody tests “has been put into practice in some countries on a trial basis, and is working well,” said the spokesperson, echoing earlier comments made at a news conference. The spokesperson did not respond to repeated requests for clarification or comment on which countries had implemented such protocols, or whether data existed to support the efficacy of the dual-test tactic.

Another concern, Dr. Theel said, is that IgM tests can also be very difficult to find. The new requirements could raise needlessly stressful barriers for people trying to make their way home, and waste time and money. “That is a huge inconvenience, for a test that adds, in my opinion, minimal value,” she said.