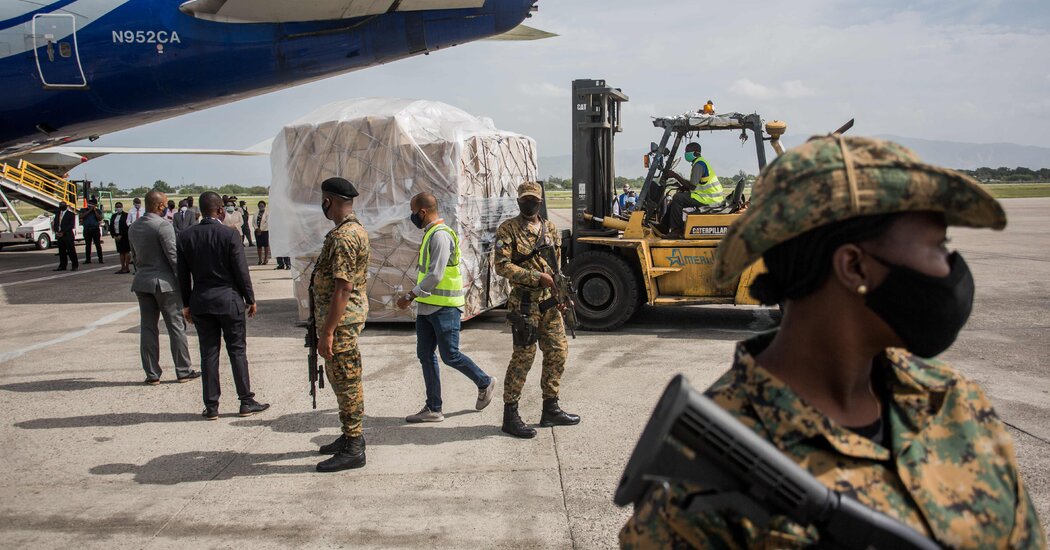 MEXICO CITY — China has offered Jamaica loans and expertise to build miles of new highways. Throughout the Caribbean, it has donated security equipment to military and police forces, and built a network of Chinese cultural centers. And it has dispatched large shipments of test kits, masks and ventilators to help governments respond to the pandemic.

The initiatives are part of a quiet but assertive push by China in recent years to expand its footprint and influence in the region through government grants and loans, investments by Chinese companies, and diplomatic, cultural and security efforts.

But while governments in the region have welcomed Beijing’s interest, the Trump administration has viewed China’s growing presence — and its potential to challenge Washington’s influence in the region — with concern and suspicion.

The Caribbean markets are generally small, and most of the nations there lack the sizable reserves of minerals and other raw materials that often draw Chinese attention. But the region has strategic importance as a hub for logistics, banking and commerce, analyst say, and could have great security value in a military conflict because of its proximity to the United States.

“There are a lot of reinforcing reasons that go beyond balance sheets,” said R. Evan Ellis, research professor of Latin American studies at the U.S. Army War College’s Strategic Studies Institute. “China understands intuitively the strategic importance of that space.”

China’s efforts in the region are part of its global strategy to forge deep economic ties and strong diplomatic relationships around the world, in part through the building of major infrastructure projects under its ambitious Belt and Road Initiative.

A crucial motivation for China’s Caribbean strategy also is winning over the remaining nations that officially recognize Taiwan instead of China, most of which are in the Caribbean and Latin America, said Richard L. Bernal, a professor at the University of the West Indies in Jamaica and former Jamaican ambassador to the United States.

China considers Taiwan to be part of its territory and has long sought to reduce the number of countries that recognize it. But recently Taiwan’s international stature has grown with its aggressive response to the coronavirus pandemic.

“China’s objective is to gradually eliminate the recognition of Taiwan,” Mr. Bernal said.

China’s growing interest has come as much-needed help for Caribbean nations that have serious infrastructure needs but whose status as middle-income countries complicates their access to financing for development.

Low-interest loans by the Chinese government totaling more than $6 billion over 15 years have financed major infrastructure projects and other initiatives throughout the Caribbean, according to the Inter-American Dialogue, a research organization based in Washington. The total climbs by $62 billion with the addition of assistance to Venezuela, much of it given in return for long-term oil supplies.

During the same period, Chinese firms have invested in ports and maritime logistics, mining and oil concerns, the sugar and timber industries, tourist resorts and technology projects. Between 2002 and 2019, trade between China and the Caribbean rose eightfold, said Mr. Ellis, the professor at the U.S. Army War College.

China’s global push for business and allies has generated criticism, particularly in the United States and Western Europe, which have called the Belt and Road Initiative predatory. In 2018, Sri Lanka, unable to repay Chinese loans, surrendered its major port to China.

But analysts who closely follow Chinese activity in the Caribbean say that while there is some concern about the sustainability of some of the debt assumed by regional governments, they have seen no evidence of a debt trap as in the case of the Sri Lankan port.

“The loans are not only economic business but also a way of building good will,” said Mr. Bernal, the professor at the University of the West Indies.

Jamaica, which has emerged as an anchor of Chinese activity in the Caribbean, has received more Chinese government loans than any other Caribbean island nation, according to the Inter-American Dialogue, which closely tracks Chinese government financing in the region.

Over the past 15 years, Beijing has lent Jamaica some $2.1 billion for building roads, bridges, a convention center and housing, according to the group. Grants have financed a children’s hospital, schools and an office building for the Ministry of Foreign Affairs, among other projects, according to the Planning Institute of Jamaica.

And direct investments from Chinese firms in Jamaica poured more than $3 billion into projects like bauxite mining and sugar production, Chinese business leaders said, according to local news reports.

Last November, the Jamaican government announced that it would stop negotiating new loans from China as part of its effort to reduce debt quickly, but would continue to cooperate with the Chinese on major infrastructure projects through joint venture and public-private partnerships, among other arrangements.

But Jamaican officials say outstanding Chinese loans are not putting an extraordinary burden on the country: They amount to only about 4 percent of Jamaica’s total loan portfolio and are scheduled to be repaid within a decade.

China has also widened its influence in the Caribbean through security cooperation, including the donation of equipment to military and police forces, and cultural outreach programs, like the expansion of its network of Confucius Institutes. These institutes provide language instruction and cultural programming but have been accused of disseminating Chinese government propaganda.

The pandemic allowed China to strengthen these relationships further by donating or selling personal protective equipment, in what has come to be called “mask diplomacy.” The Chinese foreign minister, Wang Yi, pledged in July that China would extend $1 billion in loans for vaccines to Latin American and Caribbean countries.

Even as it has increased its presence in the region, China has avoided directly challenging the United States in the Caribbean through rhetoric or military and political initiatives, Mr. Ellis said.

Still, China’s rise in the Caribbean pushed the Trump administration to forcefully promote its own development programs. These include “Growth in the Americas,” an investment initiative begun last year that many analysts viewed as a direct response to China’s diplomatic and trade efforts in the Caribbean and Latin America.

The United States has also stepped up warnings to allies in the region about the risks of doing business with Beijing, underscoring what it says are potential hazards ranging from shoddy construction to predatory loans and espionage.

In recent weeks, the American ambassador to Jamaica, Donald Tapia, has cautioned that country against installing fifth-generation mobile networks made by Huawei and ZTE, two Chinese firms, warning in a Twitter post that “Huawei has a history of spying, stealing, and supporting authoritarian regimes.”

Last November, Mr. Tapia, in an interview with the Jamaica Gleaner, called China “a dragon with two heads,” the newspaper reported.

During a visit to Jamaica in January, Secretary of State Mike Pompeo said it was “tempting to accept easy money from places like China.”

“But what good is it if it feeds corruption and undermines your rule of law?” he asked. “What good are those investments if in fact they ruin your environment and don’t create jobs for your people?”

The Chinese Embassy in Kingston, in a statement responding to Mr. Pompeo’s remarks, said it had deepened its involvement with Caribbean states “on the basis of mutual respect, equality and mutual benefit.” And it accused the United States of picking fights.

“It seems that some U.S. politicians cannot go anywhere without attacking China, tarnishing China’s reputation, starting fires and fanning the flames and sowing discords,” the Chinese Embassy said. “They can go on talking the talk if they so wish, but we will continue walking the walk. The world will tell plainly who is stirring up trouble and who is trying to make a difference.”

The deepening competition between the two superpowers has put Caribbean nations in an awkward position, and they do not want to be forced to pick sides, said Pepe Zhang, an associate director at the Atlantic Council’s Adrienne Arsht Latin America Center.

“They want to be able to work with both the United States and China in areas that make sense,” he said. “And I think that’s something that will be even more true now that the region is going through a very difficult economic recession.”