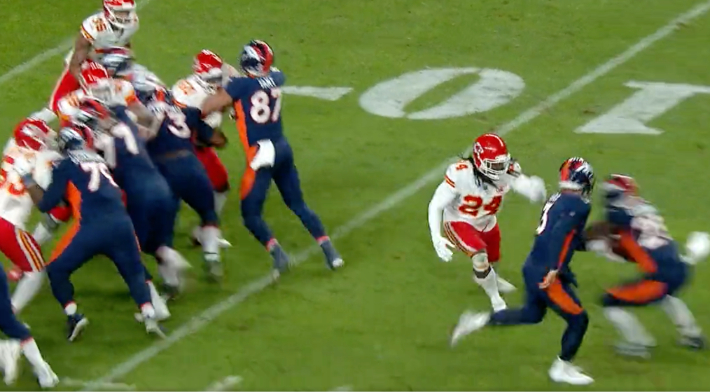 Week 18 of the 2021 NFL season kicked off on Saturday afternoon with an AFC West tilt. The Kansas City Chiefs, still in contention for the 1-seed in the AFC, traveled to Denver to take on the Broncos, and while they’re unable to qualify for the postseason, the team was playing for pride due to the fact that they’ve lost their last 12 games against the Chiefs.

It looked like Denver was well on its way to making that happen — the team boasted a 21-20 lead in the fourth quarter and faced a second-and-2 from its own 9-yard line. The Broncos called for a handoff to Melvin Gordon, who wanted to rumble forward and pick up the first down. Unfortunately for him, Melvin Ingram had other ideas, as the Chiefs’ linebacker did not get blocked and strolled right into the backfield and blew things up.

Gordon barely had time to get his hands on the ball, so when Ingram pummeled him, rookie linebacker Nick Bolton was able to scoop things up. Thanks to a business decision by former college teammate Drew Lock, Bolton was able to sprint 86 yards to the end zone to give Kansas City the lead.

Upon getting the football back, the Broncos, facing a 28-21 deficit in the fourth quarter, marched down the field and kicked a field goal on fourth-and-9 from Kansas City’s 13.