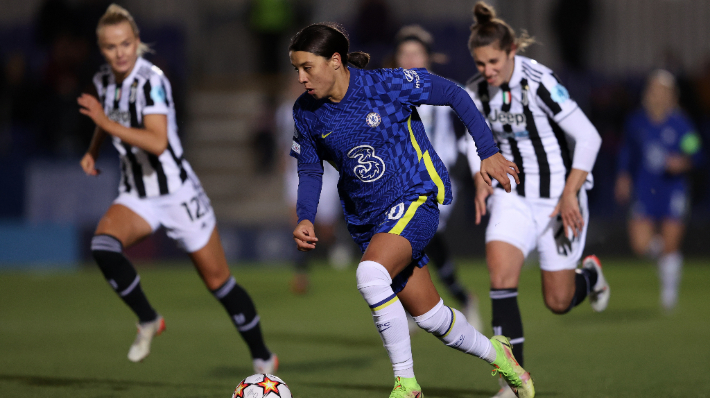 Chelsea and Juventus squared off on Wednesday in a gigantic game in Group A of the UEFA Women’s Champions League. While the game ended in a scoreless draw, one moment involving Chelsea standout Sam Kerr is drawing headlines, largely because no one seems to be sure why, exactly, it happened.

Kerr — who recently finished in third place in the Ballon d’Or Féminin, given annually to the best women’s footballer in the world — was standing on the pitch when some dude thought it’d be fun to run around and try to get a selfie with one of her teammates, Magda Eriksson. The fans in attendance very obviously thought he was a doofus, but he wouldn’t leave and it didn’t seem like anyone was trying all that hard to get him off the pitch.

So Kerr decided, when he got near here, to just hip check the guy and and flatten him. The crowd, unsurprisingly, loved it.

Despite their cheers, Kerr got a yellow card.

I have never seen that at a women’s game…Pitch invader, Sam Kerr pushes him over and gets a yellow card. Bizarre.

That’s the first time I’ve ever seen that at a Women’s game , a pitch invader trying to get a selfie but Sam Kerr pushes him down and then gets booked. Absolutely bizarre , never seen anything like that. First time for everything #UWCL

As for the game itself, Chelsea outshot Juventus, 25-2, but was unable to break the deadlock. They sit atop their group on 11 points while Wolfsburg and Juventus both have eight. With the top-2 qualifying and Chelsea taking on Wolfsburg on the final match day in group play — Juve play Servette FCCF, a Swiss club that has a -19 goal differential and hasn’t registered a point — a result should see the Blues through. Hopefully there are no pitch invaders this time.