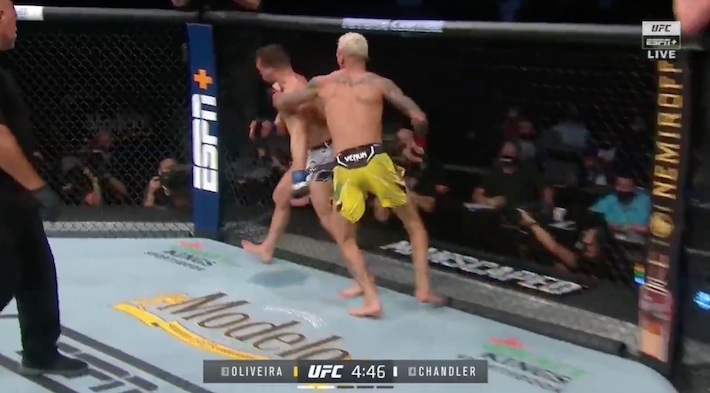 Charles Oliveira is the new lightweight king. After Khabib Nurmagomedov officially stepped away from the Octagon, Oliveira took the reins of the division TKOing Michael Chandler in the main event at UFC 262 from the Toyota Center in Houston.

Oliveira came flying out of the gate with a sweeping leg kick that sent Chandler to the ground. Chandler jumped to his feet and followed with a handful of wild shots, catching Oliveira with a big hook. Chandler took Oliveira to the ground with a guillotine, but Oliveira transitioned out and took Chandler’s back.

Chandler exploded up, waiting for Oliveira to get to his feet before hurting his opponent again with a slew of huge lefts and rights. Chandler dropped Oliveira, but couldn’t finish the job, moving into Oliveira’s guard on the ground before the end of the round.

Mere moments into the second round, Oliveira stunned Chandler with a big counter left hook that sent him stumbling backwards and finished the job with Chandler on his back.

Oliveira won his last eight bouts dating back to 2018, with his last victory coming in a decision win over Tony Ferguson in December.

Chandler is a three-time lightweight champion in Bellator, concluding his run with the promotion with back-to-back knockout wins over Sidney Outlaw and Benson Henderson before jumping into the UFC with a first-round TKO of Dan Hooker in January.