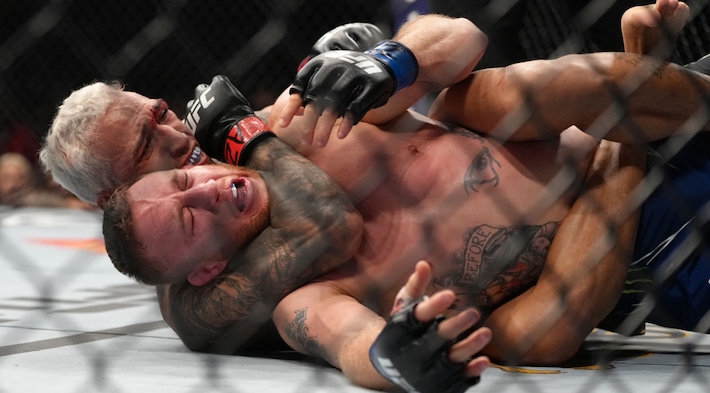 Charles Oliveira (32-8, 1 NC) submitted Justin Gaethje in the main event of UFC 274 at the Footprint Center in Phoenix, Arizona, Saturday night, but the lightweight title will remain vacant for now.

Despite getting Gaethje to tap, he can’t retain the belt after missing weight.

The main event got thrown a major curveball during weigh-ins on Friday afternoon when the lightweight champion, Oliveira, failed to make weight and was stripped of the title that he’s held for nearly a year. Oliveira’s attempt to make weight saw him come in at 155.5 pounds, just a half-pound above the maximum weight for the title fight.

As for the fight, Gaethje and Oliveira traded big shots to open the fight, with the former champ stunning Gaethje, only for the challenger to respond with a huge leg kick. Gaethje sent Oliveira backward on the mat twice with two huge shots, the second of which opened up a nasty gash on the former champ’s left eye.

Oliveira snapped a big right that sent Gaethje on his back, then moved in to take his back and submitted the challenger to close out his night.

With the win, Oliveira now hasn’t lost in five years, including wins over Dustin Poirier, Michael Chandler, and Tony Ferguson. As for who he’ll fight now as the No. 1 contender for the lightweight belt, Oliveira said after the bout that he doesn’t have a preference, but did question if Conor McGregor is ready to step back inside the Octagon.