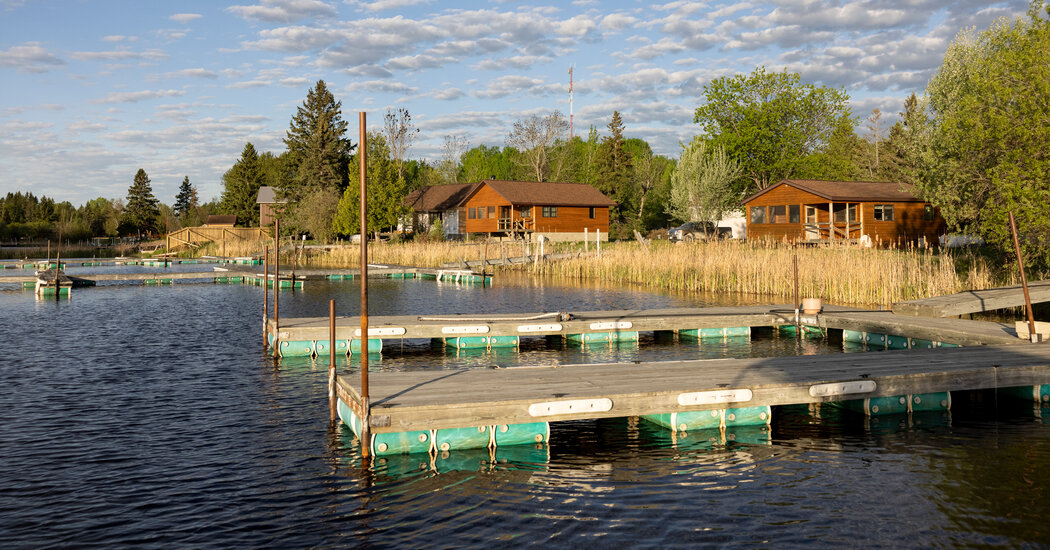 ANGLE INLET, Minn. — On the Northwest Angle, a small patch of Minnesota connected to the rest of the United States only by water, it feels like the coronavirus shutdown never ended.

But the empty cabins, boatless marinas and out-of-work fishing guides are not the result of some lockdown imposed by Minnesota’s governor. Nor do they indicate an acute fear of the virus. (Many residents are already vaccinated, and pretty much nobody wears a mask.) Instead, in the second walleye season of the pandemic, American businesses on the Angle remain largely cut off from their American customers because of a geographical quirk, a foreign government and a gravel road through Manitoba.

“It starts to feel very oppressive,” said Lisa Goulet, who along with her husband, Jason, owns Angle Outpost Resort, where there were no customers early last week. “I don’t know if I want to live like this. I don’t know if it’s really worth it.”

Getting to the Angle, which has about 100 full-time residents and an economy consisting of little other than tourism, has always required some extra effort. There is only one road in, and driving there from the Minnesota mainland requires a 41-mile detour through rural Canada. Those wanting to avoid the border crossing have to charter a seaplane or take a boat across the olive-colored waves on the Lake of the Woods, which can be dangerous in a small fishing vessel and cost at least $150 round trip in a professionally piloted one. An ice road that offered a two-month respite from the border headaches has long since melted.

Over the decades, the small, family-owned resorts on the Angle cultivated loyal followings of American visitors who tolerated the chore of clearing customs in Canada, and then again in the United States, so they could enjoy world-class fishing, pine-scented forests and a level of solitude offered by few other places in the Lower 48.

But that solitude, more evident than ever, is no longer such an asset.

Canada’s continued Covid prohibition on American leisure travelers — even those whose final destination is in the United States — has crippled Angle businesses, upended family traditions and eroded decades of cross-border good will in ways that seem likely to reverberate long after the pandemic. As pleas from Minnesota’s congressional delegation for a tourism exemption on the Angle go unheeded, resort owners and fishing guides are seeking part-time jobs, canceling another summer of bookings and, in some cases, rethinking their relationship with a foreign country they can see from their docks.

“I didn’t think Canada would ever take this position,” said Paul Colson, whose family has since 1945 owned Jake’s Northwest Angle, where boat slips are empty this spring and cabins unrented. “You know, it’s not defendable. Doesn’t make sense. Doesn’t follow any science.”

The Northwest Angle, which owes its existence to treaties negotiated when maps of the region were imprecise, has been the subject of diplomatic tangles before. Canada and Britain tried without success to purchase the area back from the United States in the 1800s. And just a generation ago, a trade dispute known as the “Walleye Wars” broke out over whether guests of American resorts could keep fish caught in Canadian waters, inspiring some talk of secession.

But in a place where both U.S. and Canadian flags can be spotted along the roadside, and where many people have friends and relatives on both sides of the line, this latest dispute feels different. More personal. More painful.

The border, long permeable, has suddenly hardened. The few visitors who still arrive are no longer allowed to fish in Canadian waters, an area many fishermen prefer. And ideas for a compromise — an international travel corridor, perhaps, or a pilot car to escort tourists to the Angle without coming in contact with Canadians — have not yet gained traction. Officials at the U.S. State Department declined to speak specifically about the Angle and would not say whether they had pressed Canada for concessions there.

Every passing day costs the business owners more money. In a region where summer weather is fleeting, and where snow flurries can appear even in late May, there is little time left to save this tourism season.

“This is absolutely urgent: I don’t think that all of them can survive a second summer of no business,” said Representative Michelle Fischbach, a Republican who represents the Angle in Congress and who sent a letter this month to Canada’s prime minister, Justin Trudeau, asking for the restrictions to be loosened.

Though Canada relaxed its rules recently to allow full-time Angle residents to travel to mainland Minnesota to shop for groceries and other essentials without producing a negative Covid-19 test, tourists and part-time Angle residents, including those who own cabins but only stay in them during the summer, are still not allowed in.

A senior Canadian diplomat, who spoke on the condition of anonymity to discuss the sensitive and fast-moving issue, said officials in that country were sympathetic to the plight of Angle businesses and expressed optimism that restrictions might be loosened for vaccinated travelers later in the summer. Kirsten Hillman, Canada’s ambassador to the United States, said in a statement that she had discussed the Northwest Angle with Senator Amy Klobuchar of Minnesota, but Ms. Hillman gave no timeline on when that border might more fully reopen.

“With the Angle, given the small numbers there you’re dealing with, I think there’s some unwillingness to look at making exceptions,” Ms. Klobuchar, a Democrat, said of the Canadians. “And I really think they have to look at this uniquely.”

Now is the time when the Angle usually comes alive. In a typical year, locals say, boat traffic jams would be forming in the marina at Young’s Bay and visitors would be snapping photos next to the brightly painted sign noting the Angle’s status as the northernmost point in the contiguous 48 states.

But there is no wait for a table these days at Jerry’s Bar and Restaurant, the only eatery on the Angle, and no one is lining up to use the phone booths where visitors who cross the border must report their whereabouts to customs agents. Some resorts have not had a customer since ice fishing season.

Throughout the Angle, where black bears and deer graze along dusty roads, residents speak of disrupted lives: Funerals on the mainland missed, jobs lost, travel plans canceled. There is a growing feeling of helplessness, too, a sense that neither country cares enough about their predicament to do much about it.

“We’ve been forgotten; we’ve been abandoned,” said Doug Freitag, a retiree who has been looking after the cabins of neighbors who are not able to visit, and whose wife lost her income as a housekeeper at local resorts. “The U.S. isn’t doing enough to give us our rights as citizens for free passage. The Canadians are treating us like we’re a very unique group of people that they don’t quite know how to deal with.”

When the United States and Canada decided last year to close down the border to traffic deemed nonessential, many Angle residents said they were sympathetic, even supportive. But as the closure stretched from weeks to months, patience grew thin.

“They’re just prolonging the problem, thinking that they’re going to stop Covid,” said Andy Lundbohm, a fishing guide on the Angle for more than 20 years who took on more taxidermy work to make up for lost income. Ms. Klobuchar, Ms. Fischbach and some other American politicians have also pressed for a broader reopening of the border. But many Canadians remain deeply skeptical about allowing more international travel, and officials there have faced domestic pressure to keep restrictions in place.

Some of the tension lies in the two countries’ very different approaches to the pandemic.

In the United States, businesses have reopened, domestic tourism has resumed, vaccines are plentiful and, with case numbers plummeting, fully vaccinated Americans have been advised that they don’t need masks in most settings. In other parts of Minnesota, including other portions of the Lake of the Woods, which has more square miles of water across the two countries than Rhode Island has land, fishing resorts are booming.

But in Canada, which has far fewer total cases per capita than the United States, the recent virus outlook has been less encouraging, and business restrictions have remained in place across much of the country. Manitoba has been identifying new cases at a faster pace than any other state or province, and the vaccination campaign in Canada has moved much more slowly. Though roughly half of both Americans and Canadians have received an initial dose of a vaccine, only about 5 percent of people in Canada are fully vaccinated, compared to about 40 percent of people in the United States.

James Cudmore, a spokesman for Canada’s minister of public safety and emergency preparedness, said in a statement that the uptick in vaccinations made an eventual loosening of regulations possible, but that “the decision on when and how to reopen the border will be made in Canada, with the best interest of Canadians as our top priority.”

At the Angle Outpost Resort, where geese huddled near the choppy water on a recent afternoon as Ms. Goulet mowed, it was already shaping up to be another rough summer.

Bookings were down, cancellations were still rolling in and uncertainty over when and if the border might reopen made it difficult to reschedule customers. Mr. Goulet was planning another trip to North Dakota, where he has been working in construction to make up some of his lost income from the resort. And at a time when many Americans had returned to a relatively normal routine, the family had grown exhausted with trying to convince Canadian border guards that each trip down to the mainland met that country’s definition of essential.

How Green is Your Cruise?

Is Responsible Travel to Hawaii Fun?

Regional Airports Have Lost a Large Number of Flights