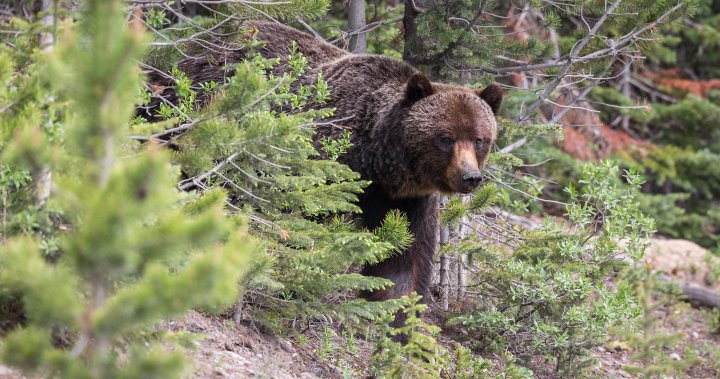 It’s been one month since Peter Graham was attacked by a charging mama grizzly bear in Kananaskis Country.

But every second of the terrifying ordeal is still vivid in his mind.

“I’ve encountered many bears before, but at that moment it was like part of my brain knew exactly what was going to happen, but the other part of my brain was in denial of what was happening,” said the 38-year-old, “Because I knew with her two cubs there, I was in serious danger.”

Graham has been exploring the mountain ranges around Canmore since he was a teenager. He often hikes alone and is drawn to the paths less trodden by the masses.

On Sept. 26, he set out to the Highwood Pass area in Kananaskis Country, but he said it was crammed with cars.

“There were hundreds of people at Highwood Pass  and I wanted to be somewhere that was off on my own,” he said, opting for a different trail a few kilometers away. “I had been in that area before,” he said.

But about an hour and half in the splendor of the turning larches, his solitude was shattered when he and a bear startled each other.

“It was so close that we surprised each other. I remember that she turned her head to look at me and she started running toward me in a full sprint,” he said, ” It was too late to do anything. All I  could do was put my hand in front of me.”

“She came at me full force. She came at me with her mouth wide open and instantly enveloped my head and bit down on it, causing massive lacerations in an instant.”

Graham was carrying bear spray with him, but he said in that moment it wasn’t accessible enough and he didn’t have enough time to use it.

“Definitely moments of terror there. She moved with such power. Once I was down on the ground she moved to other parts of my body. She bit my abdomen, my legs, and shook me around by my legs. I had my eyes closed for most of it,” he said.

Graham said it all happened in mere seconds and then the bear calmly walked away and he didn’t see her again. He said the first  thing he did was reach for a roll of gauze and wrap it around his bleeding head and then he pressed the SOS button on his emergency GPS.

“I would of had to bushwhack  my way down the highway, I would have been a bloody wreck along a random spot of the  highway without it.”

An hour later  he heard the buzz of a helicopter overhead and saw the rescuer and a long line, triggering another bolt of adrenaline in his already shocked body.  While he said he’s always tried to mentally prepare for an event like a bear attack or being rescued from the backcountry, nothing could have prepared him for that experience.

“To be literally flying under a helicopter…that was a surreal experience. Thanks to the [rescuer] who clipped me in, I could see his demeanor was just another day at the office really that helped reassure me.”

Graham was rushed into surgery in Calgary. He said he had 46 staples in his head and 26 stitches in his face. He sustained injuries to just about every part of his body, but is expected to make a full recovery.

According to Alberta Environment and Parks there have been nine grizzly bear attacks in Alberta, three of them were deadly including one by a black bear. In 2020 there were four attacks and one fatality.

“There’s a lot of people running around in the mountains right now and the end result is there’s going to be interactions with wildlife when that happens. ” said Jay Honeyman, a biologist with Alberta Fish and Wildlife. ” The chances are extremely unlikely it’s going to happen, but it can happen. This is kind of an extreme example of what could happen,” said Honeyman.

Graham said he was interviewed by conservation officers while in hospital and asked that the bear be left alone.

“They closed the area and the bear could  be on its own. I would be heartbroken to know anything happened to the bear, if it was to be destroyed because the bear was just acting instinctually.  I thought she posed no further threat to anyone,” said Graham.

He is grateful to the rescue team that long-lined him out that day and the paramedics that met him at the staging area. He credits a team of nurses and doctors for getting him to where he is today, doing remarkably well considering his ordeal.

While the scars on the outside of his body are still healing, he insists that’s the only place he’s been injured.

“I’ve always had some mental preparation if something were to happen to me. It was a very traumatic day, but in the end, because I’ve always kind of prepared myself and known people who have had dangerous things happen to them, I haven’t suffered any trauma from it,” said the decades-long hiker.

He said next time he will be sure to make more noise and keep his bear spray even more accessible. He urges others to know their own limits and always be prepared for everything.

“I had a bear dream and I was hiking along this trail and a bear ran towards me near my feet and I started petting him. Kind of a bizzare dream. There’s going to be hazards and risk and consequences you have to face but it’s not going to prevent me from going out there again.”