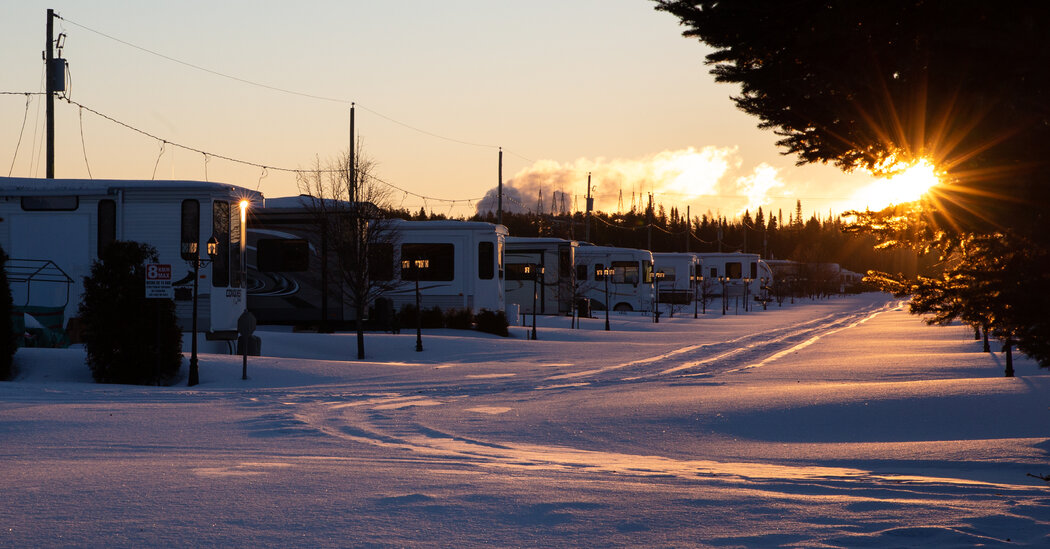 The pool area — complete with straw-covered umbrellas, a candy-colored inflatable children’s slide and a nearby tiki bar — evokes countless oceanside condos in Florida. Except for the snow, and temperatures that dipped this month to minus 15 degrees Fahrenheit.

This is Domaine de la Florida, a Canadian make-believe Miami, whose 520 residents are so in love with the Sunshine State that they have recreated it here. In the summer, golf carts whisk silver-haired retirees to games of beach volleyball, shuffleboard and Bingo. In the winter, as many as half of them fire up their R.V.’s or hop into their cars or a plane, and head south for the real deal.

Because the pandemic spoiled annual pilgrimages to their beloved tropical refuge, they were stuck in Canada, where they traded in their bathing suits for thermal underwear and have been trying to make the best of it.

“At least we had a white Christmas this year and can pretend we’re in Miami,” mused Gérard Ste-Croix, a 71 year-old resident, while cradling his shivering Yorkshire terrier, Mala. He and his wife have braved a Canadian winter for the first time in 11 years, after the coronavirus forced them to abandon plans to spend six months in their R.V. near Tampa, on Florida’s Gulf Coast.

Inside their Quebec home, a sign perched on a shelf said: “Paradise.”

Eager to maintain their Florida state of mind, the couple grill hamburgers on their patio, sheathed in plastic to keep out the cold. Other residents also favor a Miami-inspired aesthetic: pastel-colored garden gnomes in winter replaced by pink flamingoes when the snow melts.

Each year a giant flock of Quebec “snowbirds” migrate for the winter to Florida, where they join retirees from New York and other Americans drawn by Florida’s warmth and its senior-friendly ways. Think early-bird specials, surf and turf, adrenaline-charged Canasta tournaments, and slow-moving vehicles driven by people whose children wonder if they should still have licenses.

The Quebecers are so ubiquitous that they have their own Florida-based French-language newspaper, Le Soleil de la Floride, as well as a local ecosystem of Francophone real estate agents, accountants and dentists.

Even the unofficial Queen of Quebec, the singer Celine Dion, kept a 13-bedroom beachfront estate in Florida, with a private water park, before selling it in 2017 for a reported $28 million.

Before the pandemic, an estimated one million Canadian residents spent their winters in the United States; at least 500,000 of them were Quebec snowbirds who traveled to Florida, according to the Canadian Snowbird Association, a group that advises snowbirds on matters like insurance.

Such is the influence of Quebec culture in parts of the Sunshine State that in South Florida there are more than half a dozen restaurants offering poutine, the zipper-bursting Quebecois delicacy of French fries, cheese curds and gravy.

But this year, the closure of the land border with the United States and fears of catching the virus deterred many of Quebec’s snowbirds from the annual pilgrimage. Florida has had more than 1.96 million cases of Covid-19 compared with 922,848 in all of Canada.

And while it is still possible to take quick flights from Montreal to Miami — a more expensive option than driving — some residents of Domaine de la Florida said they were repelled by rules requiring them to quarantine for 14 days after flying home to Canada. That would include spending three days in a designated hotel at a cost of about $2,000 Canadian dollars, or about $1,600.

In the end, a majority of the community’s snowbirds opted to stay put.

Nicole Ruest, 66, who lives on Orlando Avenue with her husband Ghislain Gagné, 70, said it was the first time in seven years that the two had not gone to Florida. She passes the days doing puzzles, baking Quebecois dishes like Tourtière, or meat pies, and going for long walks. On more temperate days, she said, residents place plastic lounge chairs on the snowy pavement in front of their homes and exchange friendly gossip, much as they would poolside in Florida.

Ms. Ruest said heading south was just not an option this year since she feared she or her husband might get sick abroad.

“This place is not for everyone but we like the sense of community here,” she said.

The brainchild of 69-year-old André Bouchard, a snowbird himself, the community of near-identical prefabricated houses sits on a more than one-mile long stretch of land in Saint Ambroise, a municipality of about 4,000 people in Saguenay-Lac-Saint-Jean. The region is proud and picturesque, surrounded by mountains and famed for its aluminum and forest industries.

Mr. Bouchard, who owns an RV dealership across the street, said about half of the Domaine’s residents were snowbirds.

His faux Florida took root about a decade ago when he noticed how many Quebecers spent their winters in Miami. To reproduce Florida’s tropical sensibility, he said he “planted” dozens of plastic palm trees each year — imported from China. The largest cost about 5,000 Canadian dollars, or about $4,000, each.

Let’s say he is very serious when it comes to flora. Every September he takes off the trees’ removable leaves and covers the tree tops with black garbage bags to create the excitement of newly blossoming trees when he reattaches them in the spring.

“People were initially skeptical and said, ‘How can you recreate Florida in Quebec?’” Mr. Bouchard recalled. “But when I put palm trees and the street signs, sales took off.”

Mr. Ste.-Croix said the expense of flying to Florida and sending his car separately had cemented his decision to remain in Canada this year. BBQs aside, he is also adapting by going on cross-country ski expeditions.

He said his wife, who “hates the cold,” had found solace in embroidery. The couple was still paying $564 a month rent for the camping site in Florida where they had parked their mobile home.

Despite the challenges, some Canadians have traveled to Florida. Part of the appeal was the possibility of getting vaccinated against the coronavirus at a time when Canada’s vaccination rate has been lagging other countries, including that of the United States.

Perhaps predictably, there was a backlash against Canadian vaccine tourists on social media.

The state of Florida was initially vaccinating anyone age 65 or older, but has since tightened the rules to require those who qualify for vaccination to have proof of residency.

Joseph Roboz, 73, a Montrealer, is on the board of Century Village East, a condominium complex in Deerfield Beach where about half of the more than 8,000 condominiums are owned by Canadian snowbirds. Mr. Roboz, who has a lung ailment, said that after arriving in Florida in January, he had been vaccinated within 48 hours.

“This is my life we are talking about,” he said, explaining his rationale for traveling. He said vaccinating Canadian residents in Florida, big contributors to the local economy, was a public health imperative.

Real Vachon, 60, a resident of Domaine de la Florida, recently traveled to Fort Lauderdale to join his wife, Linda, and their French bulldog, Daisy. He said getting vaccinated had been a draw, along with the opportunity to pass the days lolling at their Florida home’s outdoor spa, surrounded by real palm trees, sans frostbite.

He and his wife are planning to depart Florida by the end of April for home. That should be just in time to see the plastic palm trees “bloom.”