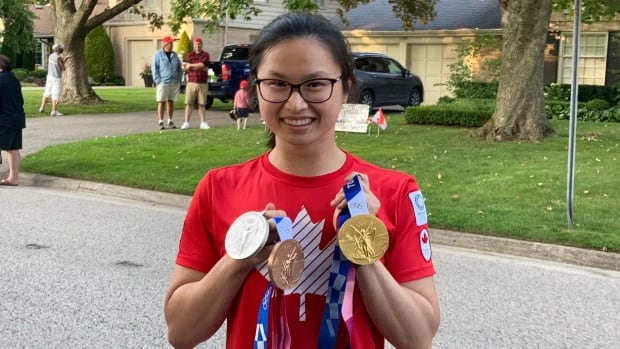 The London, Ont., native was named Best Female Athlete of Tokyo 2020 on Sunday by the Association of National Olympic Committees (ANOC) in Greece.

Mac Neil claimed Canada’s first gold medal at the Tokyo Games by capturing the women’s 100-metre butterfly in 55.59 seconds, lowering her own national record by nearly a quarter of a second.

“It is such a great honour to receive this award,” said Mac Neil in a press release. “There are so many amazing athletes who competed in the Tokyo 2020 Olympic Games. With all we have been through the last year and a half, this makes it even more special.”

“When Maggie won her gold medal on Day 3 of the Games, it blew the lid off of our team’s simmering pot,” said McBean.

“To perform at that level having spent a significant amount of time training in her backyard pool in London, Ontario, confirmed to the rest of the team that unique, less than ideal, training programs could result in world class results.

Her three-medal performance was a catalyst for Team Canada – in and out of the water – to believe in great things,” added McBean.

The gold, silver and bronze medal winner at Tokyo 2020 discusses her Olympic experience after the conclusion of the swimming competition. 4:20