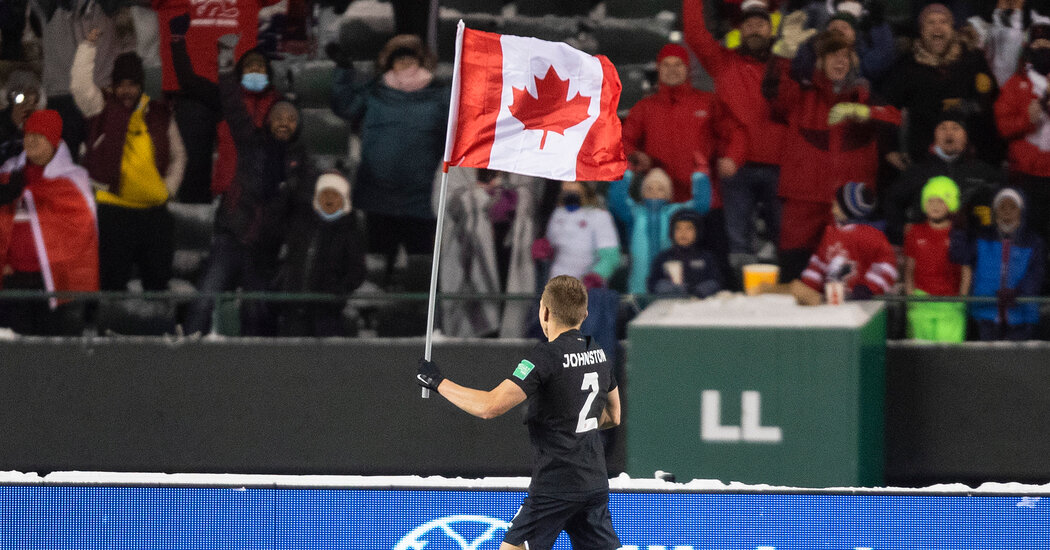 The men’s soccer match between Canada and Mexico at Commonwealth Stadium in Edmonton this week was peak Canada. At minus 9 Celsius with snow piled around the pitch, Canada won 2-1 and rose to the top of the regional qualifying standings for the World Cup.

While Canada has long been a powerhouse in women’s soccer, few predicted that Canada’s men would be in this position. I asked Rory Smith, The Times’s chief soccer correspondent, how the unexpected result has been received elsewhere and what’s next for the team.

Rory, by the way, has a soccer newsletter. He told me that its Canadian readers regularly email him looking for more coverage of Canadian soccer. If you want to join that cause while benefiting from reading his informed take on the beautiful game, sign up.

Our conversation was edited for length and clarity.

Would you give some context about where this performance by the Canadian team fits within the world of soccer?

Canada’s not been to a World Cup since 1986. From a European perspective, I don’t think we would necessarily have been expecting Canada to qualify, and we certainly wouldn’t expect Canada to be ahead of Mexico in particular.

But for a country that’s not been to the World Cup for so long to not just have a hope of qualifying but to be currently in pole position, that is quite impressive. Canada is, in some ways, the most surprising and possibly the most intriguing team.

Is this a matter of the Canadian team being good or other teams not being up to speed?

A bit of both, to be honest.

It looks to me like Mexico has kind of stalled a little bit. They lost to the States, they lost to Canada and they’re not picking up as many points as you would expect.

The U.S. has a team that might be quite good for 2026, but they look like they’re having kind of teething troubles.

There’s a gathering momentum around Canada, particularly because they’ve got not just one, but two outstanding players in Alphonso Davies and Jonathan David. Canada has definitely not produced players like that before and that’s a significant change.

So Davies and David are the real deal?

Davies, definitely. Davies will be one of the best players on the planet for 10 years from this point on. He’s a regular at Bayern Munich, which is one of the top five club teams in the world. He’s already won the Champions League.

David is a little bit further back in his development, but he’s played well in the Champions League and scored some clutch goals.

And around Davies and David there’s a supporting cast that is improving as well.

What’s the level of Canada’s coaching?

The coach John Herdman, he’s an English guy who came across from the women’s team.

I don’t know the answer to this question, but I do wonder how much lessons learned from the women’s game and the kind of practices instituted by being an elite nation in women’s soccer has broken through to the men’s side. I don’t know of any other examples of a coach going from an international women’s team to an international men’s team.

It strikes me that it must have some influence on his ability to cope with even qualifying for a tournament.

Was the cold and snow and Edmonton a factor in the win over Mexico?

It’s probably not that easy to play in the snow, right? But if you’re in Mexico, you’re playing at altitude. If you’re in Honduras or El Salvador or Costa Rica, there’s a good chance that it will be hot and humid. There’s lots of countries around the world where climate has an impact on the opposition and has an impact even on the style of the game that’s played.

There’s nothing wrong with maybe using that a little bit to your advantage. Bolivia plays all of its home games in La Paz. I’ve played football in La Paz. It’s basically impossible because you can’t breathe.

And teams will occasionally do their best to make sure that those hostile conditions apply whenever they can. Mexico could play in plenty of places that are at sea level, but they don’t.

What comes next when the qualifying play resumes for Canada at the end of January?

They have six games left in the qualification, so nothing’s certain yet. There is still not much margin for error because it’s quite tight at the top. So it will probably go down to the last couple of games.

Although Canada probably is better than Honduras and El Salvador, those aren’t easy places to go and play. The conditions are difficult, the crowd is hostile. Even the U.S. and Mexico struggle in those countries.

They should be aiming for automatic qualification, being in the top three, that is within their grasp. And I think they’d have to collapse pretty badly to finish any lower than fourth. They will get a do-over if they need one.

I wouldn’t expect them to win the World Cup if they qualify — I don’t think they ought to be getting carried away with themselves. But getting there is the main thing for Canada because it’s been so long. If you go to a World Cup and you have a well-organized team with two outstanding players, which looks like what Canada has, then you shouldn’t be thinking that it will be a humiliating experience.

A native of Windsor, Ontario, Ian Austen was educated in Toronto, lives in Ottawa and has reported about Canada for The New York Times for the past 16 years. Follow him on Twitter at @ianrausten.