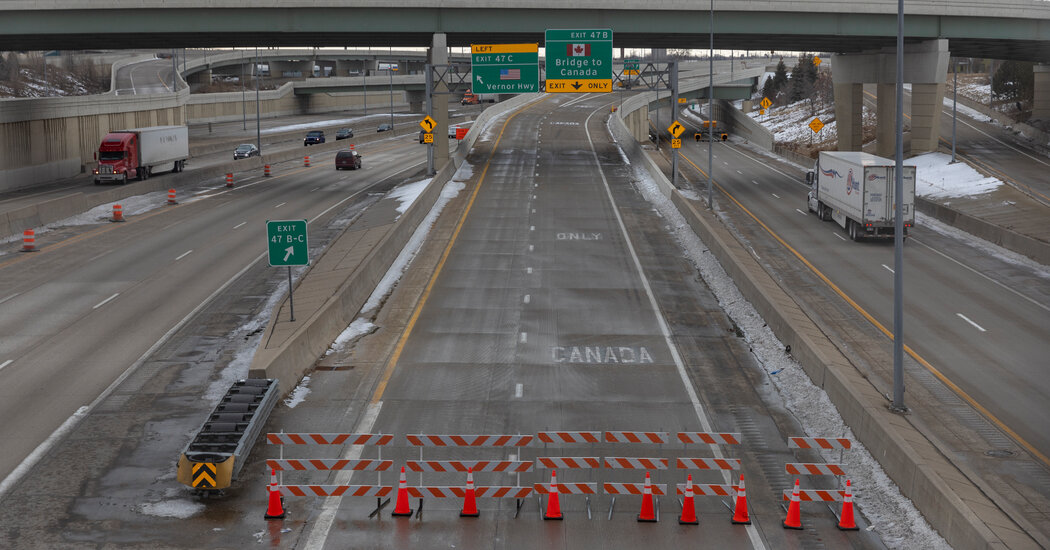 Blockades of the U.S.-Canada border stymied flows of critical supplies for the fourth day on Friday, leaving companies scrambling for materials and shutting down major auto factories from Ontario to Alabama.

The partial closure of the Ambassador Bridge, the busiest land crossing between the countries and a vital conduit for the auto industry, sent ripples through North American supply chains. Business groups called on officials to forcefully remove protesters who were causing the blockades. Some companies tried to redistribute key parts among their factories and looked for other ways to move products.

But others appeared resigned to shutdowns, saying that bypassing the Ambassador Bridge, which connects Detroit and Windsor, Ontario, was just too expensive or difficult.

Toyota said that the disruptions had led to “periodic downtime” at its engine plants in West Virginia and Alabama, as well as factories in Canada and Kentucky, and that interruptions were likely to continue through the weekend. Ford Motor curtailed capacity at two plants in Windsor and Oakville, which is also in Ontario, and shut down its Ohio assembly plant.

Other automakers said their assembly lines were running but not at optimal levels.

General Motors’ production was “running at relatively normal levels,” the company said Friday. Stellantis, which owns Jeep, Ram and other brands, said that all its North America plants had started Friday morning, but that the situation remained “incredibly fluid.”

The disruptions threatened to linger as truck drivers and members of far-right groups protested vaccine mandates and other pandemic restrictions in Canada and called for the resignation of Prime Minister Justin Trudeau.

Both the Canadian and American governments were trying to help companies get auto parts, fresh fruit and vegetables, and other products through the border. Manufacturers and logistics companies were sometimes routing trucks hundreds of miles out of their way to bridges and border checkpoints that were still open.

Alternatives to the Ambassador Bridge are limited, said Kelly Stefanich, a Toyota spokeswoman. Sending shipments through Buffalo and Mackinaw, Mich., for example, required more drivers and trucks, which were already in short supply.

“We are seeing trucks starting to flow slowly now, which is a good sign,” Ms. Stefanich said Friday.

The protests followed two years of pandemic-related closures of ports and factories and a surge in demand for cars and other goods among consumers who cut spending on restaurant meals, travel and other services.

“Every hour this persists the costs rack up,” said Brian Kingston, president of the Canadian Vehicle Manufacturers’ Association, whose members include Ford, G.M. and Stellantis. “They need to enforce the law and remove the protesters from the road leading to the bridge.”

Production shutdowns will worsen a shortage of new vehicles, which has already driven up prices, IHS Markit, a research firm, warned Friday.

Some businesses that need to ship goods across the border were paying extra to reroute the freight through Buffalo, where the crossing remained open — at least for now, said Jennifer Frigger-Latham, the vice president of sales and marketing at EMO Trans, a logistics company.

“In the current market, people are so used to delays and frustrations because of Covid, they’re much quicker to react these days and throw money at the problem,” she said.

Canadian officials were allowing some companies to send goods through other ports of entry without having to refile documents. U.S. customs officials were assisting that effort by adding personnel and screening lines at those alternate crossings.

She said one crossing in Coutts, Alberta, had not been consistently open over the last week. Protesters may try to block another between Saskatchewan and North Dakota. And the Peace Bridge connecting Fort Erie, Ontario, and Buffalo could be shut down this weekend. On Thursday, protesters clogged the Ottawa airport.

“It seems like every time you find an alternative path, it gets blocked, either by a farm vehicle or a truck,” Ms. Dynes said.

Domestic spot prices for shipping had tripled in some cases, causing many companies to suspend shipments, she added.

Those difficulties have been compounded by a shortage of truck drivers. Some business groups had spoken out against the vaccine requirements for truckers in Canada and the United States, saying they would worsen logistical problems.

Many trucks are trying to use a bridge that connects Port Huron, Mich., with the Canadian city of Sarnia, north of Detroit. But traffic is so heavy that trucks often have to wait hours to cross, Mr. Kingston said, adding that he had heard of waits of up to eight hours.

Some carmakers have moved parts by airfreight or even helicopter. But “air cargo is not as efficient for large and bulky components,” Mr. Kingston said.

He noted that the Ambassador Bridge was designed to accommodate large numbers of heavy trucks. Some hazardous materials or other specialized loads cannot cross any other way.

Carmakers and suppliers are also breaking up shipments and putting them in smaller trucks and vans, which can pass through a tunnel that remains open between Detroit and Windsor. Officials on both sides of the border have added staff to handle increased commercial traffic, said Neal Belitsky, president of the company that operates the tunnel.

But such measures are expensive stopgaps, and many companies are simply slowing down production until the blockade ends. “The hope is that this will be over shortly,” said Dan Hearsch, a managing director at AlixPartners, a consulting firm that has been helping auto companies cope with the turmoil.

The situation remained unpredictable, with authorities warning of copycat protests that could paralyze traffic in other locations. Ron Greene, the vice president of business development at Overhaul, which monitors high-value freight like electronics and pharmaceuticals, said the company was advising truck drivers to plan alternate routes, keep fuel tanks at least three-quarters full and stay in close touch with dispatchers.

“We don’t know what to expect, if there’s going to be additional protests in the U.S. or Canada,” he said. “Truck drivers have to be aware they may need to make alternate plans as these things unfold.”