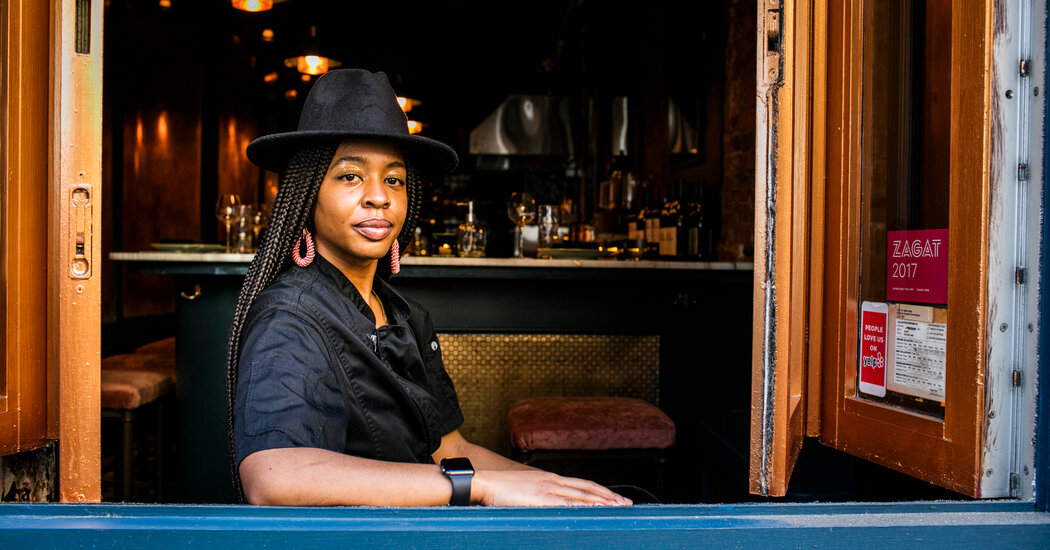 At this new spot in the East Village, the chef, Shenarri Freeman, is interpreting the Virginia Southern and soul food of her youth through a contemporary plant-based lens. It’s another of Ravi DeRossi’s many places (11 and counting) in the neighborhood, under his Overthrow Hospitality umbrella. Here, a compact dining room with a chef’s counter and seating outdoors are the backdrop for Ms. Freeman’s smoked grits with torched oyster mushrooms, a black-eyed pea and garlic pancake, maple buttermilk cornbread, stuffed collards with Aleppo rice, roasted purple yams with blackberry coulis and toasted marshmallows, and a seasonal fruit cobbler. Plant-based stand-ins are used in place of real dairy, as in the ice cream for the cobbler and the rosemary butter on the grits. Ms. Freeman is also serving her version of Southern-fried lasagna, a dish from her childhood. She worked in Washington, D.C., then at Mr. DeRossi’s Avant Garden, while completing her program at the Institute of Culinary Education. She has been vegan since 2017, and said her food expressed the “benefits of a plant-based approach while respecting beloved traditions.” The wine list, by Drew Brady, the wine director for the restaurant group, focuses on Black-owned wineries in South Africa, like Aslina, Bosman and Kumusha, and from California, including Longevity and Intercept. (Opens Wednesday)

The popular dining destination on the eastern section of the Lake in Central Park is back in business after the pandemic closed it for a year. It has opened for lunch weekdays from 11:30 a.m. to 4 p.m., and brunch on weekends starting at 9:30 a.m. Dean Poll, who runs it, says he has rehired the staff and expects to open for dinner in early May. At this point, the terrace is set with tables, but the interior is not open yet. The fast-food counter operates only from a window for grab-and-go items. He also says the establishment has restrooms that are open to the public.

The meats in question here are varied: beef, pork, duck and chicken, none imported from Japan and most cooked sous-vide before the final preparation. Breaded and fried cutlets, served on a plate, over rice, in sandwiches and in bao buns, are the specialty. Akio Nadamoto, who has eight barbecue restaurants in Japan and one in Cambodia, owns the restaurant, named after a mountain near Kobe, Japan, where Mr. Nadamoto has most of his establishments. The subdued dining room has lots of wood, a counter and booths to seat 30, socially distant, for now. There are eight seats outside.

The chef David Santos, who was running a supper club, Um Segredo, before the pandemic hit, has now pivoted to offer fried chicken dinners every three to four weeks. Ample for two, the spread includes 10 pieces of chicken, mac and cheese, potato salad, coleslaw and banana pudding, $55; fried fish can replace the chicken. The meal must be pre-ordered, for pickup at scheduled times, from Flex Mussels, 154 West 13th Street. (Saturday)