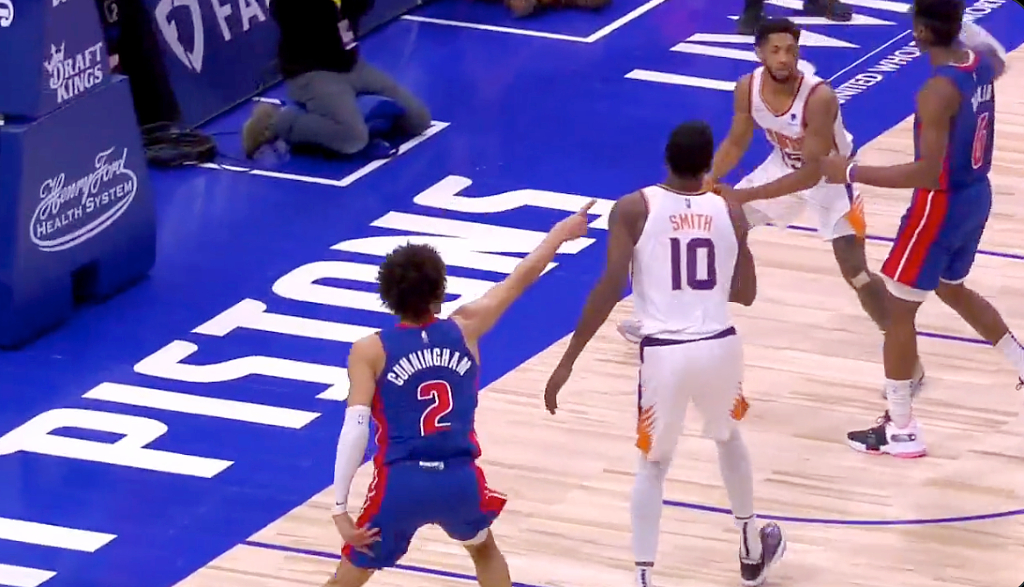 The Detroit Pistons are having a rather dreadful year, as they have been without their best player for much of the season as Jerami Grant deals with a torn thumb ligament, and have only managed 10 wins at the midway point of the season.

The No. 1 overall pick from last year Cade Cunningham has struggled with efficiency, as rookies often do when they have to be the lead creators for an offense, but is averaging 15.5 points, 5.8 rebounds, and 5.3 assists per game, providing some bright spots for the faithful in Detroit. For Cunningham, the losing has been frustrating and on Sunday against the Suns, it seemed he was trying to get himself and his team fired up and earned an early exit for it in questionable fashion.

After picking up a first h alf technical, Cunningham was able to get the baseline and unload a little frustration on the rim with a thunderous dunk on a late contest from Jalen Smith, who Cunningham pointed at to let everyone know who he got. That led to his second technical, which Cunningham obviously disagreed with as did most watching, as to give that as a second technical felt pretty soft.

It’s not a shocking technical, as the league has long tried to penalize players for directly taunting other players with points and gestures — Dikembe Mutombo’s finger wag being the most famous example as it had to start being done to the crowd rather than in a player’s face. Still, it’s a tough way to get tossed and in a game the Pistons were already losing considerably, there’s now not a lot for fans to even look to enjoy on the floor with Cunningham taking an early shower.