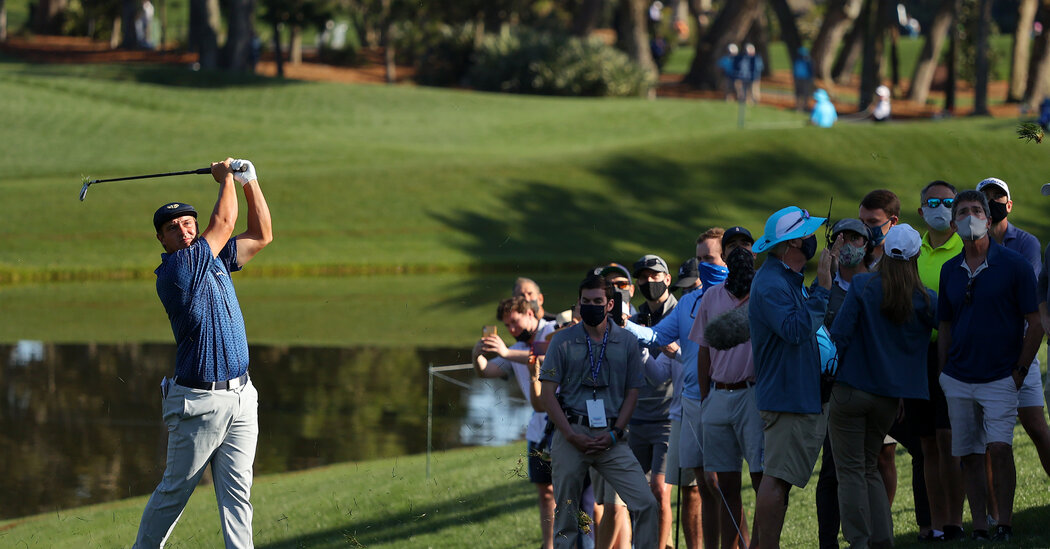 PONTE VEDRA BEACH, Fla. — Throughout the second round of the Players Championship on Friday, an entertaining crew of the world’s best golfers vied for the tournament lead. But for several hours, most fans were transfixed by a different matter: Whether Bryson DeChambeau would hit a prudent iron or take a mighty lash with his driver on hole after hole.

In this recurring drama, it seemed as if most of the roughly 10,000 spectators permitted on the spacious grounds of the T.P.C. Sawgrass golf course were packed behind DeChambeau as he stood on a tee box and deliberated how to best attack a par-4 or par-5. The tension was palpable, and the fans hushed when DeChambeau moved toward his golf bag.

As DeChambeau explained later, if he ultimately pulled an iron from the bag, the response was a crestfallen bellowing, as if the crowd had seen a child’s just-bought ice cream cone fall and splatter on the ground.

“It’s always like a big ‘Awwww’ for an iron,” DeChambeau said after his round on Friday.

And if he tugged his mammoth driver from the bag? Think climatic movie scene in which a hero finally vanquishes the villain.

“If it’s the driver, it’s like, ‘Yeah!’ ” DeChambeau said with a hearty grin.

It has come to this on the PGA Tour, and perhaps it is not a surprise. Winning golf is entertainment, but it’s no match for a dose of swashbuckling charisma mixed with the sight of a golf ball smashed as far as 380 yards.

The DeChambeau era in men’s professional golf continues with resounding impact. After Friday’s round, Rory McIlroy, a four-time major championship winner who missed the cut, blamed trying to play too much like DeChambeau for his poor performance.

While hitting towering drives, DeChambeau, the reigning United States Open champion, also shot a three-under-par 69 on Friday that put him at six under for the tournament and only three strokes behind the second-round leader, Lee Westwood. Play was suspended Friday evening because of darkness, with a small number of players unable to finish their second rounds.

DeChambeau, who defeated Westwood in a final-round duel last weekend to win the Arnold Palmer Invitational, is clearly buoyed by the fans’ attention. Their energy seems to inspire him, though he might not hit the driver as often as they would like on the tight T.P.C. Sawgrass layout. Between shots, he freely, and warmly, banters with the crowd.

“They always ask how many protein shakes I’ve had, which is funny,” he said, “and I always reply back with however many I’ve had that day, for the most part.”

Protein shakes are a staple of the diet that helped DeChambeau gain 40 pounds last year, although he has slimmed down by at least 15 now. As an explanation, DeChambeau said he had consumed only four shakes by Friday afternoon, or about half his intake four months ago.

While DeChambeau hit several exceptional drives and approach shots on Friday, finishing with five birdies and a double-bogey, he was disappointed by his ball striking and headed to the practice range shortly after his round. He was still there pounding balls three hours later.

Asked if he ever comes off the golf course satisfied and skips the post-round practice, DeChambeau, 27, blurted: “Never. Because my brain is — I mean, I’m a perfectionist, and I’ll continue to be so until the day I die and until the day I stop playing this game. That’s just the way I am. I love it about me.”

He smiled and added, “But at the same time it makes me worry about stuff a lot.”

Though DeChambeau once again cast a large shadow on a PGA Tour event, he was far from the only golfer making news.

Viktor Hovland, the ascending 23-year-old who is ranked 13th in the world, missed the cut on Friday in part because his mother, who was watching the tournament at home in Norway, noticed a rules violation that he had committed in the first round and called it to his attention later. Her intervention led to a two-stroke penalty.

Hovland finished Friday at two over for the tournament, or two strokes above the cut line. He received the penalty for inadvertently playing his ball from the wrong place on the 15th green in the first round on Thursday.

As is custom, Hovland had moved his ball out of a competitor’s putting line. But then he failed to replace it in the proper spot, although he did not move it closer to the hole or gain any apparent advantage.

According to the NBC broadcast of the Players Championship on Friday, Hovland received a call from his mother after the first round and then contacted PGA Tour officials, who reviewed video of the incident and verified Hovland’s mistake.

“It’s unfortunate; I’ve already kind of put that past me,” Hovland said calmly after shooting 74 on Friday. “I’m just more disappointed that I wasn’t able to play better.”

Hovland was not nearly as disconsolate as McIlroy, who shot 75 on Friday after a glaring 79 on Thursday. Like so many others at this year’s Players Championship, McIlroy had DeChambeau on his mind, and he believes trying to keep up with DeChambeau’s prodigious distance has led to his recent subpar play.

Late last year, after DeChambeau’s U.S. Open victory, McIlroy, already one of the longest hitters on the tour, altered his swing in an attempt to add even more yardage to his drives.

“I’d be lying if I said it wasn’t anything to do with what Bryson did at the U.S. Open,” McIlroy said. “I think a lot of people saw that and were like, ‘Whoa, if this is the way they’re going to set golf courses up in the future, it helps.’”

McIlroy now considers that a mistake.

“I thought being able to get some more speed is a good thing,” he said. “And maybe — to the detriment a little bit of my swing — I got there. But I just need to maybe rein it back in a little bit.”