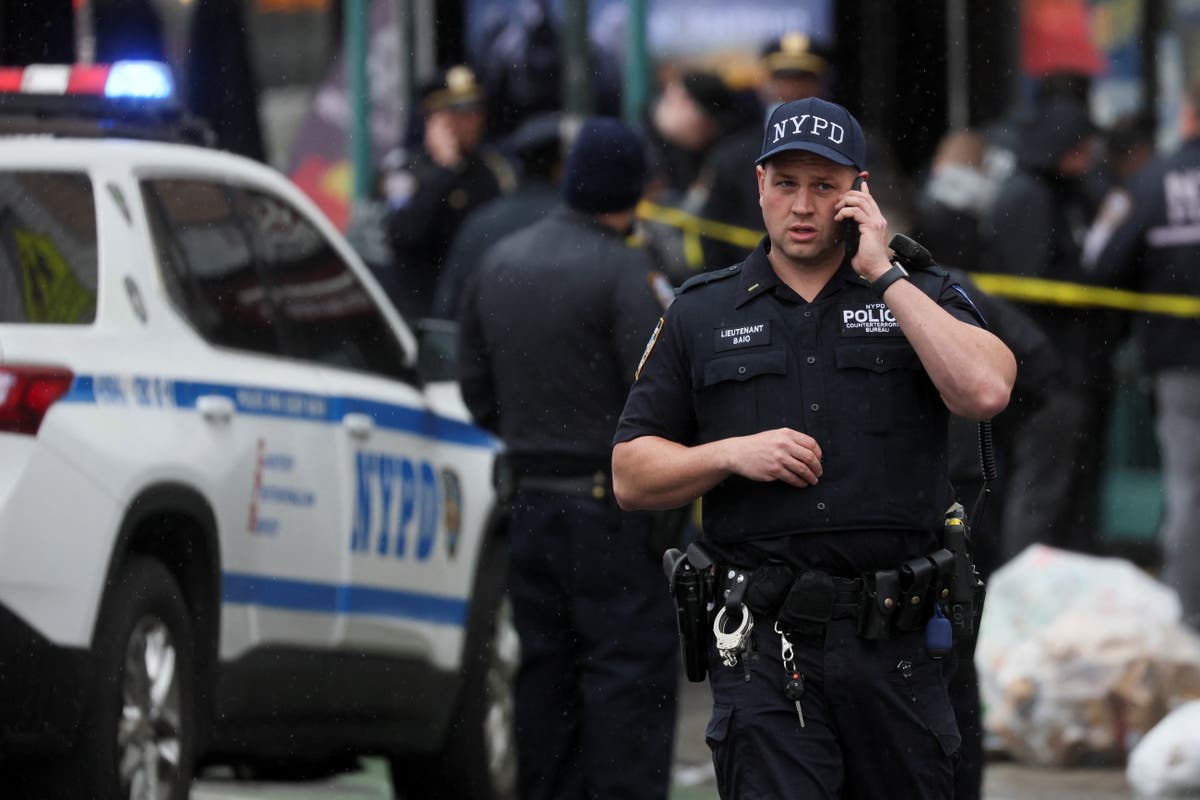 At least 13 people have been shot or wounded by shrapnel after a gunman opened fire and detonated several devices on the Brooklyn subway Tuesday morning, sparking panic among morning commuters.

Police are hunting for a suspect who was described as wearing a gas mask and an orange construction vest, ABC7 News reported.

Authorities were called to reports of gunfire and multiple explosions on the Manhattan-bound N train at it neared 36th St station at around 8:30am.

Sources said a masked man may have thrown a smoke canister into the air before he began shooting, hitting at least five commuters.

NBC New York reported that two of the five shooting victims were seriously wounded. At least 13 people were taken to hospital, but it’s not clear whether they were shot.

A video posted to Twitter showed terrified commuters getting off a subway car as it pulls into the 25th St station with smoke billowing from the carriage. Several appear overcome with smoke inhalation.

Juliana Fonda, a broadcast engineer at WNYC, told the Gothamist she heard shots fired from one car over while riding the N train.

“People were pounding and looking behind them, running, trying to get on to the train,” Ms Fonda said.

ADVISORY: Due to an investigation, avoid the area of 36th Street and 4th Avenue area in Brooklyn. Expect emergency vehicles and delays in the surrounding area. pic.twitter.com/xPIAHbtSA7

“The door locked between cars and the people behind us, there were a lot of loud pops and there was smoke in the other car.”

Another commuter told the news site that 36th St station was filled with smoke as subway riders tried to evacuate.

“There was blood everywhere,” the commuter, who gave her first name Joana, said.

“Everybody’s just running out because they thought they were next.”

Witness Roddy Broke wrote on Twitter: “Either shots or a bomb went off at 36th Street. Scariest moment of my life, man.”

Wounded people were seen emerging from the 36th St and 25th St stations.

Authorities initially warned of unexploded devices at the stations.

Just before 10am, the NYPD said there were “no active explosive devices”. It warned New Yorkers to avoid the area.

There is no D/N/R service in Brooklyn and some stations in Manhattan.

What’s Happening?
There is a major disruption to service while NYPD responds to an incident at 36 St.

The D, N and R lines have been suspended, and there will be severe delays on the B, D and F lines, the MTA said.

President Joe Biden has been briefed on the attack and was in contact with Mayor Eric Adams and NYPD commissioner Keechant Sewell, White House press secretary Jen Psaki said.

Fabien Levy, a spokesman for Mr Adams, asked for New Yorkers to stay away from this area for their safety.