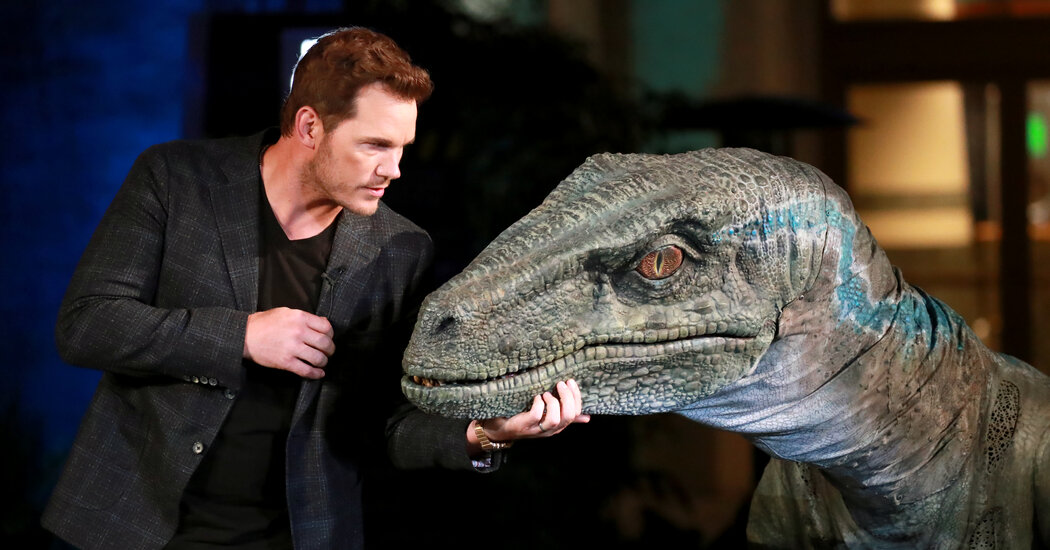 This summer Chris Pratt, Tom Holland and Bryce Dallas Howard are all starring in new productions, financed by major studios and enjoyed by countless viewers. But these projects didn’t debut on movie screens; they’re not streaming worldwide either. Instead, these stars are making a splash on the screens you watch while waiting in the line for new theme park attractions.

In the queue for the new VelociCoaster ride at Universal’s Islands of Adventure in Orlando, Howard and Pratt, playing their characters from the “Jurassic World” franchise, bring you up to speed on what you’re about to experience (a run with the raptors), while easing back into the spirited back-and-forth fans of the franchise know and love. (The actor BD Wong, from the first “Jurassic Park” film, is featured as well. He, Pratt and Howard also appear in Jurassic World: The Ride at Universal Studios Hollywood and the coming “Jurassic World: Dominion,” set for a summer 2022 theatrical release.) On WEB Slingers: A Spider-Man Adventure at Disney California Adventure in Anaheim, Holland appears as Peter Parker, welcoming guests to the Avengers Campus open-house, warning them of the dangers of self-replicating “spider-bots,” and instructing them on how to utilize the ride’s distinctive, gesture-based mechanics.

This current generation of queue videos extended from a trend that exploded in the 1990s, when a combination of technology and celebrity culture brought an entire theme park subgenre to life.

Before that, rudimentary film technology, alongside simplistic ride mechanics and a more pared down emphasis on story, meant that the attractions guests regularly enjoyed didn’t need any further explanation. When getting on Space Mountain, everything was unspoken but explicitly clear — the swooping design of the ride’s exterior, with its conical shape and spires that reach heavenward; the rocket-shaped ride vehicles — all signified that you would be zipping around the galaxy.

But soon the simplicity that had previously governed theme park attractions began to change — the rides were becoming more complex, requiring additional safety instructions, while attractions also became more focused on storytelling. And, quite frankly, lines were getting longer. Queue videos were an entertaining shortcut that serviced all of these needs.

In the late 1980s, with Disney attractions like Star Tours, videos in the queue became commonplace. But in 1989, with the opening of Disney-MGM Studios (now Disney’s Hollywood Studios) at Walt Disney World, the queue video entered the celebrity realm. This new park aimed to take you behind the scenes of your favorite movies and TV shows, and starry video segments were there to greet you in the line to the journey.

David Letterman appeared in the lead-up to The Monster Sound Show, where guests could record sound effects for a short film. And at the Magic of Disney Animation experience, you were treated to a video where Walter Cronkite and Robin Williams described the process. But these celebrities were usually playing themselves rather than well-known movie characters.

That shifted in 1991, when Back to the Future: The Ride opened at Universal Studios Orlando. In the queue video, both Christopher Lloyd and Thomas F. Wilson appeared as their characters Doc Brown and Biff Tannen from the “Back to the Future” franchise.

Peyton Reed, the director of “Ant-Man,” co-wrote the queue video material for Back to the Future: The Ride with Mark Cowen — and they conceived of a narrative that went beyond the film series plots. “If you watch it, you just see the DeLorean and you never see who is driving the DeLorean,” Reed said of the queue video. “At the time there was a concept that it was Doc Brown’s evil twin brother who stole the DeLorean.” Reed and Cowen proposed that idea along with bringing in the film series’ chief antagonist Biff. It stuck. And the queue became a dynamic way to continue the story of the movies. When The Simpsons Ride replaced Back to the Future: The Ride, Lloyd even returned to voice Doc Brown in the queue video for that attraction.

Universal has continued to emphasize star power in their queues — everything from Transformers: The Ride 3D to the various Harry Potter attractions feature actors reprising their roles.

Universal believes that these clips enhance the experience of the park overall. “We’ve built our business on bringing blockbuster movies to life,” Thierry Coup, the senior vice president and chief creative officer for Universal Creative at Universal Parks & Resort, said via email. “Involving the actors in rides brings an incredible level of authenticity to the experience; and when we can bring both the actors and filmmakers into the process, we can take things to a whole new level.”

While Universal helped popularize the movie-accurate queue video, Disney has been making strides. In 2017 Guardians of the Galaxy — Mission: Breakout! opened at Disney California Adventure, with the queue video featuring cast members from the “Guardians” movies. Rise of the Resistance, the centerpiece attraction for the Star Wars-themed land Galaxy’s Edge at Disneyland, has preshow appearances by John Boyega, Daisy Ridley, Domhnall Gleeson and Oscar Isaac.

Amy Jupiter is a former Disney Imagineer who worked on Guardians of the Galaxy and WEB Slingers. “I love queues, I really do,” Jupiter said in an interview. According to her, the queue is meant to answer questions: “Who are you as an audience member? Where are you? And what is your role? What are you here to do?”

In the case of Guardians of the Galaxy — Mission: Breakout, you’re in the Collector’s fortress, and you’re going to break out the wisecracking heroes. James Gunn, who directed the films, also helmed the queue and ride videos. “James was always a good partner and immediately grasping what we were after,” Jupiter said. The Mission: Breakout team flew to Atlanta, where “Guardians of the Galaxy, Vol. 2” was shooting, and spent days capturing the footage for the queue and attraction. Jupiter said that Gunn helped immensely. “It’s a collaborative effort when you do these, and he brings the knowledge of the characters and the intimate performances that we don’t get,” she said. “Our strokes are super-broad.”

Gunn recently tweeted that filming for Guardians of the Galaxy: Cosmic Rewind, a roller coaster coming to Epcot, is “on the agenda.” Meaning the age of the queue video starring big name actors as their famous characters is far from over — the next generation of queue videos could be even more immersive, making the translation from movies even more seamless.