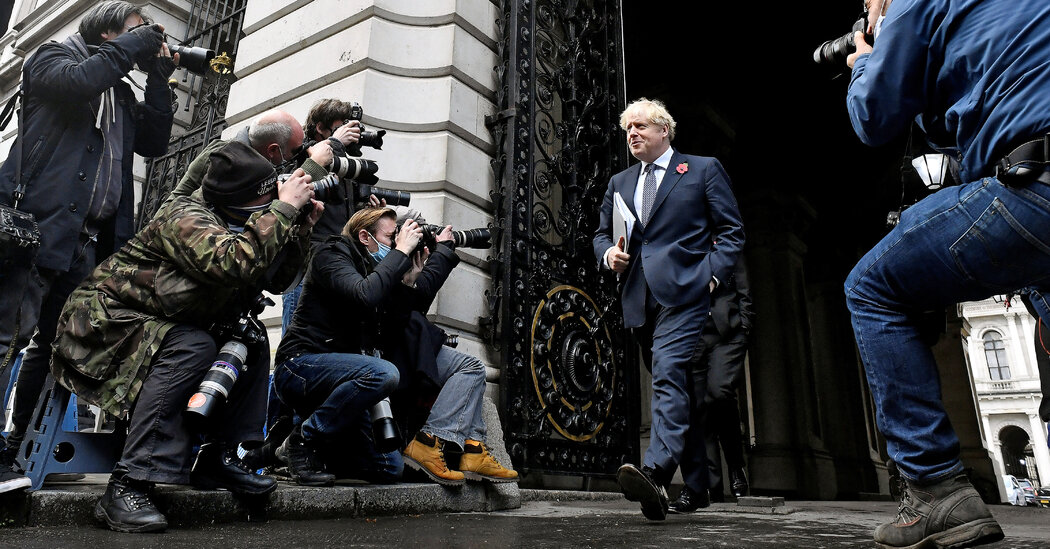 LONDON — An abrasive, plain-speaking former tabloid reporter, Lee Cain was part of a tight-knit team of Brexit campaigners who tied their fortunes to Boris Johnson and were rewarded with plum jobs in Downing Street when he became prime minister last year.

On Wednesday, though, Mr. Cain’s luck ran out after he lost a power struggle, quit as communications chief and left behind him a much broader question: As the Brexit trade negotiations enter the final stages, is Mr. Johnson turning against the hard-line Brexit faction that helped him to power?

Speculation is now rife about the future of Mr. Johnson’s most influential and divisive aide, Dominic Cummings, the chief architect of the Leave forces’ Brexit referendum campaign and Mr. Cain’s political patron.

The BBC reported that Mr. Cummings was expected to leave his position by the end of the year, and Transport Secretary Grant Shapps told Sky News on Friday morning that he “will be missed.”

The palace intrigue comes as Britain’s leader confronts suddenly shifting political forces, with the election of a new, anti-Brexit American president and mounting pressure to reach a post-Brexit trade deal with the European Union.

Striking a deal would avert the risk of raised tensions with the United States over the Irish border, as President-elect Joseph R. Biden Jr. has already made clear his determination to preserve the fragile peace process in Northern Ireland.

Critics, some within Mr. Johnson’s own Conservative Party, have railed at the dominance of the Downing Street clique led by Mr. Cummings, which excelled at campaigning and purging political opponents during Brexit but has struggled with the more prosaic business of governing, especially in the crucible of the coronavirus pandemic.

“They have been weakened,” said Anand Menon, professor of European politics and foreign affairs at King’s College London, of the Vote Leave contingent, adding that they are out of sync with the shifting political tides. “They do seem a bit 2016,” he added.

Recently, Conservative lawmakers have vented openly at being excluded from decision making on pandemic policies, especially around lockdowns. On Thursday, Charles Walker, the vice chairman of the influential 1922 Committee of backbenchers, told the BBC that there had been “unhappiness about the Number 10 operation for some time.”

The catalyst for Mr. Cain’s demise was factional fighting over plans to recruit a spokesperson to front new White House-style televised news briefings.

Though Mr. Cain liked the idea, he was less keen on Mr. Johnson’s decision to appoint a former journalist and broadcaster, Allegra Stratton. Ms. Stratton, who once worked at the left-leaning Guardian, was never likely to stir culture wars or adopt the abrasive, polemical tone favored by Brexit hard-liners.

When rumors surfaced that Mr. Johnson would keep both by promoting Mr. Cain to the powerful post of chief of staff, the backlash was swift. Critics recalled his past as a journalist for The Daily Mirror during which Mr. Cain famously dressed in a chicken suit to mock the former Conservative leader, David Cameron, during the 2010 campaign.

Among those said to oppose the plan to promote Mr. Cain, according to the BBC, was Carrie Symonds, Mr. Johnson’s fiancée.

The feud ended late Wednesday, when Mr. Cain issued a statement saying that he was honored “to be asked to serve as the Prime Minister’s Chief of Staff” but had decided after careful consideration to resign from the government.

Mr. Cain’s departure gives Mr. Johnson the chance to shuffle his team — a shake-up that some analysts say is overdue, given that he faces the combined economic pressures of the pandemic and Brexit, which they predict will cause disruption even if Britain strikes a trade deal.

“There are going to be huge strains on this government in January,” said Vernon Bogdanor, a professor of government at King’s College London. “Unemployment is likely to increase and there will be pressures toward more state intervention, redistribution of income, and reducing inequalities.”

Such a social democratic approach would test Conservative backbenchers, because it could require the government to do things that Tories normally abhor, like raise taxes. But Mr. Johnson is ideologically flexible, and as Mr. Bogdanor pointed out, the Conservatives are “not an ideological party, they are a practical party.”

More immediately, the apparent weakening of the hard-line Brexiteer faction in the government could indicate that Mr. Johnson may have decided he cannot risk a no-deal Brexit, given all the other pressures, and is prepared to make compromises to get a deal with the European Union.

Among those new pressures is the presence of Mr. Biden, who opposed the “Vote Leave” agenda and will look critically on a Britain that drives a further wedge between itself and the European Union. Mr. Biden has already warned Mr. Johnson not to negotiate with Brussels in a way that jeopardizes peace in Northern Ireland.

Mr. Johnson had been following a line of aggressive tactics that outwardly bore the hallmarks of the “Vote Leave” contingent. He introduced legislation that would renege on the government’s promises for a post-Brexit Northern Ireland and possibly lead to the reimposition of a hard border in Ireland.

But many analysts have dismissed that as posturing for leverage that, in any case, he no longer has because of Mr. Biden.

Threatening to resurrect a border in Ireland “was a strategy to leverage the E.U,” said Mujtaba Rahman, an analyst at the political risk consultancy Eurasia Group, “In a world where Trump won, that strategy would probably have been validated, perhaps even reinforced. But of course, with Biden, it’s not going to stand.”

Not only will Mr. Biden defend Ireland’s interests, Mr. Rahman said, but he would also view a rift between Britain and the European Union as an obstacle to Britain being an effective partner with the United States on global issues, like standing up to Russia and China or combating climate change.

The fate of Mr. Cummings will be an important clue to the direction of Mr. Johnson’s government. Earlier this year, he kept his job despite a rogue trip in apparent breach of coronavirus rules, an episode that illustrated his importance as a lodestar to a prime minister who wears his political ideology lightly.

Mr. Menon, however, said he would not be surprised to see Mr. Cummings follow Mr. Cain out of Downing Street soon.

“He’s part of a tribe and if he sees his tribe weakened, yes, it’s possible,” he said. “But it’s equally possible that Cummings has realized that running a government isn’t as easy or as much fun as he thought. It requires patience, diligence and collaboration with other people.”