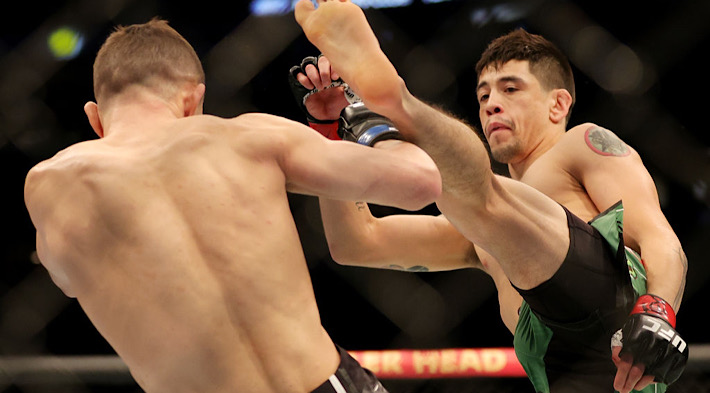 The saga that’s been Brandon Moreno (20-6-2) and Deiveson Figueiredo playing hot potato with the UFC flyweight belt took a slight detour on Saturday night at UFC 277, when Kai Kara-France (24-10) entered the frame to fight for the interim crown. Moreno continued his pursuit of winning back the belt with a third-round TKO of Kara-France in the co-main event from American Airlines Center in Dallas.

Moreno looked like a fighter who has been here before, with the championship pedigree to know exactly how to pace himself through a potential five-round fight. Kara-France was methodical in his own right, looking for opportunities to toss his heavy right hand and finding gaps in Moreno’s showmanship to attack his chin.

After a relatively even first round, Moreno was precise, jabbing Kara-France when he jumped inside and taking advantage of the rare misstep to clinch Kara-France against the cage midway through the second. Kara-France began to chip away with leg kicks, mixing it up from his barrage on Moreno’s face as his lead leg began to show some color.

In the third, Kara-France earned his first takedown of the night, but Moreno escaped back to his feet only to be met with another slew of heavy-handed shots. Moreno caught Kara-France with a heavy kick to the midsection before finishing him on the ground, earning a ref stoppage.

Moreno entered Saturday night’s bout having lost a decision bout and the belt to the current champion in his last outing. Before that, Moreno submitted Figueiredo to claim the belt. Moreno’s last fight against Kara-France came in 2018, when the former champion earned a decision victory.

Kara-France won his last three bouts to earn a title shot, with a decision over Askar Askarov and a gnarly first-round knockout of Cody Garbrandt.