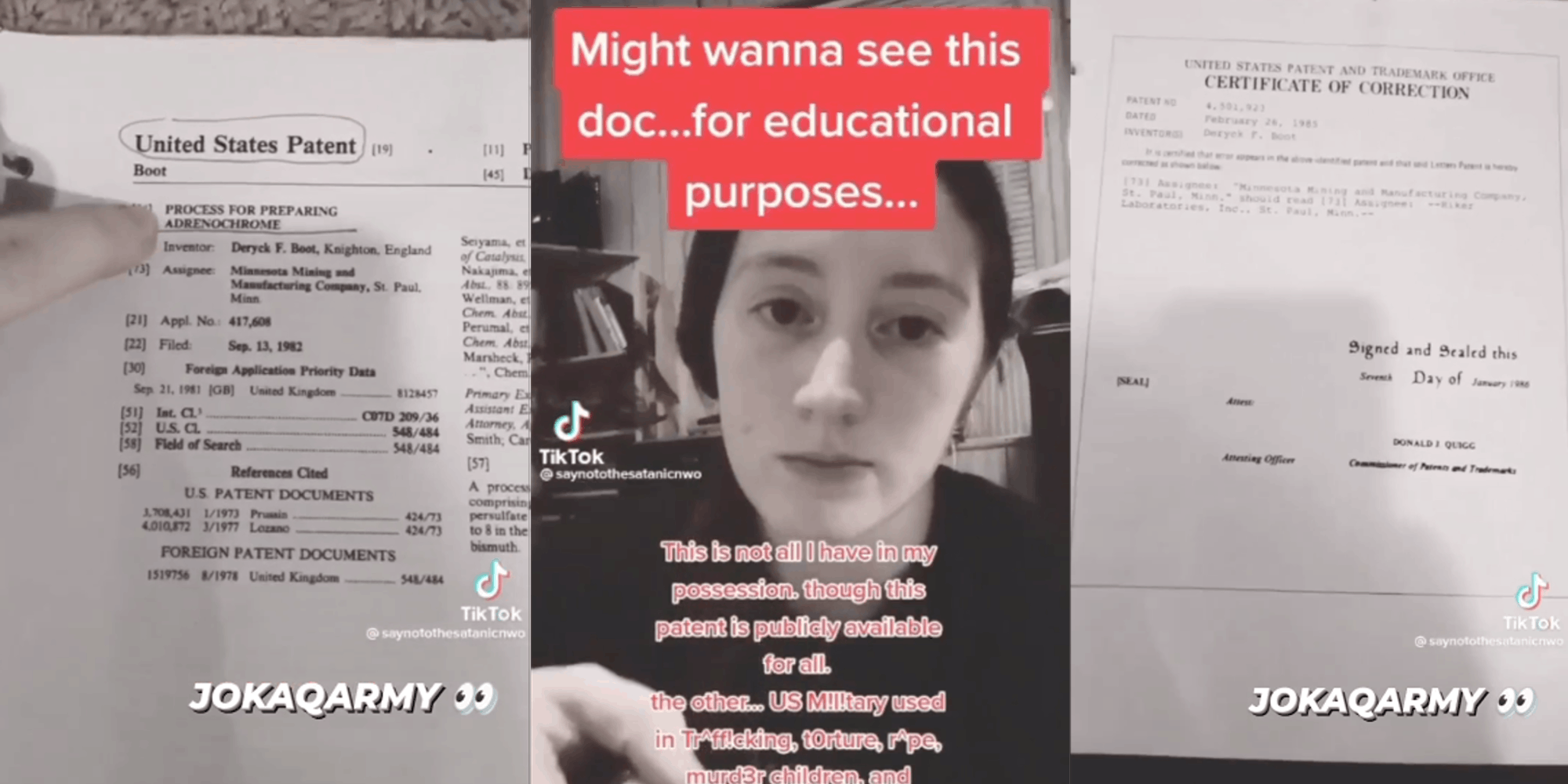 One Dumb Conspiracy is a weekly column that debunks the mostly wild conspiracy theories swirling around the web and runs on Mondays in the Daily Dot’s web_crawlr newsletter. If you want to get this column a day before we publish it, subscribe to web_crawlr, where you’ll get the daily scoop of internet culture delivered straight to your inbox.

Supporters of the QAnon conspiracy theory believe they’ve finally found undeniable proof that the so-called global elite are harvesting a secret drug from babies. Yet as it turns out, the claims are entirely nonsense.

In a video first posted to TikTok, a user points viewers to a patent for processing and preparing Adrenochrome: a compound developed by oxidizing the hormone adrenaline.

Adrenochrome, according to QAnon lore, is a psychedelic drug used by Hollywood liberals and other powerful figures that can only be obtained from the blood of frightened and abused children.

In reality, however, Adrenochrome does not produce psychedelic effects and can be purchased by countless chemical suppliers online. While the compound has not been approved for medical use by the FDA, a version of Adrenochrome has been used by some medical professionals overseas to treat blood clots.

The false claims surrounding Adrenochrome stretch back to the 1950’s when some scientists hypothesized that excess amounts of the compound could cause schizophrenia.

Fast forward to the modern day, Adrenochrome once again captured the public’s attention after a fake news website falsely claimed that a video depicting former Secretary of State Hillary Clinton sacrificing a child had leaked onto the dark web. No such video ever existed to begin with.

Despite no video and a thorough debunking by numerous outlets, the conspiracy theory surrounding Adrenochrome and child sacrifice exploded among right-wing internet users.

The video regarding the Adrenochrome patent has also spread widely across social media this month. Although the original TikTok has been deleted, countless users have made duets of the clip.

“We HAVE TO UNITE!!” one user said in response. “OUR CHILDREN DESERVE LIFE.”

As far as the video, the patent shown is actually real and was first filed in 1982. But nowhere in the patent, which has been publicly available online for years, does it mention anything about harvesting the blood of children to produce the mundane compound.

The QAnon movement, which heavily promotes the Adrenochrome conspiracy theory, has led to violence, child kidnapping, and other disturbing events.

Although the issue has been repeatedly debunked, the viral TikTok video concerning Adrenochrome’s patent shows how such false claims can continue to thrive even when no evidence exists to support them.