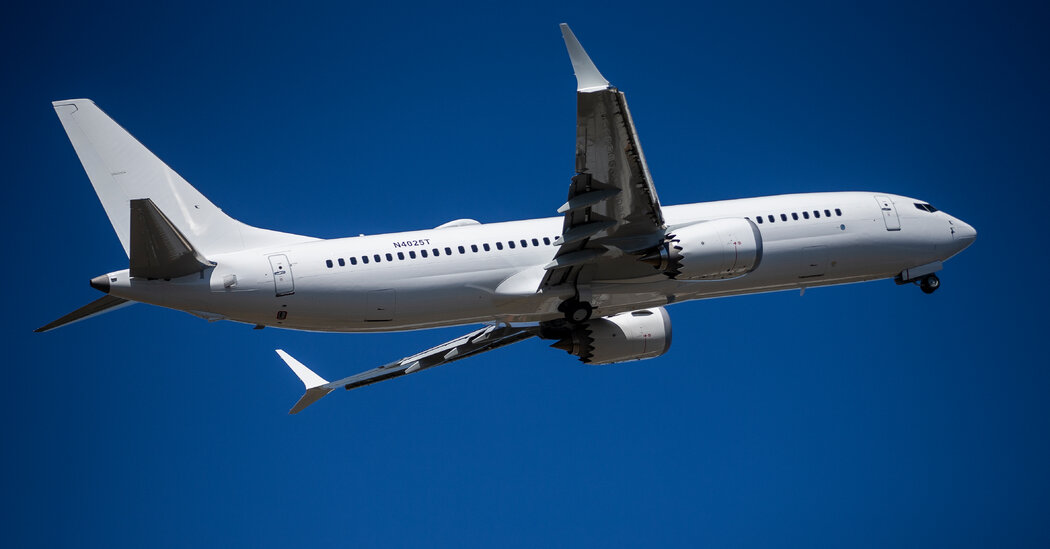 The Federal Aviation Administration on Wednesday cleared the way for Boeing’s 737 Max to resume flying, 20 months after it was grounded following two fatal crashes blamed on faulty software and a host of company and government failures.

The decision ends a devastating saga for Boeing, which had predicted billions of dollars in losses stemming from the Max crisis even before the coronavirus pandemic dealt a ruinous blow to global aviation. The agency’s chief, Stephen Dickson, signed an order Wednesday formally lifting the grounding.

“The path that led us to this point was long and grueling, but we said from the start that we would take the time necessary to get this right,” he said in a video message. “I am 100 percent comfortable with my family flying on it.”

The Max was grounded worldwide in March 2019 when the F.A.A. joined regulators in dozens of other countries in banning the plane after the crashes in Indonesia and Ethiopia killed all 346 people on board.

Investigators have attributed the crashes to a range of problems, including engineering flaws, mismanagement and a lack of federal oversight. At the root was software known as MCAS, which was designed to automatically push the plane’s nose down in certain situations and has been blamed for both crashes.

In August, the F.A.A. determined that a series of proposals by Boeing — including changes to MCAS, flight crew training and the jet’s design — “effectively mitigate” its safety concerns. Mr. Dickson, a former Delta Air Lines pilot, took the controls on a test flight in September, saying he liked what he saw.

In a news conference on Tuesday in anticipation of the F.A.A. announcement, relatives of victims on the second plane that crashed, Ethiopian Airlines Flight 302, questioned whether Boeing had done enough to address safety concerns with the plane.

“Aviation should not be a trial-and-error process; it should be about safety,” said Naoise Ryan, whose husband, Mick, was aboard that flight on March 10, 2019. “If safety is not prioritized, then these companies should not be in business.”

In a letter to employees, Boeing’s chief executive, David Calhoun, welcomed the lifting of the ban, promising to proceed deliberately with the plane’s return to service and to “never forget” the victims of the crashes.

“We will honor them by holding close the hard lessons learned from this chapter in our history to ensure accidents like these never happen again,” he said.

Now that the F.A.A. has lifted its grounding order, regulators around the world are expected to follow suit, though some may take their time in wrapping up their own in-depth reviews. The agency has worked with its counterparts in Canada, the European Union and Brazil on revised pilot training requirements for the Max.

Even in the United States, it could be months before the Max starts carrying passengers again. The F.A.A. must still approve pilot training procedures for each U.S. airline operating the Max, planes need to be updated, and airlines suffering from a huge decline in traffic during the pandemic may feel little urgency to act quickly.

On an investor call last month, the American Airlines chief executive, Doug Parker, predicted that the carrier would not resume Max flights before late December if the order came in November.

United Airlines said Wednesday that it expected to start flying the Max in the first quarter of next year after 1,000 hours of work on every plane and “meticulous technical analysis.” Southwest Airlines said it did not expect to resume flights until the second quarter.

The Air Line Pilots Association, which represents nearly 60,000 pilots in North America, including those at United and Delta, said in a statement that it was still reviewing changes to training procedures, but that the proposed engineering fixes “are sound and will be an effective component that leads to the safe return to service.”

The F.A.A. decision removes some uncertainty as Boeing seeks to rehabilitate its reputation, start fulfilling longstanding orders for the Max and manage the sharp slowdown in business caused by the pandemic.

The company has lost more than 1,000 orders this year, mostly for the Max, after accounting for orders that either were canceled or are likely to fall through. Aircraft contracts typically allow buyers to cancel or renegotiate terms if deliveries are delayed, adding to the urgency for Boeing to resume delivering the planes. Still, the company has more than 4,200 orders in its backlog, most of them for the Max.

The single-aisle plane is the latest in Boeing’s 737 line, an industry workhorse widely used by airlines around the world for short to intermediate distances. Southwest, for example, has more than 730 planes, all of them versions of the 737, including 34 Max jets. The airline has more on order, but its chief executive, Gary Kelly, said this week that Southwest was in no rush to expand its fleet.

For decades, Boeing had taken an incremental approach to the 737, choosing to update the plane rather than conceive a new model. That strategy had benefits, including reducing the need for costly pilot retraining. But it also resulted in a patchwork design that sometimes required workarounds. When larger, more efficient engines were added to the plane, they caused the Max to tilt up during certain maneuvers. MCAS — for maneuvering characteristics augmentation system — was programmed to counter that.

In both crashes, faulty sensors activated the software, sending the planes toward the ground as the pilots struggled to pull them back up. In a September report, Democrats on the House Transportation and Infrastructure Committee said internal Boeing documents showed that concerns raised by employees about MCAS had been dismissed or insufficiently addressed. That report and one from the Transportation Department’s inspector general accused Boeing of misleading the F.A.A. by playing down the complexity of MCAS, perhaps to avoid costly pilot training.

The House committee also faulted the agency’s practice of outsourcing some certification functions to employees of the companies it oversees.

On Tuesday, the House passed a bipartisan bill aimed at changing F.A.A. certification procedures and requiring an expert panel to review Boeing’s safety culture. The Air Line Pilots Association applauded the legislation, saying that it included much-needed changes to the certification process.

Boeing is nearing the end of a dreadful year. The pandemic has bruised its airline clients, leading to layoffs across the industry. Boeing expects to start 2021 with a global work force of about 130,000, nearly 19 percent fewer than it had at the start of this year. Also, quality concerns have slowed deliveries of its wide-body 787 Dreamliner.

Still, despite the twin crises of the Max grounding and the pandemic, there is hope. Orders for the Max may be difficult to cancel; some airlines, like Southwest, rely exclusively on Boeing planes, making it difficult to switch to the other major manufacturer, Airbus; and the Max offers savings on maintenance and fuel that may be difficult for some to pass up, especially as corporate clients pressure airlines to cut carbon footprints.

Boeing’s stock has risen more than 40 percent this month, with investors encouraged by news from Pfizer and Moderna that coronavirus vaccines under development appear to be highly effective.