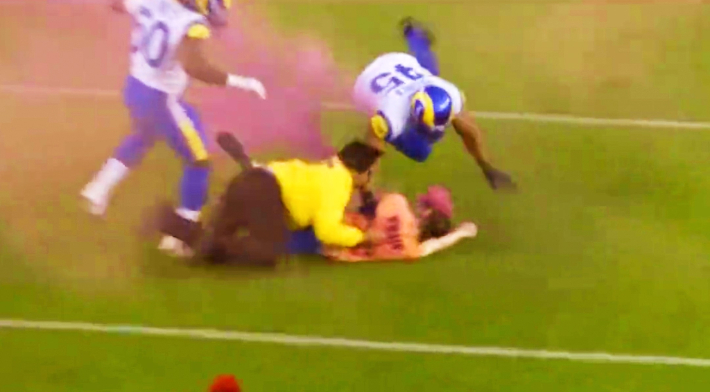 The first half of Rams-49ers saw a lot of defense being played, with a few big plays helping the Niners to a 14-6 lead going into the break — none bigger than Deebo Samuel’s unbelievable 57-yard catch and run for a touchdown in the second quarter.

The Rams had plenty to clean up, including their tackling on that play, and luckily they got a chance to work on that at the end of the half in a unique way. Ahead of a Rams punt, a protester ran onto the field with a pink smoke flare and ran up and down the field, evading security, until he arrived at the Rams sideline, where Bobby Wagner took out some frustration on the guy by absolutely lighting him up with a hit.

While the main ESPN broadcast can’t show it, the Manningcast luckily takes some liberties with their feed and Peyton successfully lobbied to get it up there and loved every second of seeing Wagner smoke this fan/protester.

Wagner joins a long line of NFL players who have gotten to get some licks in on idiots on the field, most recently we saw Stefon Diggs crack a fan who ran on the field on a $1,000 bet in Kansas City, which is certainly not worth it. It’s never a good idea to run onto any field during a sporting event, but it’s especially dumb to do so when there are literally dozens of giant men out there whose entire job is chasing down and hitting people as hard as possible.