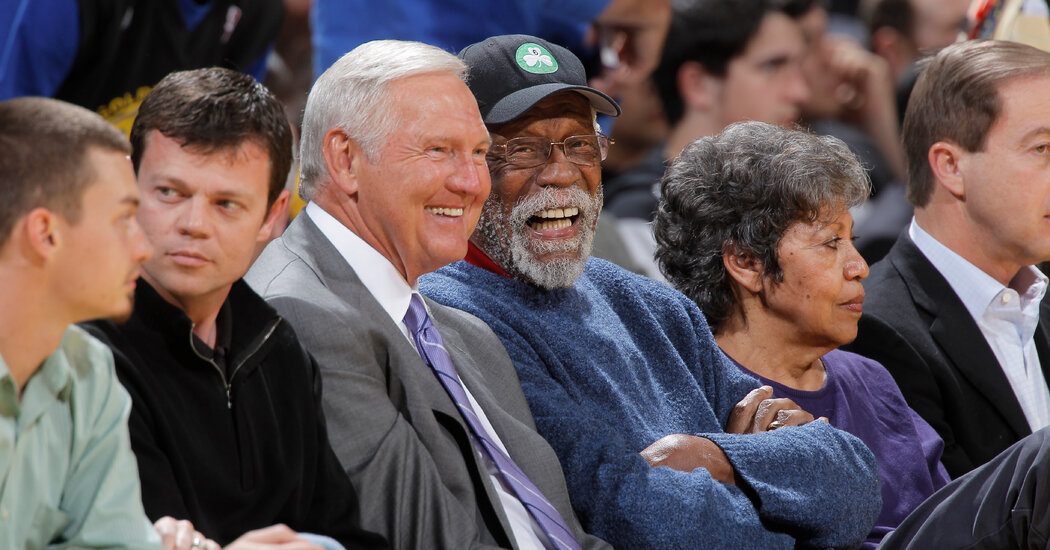 It was a day to celebrate Elgin Baylor, whom the Los Angeles Lakers had just honored with a statue outside their home arena. On that warm evening in April 2018, one of Baylor’s greatest antagonists showed up and sat prominently in the crowd.

Bill Russell would never blend in anywhere, and certainly not in his green polo shirt at a Lakers event.

Jerry West, Baylor’s teammate all those years ago, stood behind a lectern and couldn’t help but note Russell’s attendance.

“All the losses to this gentleman over here,” West said. “I forget your damn name. What is it? Bill? Last name — Bill Russell, is that it?”

The crowd loved the bit, and West continued.

“There’s more incredible stories in a losing locker room — and particularly when it’s the same damn team and this smiling jackass over here.”

A few feet away, Russell was indeed smiling, widely. He laughed throughout West’s performance. Russell led the Boston Celtics to 11 championships, seven of them with N.B.A. finals wins over the Lakers — and all of them colored in Celtics green.

West played on six of those Lakers teams that lost to Russell’s Celtics, and the two became friends later in life. He made sure the assembled guests that day didn’t confuse his playful jabs for actual animus, telling them he loved Russell.

It was a bit of a role reversal for Russell, who in his later years was usually the one delivering zingers. Deeply respected for what he did on the court and off it, his jabs were always met with laughter, and in the moments when he was sincere, his earnestness was met with profound gratitude from players for whom Russell changed the N.B.A.

On Sunday, Russell’s family announced that he had died peacefully with his wife by his side. He was 88. The statement mentioned Russell’s championships — two in high school, two in college, one in the Olympics and 11 in the N.B.A. — nodded to his personal accolades and highlighted his lifelong fight against racial discrimination. It also included an entreaty that people keep Russell in their prayers. “Perhaps you’ll relive one or two of the golden moments he gave us, or recall his trademark laugh as he delighted in explaining the real story behind how those moments unfolded,” the statement read.

The basketball world has celebrated him by remembering all of his life, including the moments of humor.

“Where did they find all these tall people?” Russell asked, onstage at an N.B.A. awards show in 2017. The league had gathered other great centers — Shaquille O’Neal, Alonzo Mourning, Dikembe Mutombo, David Robinson and Kareem Abdul-Jabbar — to present Russell with a lifetime achievement award.

He looked at the group intently and pointed at each of them. Then he cupped his hand around his mouth and, in a stage whisper, used colorful language to say he would beat them all.

A year later he sat in the audience of the same awards show.

The camera panned to Russell who smiled and extended his middle finger to Barkley.

Later that night, Russell posted an explanation on Twitter: “Sorry everyone, I forgot it was live TV & I can’t help myself whenever I see Charles it just is pure instinct.”

His jokes often dripped with well-earned bravado, and they played well because of the awe with which the basketball players of future generations viewed him.

They marveled at his talent on the court, how he became the most feared defender of his era — a dominant force before blocks became an official statistic. But even more than that they respected the way he became the N.B.A.’s first Black superstar in an era of segregation, who was born in the Jim Crow South and fought racism in society and in the N.B.A. Russell once led a strike of a game in Kentucky after he and his Black teammates were denied service at a restaurant. In the 1950s, he spoke out about the N.B.A.’s unofficial quota system that prevented more Black players from being in the league.

There are some Hall of Fame players who aren’t shy about sharing their opinion that the recent basketball eras were much worse than their own.

As Russell aged, though, he often showed that he reciprocated the love and respect he garnered from some of the game’s younger stars.

At the All-Star Game in 2008, a camera caught him sharing a tender moment with Lakers guard Kobe Bryant.

“I watch a lot of your games,” Russell told Bryant.

“Thank you,” Bryant said, with a smile spreading on his face.

Russell told Bryant that when he watches games he tries to understand what certain players’ agendas are in those games, and then see how well they were able to carry out their plan.

“Me too,” Bryant said, eagerly. “But I got that because I read your book.”

The two shared a laugh and then Russell told Bryant he was as proud of him as if he were his own son. Bryant thanked him again and they embraced.

Years later, Bryant said that Russell had become a mentor for him, that he simply picked up the phone to call and ask for Russell’s advice.

On Jan. 26, 2020, Bryant died in a helicopter crash with his daughter Gianna and seven other people. The Lakers and Celtics played each other in Los Angeles a few weeks after the crash. Russell attended the game wearing a Lakers jersey — Bryant’s jersey — and a hat with Bryant’s initials stitched in purple inside a yellow heart.

Their relationship transcended the bitter Lakers-Celtics rivalry just as Russell’s relationship with West did.

He also shared a special bond with Kevin Garnett, who in 2008 took the Celtics to their first N.B.A. finals since 1987. Garnett started his career with the Minnesota Timberwolves, but was traded to the Celtics in 2007.

“You’re my favorite player to watch; you never disappoint me,” Russell told Garnett in an arena hallway during that season. ESPN aired the footage in 2008 before an interview between Russell and Garnett.

“You crack so many jokes,” Garnett said. “I don’t know if that’s real or not.”

“No, it’s real,” Russell replied, as Garnett’s laughter turned serious. “And you never disappointed me. And you finally got in the right uniform.”

The clip then showed an interview between Russell and Garnett. They sat in chairs across from each other, beside a backdrop of Celtics memorabilia.

“I think that you’re going to win at least two or three championships here,” Russell said. “And if you don’t but I see you play the way you should play, I’ll share one of mine with you.” He added: “If you play the way you play and you dedicate yourself to doing it, they will come.”

Later in the conversation, Russell gave Garnett a similar message to the one he gave Bryant.

“I couldn’t be any more proud of you than I am of my own kids,” Russell said.

Russell and Garnett looked at each other meaningfully. It was hard to tell exactly behind his square cut glasses, but Russell’s eyes seemed to moisten as he spoke to Garnett.

He ended with a joke about how Garnett’s No. 5 was close to No. 6, his own number, and then laughed, his voice booming, raspy and bubbly all at once — a laugh few who had heard it could ever forget.