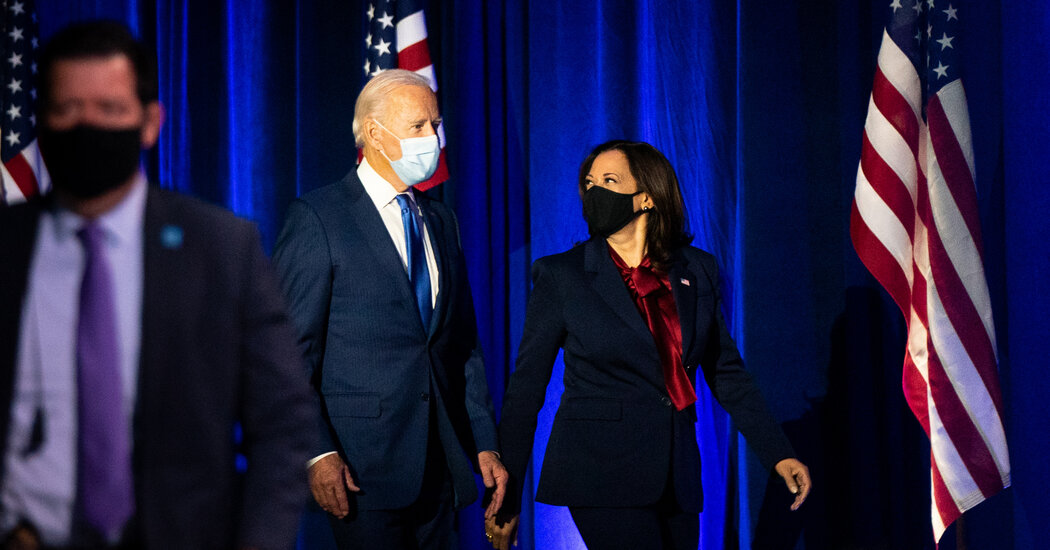 LONDON — For a world that held its breath as Americans went to the polls last Tuesday, the triumph of Joseph R. Biden Jr. over President Trump provoked many emotions, but above all, a profound sigh of relief.

As news of Mr. Biden’s victory reverberated from Europe and the Middle East to Asia and Latin America on Saturday, foreign leaders showered him with congratulations. Diplomats and commentators expressed gratitude, satisfaction and even jubilation that a new president would bring a much-needed return to normalcy — something that vanished alarmingly the day Mr. Trump took office.

“Welcome back America!” the mayor of Paris, Anne Hidalgo, said in a Twitter message to Mr. Biden and Vice President-elect Kamala Harris.

Prime Minister Justin Trudeau, hailing Canada’s historic friendship with the United States, said, “I’m really looking forward to working together.” President Emmanuel Macron of France said, “We have a lot to do to overcome today’s challenges. Let’s work together!” Chancellor Angela Merkel of Germany declared, “Our trans-Atlantic friendship is irreplaceable, if we want to overcome the great challenges of our time.”

For many world leaders, the importance of this election was as much about removing Mr. Trump as ushering in Mr. Biden.

The former vice president is a familiar fixture on the global stage, a centrist Democrat who is likely to restore the traditional habits and methods of American power abroad. Mr. Trump, who held no office before the presidency, has been a great disrupter, leaving alliances in tatters and casting into doubt the liberal international order that the United States helped build after World War II.

“I feel optimistic for the first time in quite a long time,” said Simon Fraser, a former head of Britain’s Foreign Office. “I’m not expecting a radical change in American foreign policy, but I do expect a change in body language and tone, and a shift away from unilateralism to collaboration with allies.”

Nicola Sturgeon, the first minister of Scotland, did not wait for the race to be called, tweeting on Friday evening, “The world can be a dark place at times just now — but today we are seeing a wee break in the clouds.”

Britain’s prime minister, Boris Johnson, whom Mr. Trump has treated as an ideological twin because of his populist tactics and championing of Brexit, issued a more restrained statement, but singled out Ms. Harris for her “historic achievement” as the first woman elected vice president.

“The U.S. is our most important ally,” he said, “and I look forward to working closely together on our shared priorities from climate change to trade and security.”

For allies in Europe, the relief was palpable. Mr. Trump backed Brexit because he saw it as a way to undermine the European Union. He levied tariffs on European exports, pulled out of the Paris climate accord and hectored France and Germany about not paying enough to support NATO.

Even European leaders who tried to establish a rapport with Mr. Trump, like Mr. Macron, eventually gave up. Diplomats said these leaders hoped now to reset the trans-Atlantic relationship, particularly since Mr. Biden is expected to emphasize repairing frayed ties with Europe.

“You will be able to have a coherent conversation with a normal guy,” said Gérard Araud, the former French ambassador to Washington, who sat in on often discursive exchanges between Mr. Trump and Mr. Macron.

Mr. Araud said the arrival of Mr. Biden — a “nice guy, a smiling guy,” as he put it — would have emotional resonance for many Europeans, particularly older ones, who struggled to reconcile Mr. Trump’s unyielding “America First” vision with the generous, if imperfect, country they knew in the postwar period.

“They need to love America,” he said. “There is a sentimental relationship with America, which the Americans always underestimate.”

Few Europeans, however, believe that America will ever return to the intense global engagement that characterized it at the peak of its power. The deep divisions in American society and the close election suggested to some that the United States under a Biden presidency would remain inward-looking and preoccupied by domestic issues.

Le Monde, one of France’s leading newspapers, said in an editorial this week that “Trumpism” was a “lasting heritage of American politics,” not an accident or brief “interlude.”

Prime Minister Benjamin Netanyahu of Israel, a staunch ally of Mr. Trump who had a chilly relationship with his predecessor, Barack Obama, waited 12 hours before offering his congratulations to Mr. Biden and Ms. Harris.

“Joe, we’ve had a long & warm personal relationship for nearly 40 years, and I know you as a great friend of Israel,” Mr. Netanyahu said in a tweet, which he followed up with one thanking Mr. Trump for his friendship.

Mr. Biden and Mr. Netanyahu do go back a long way. But in 2010, Mr. Netanyahu alienated the then-vice president when his government announced the approval of 1,600 Jewish settlements in the West Bank while Mr. Biden was still in the country. Hillary Clinton, who was secretary of state at the time, berated Mr. Netanyahu for what the White House viewed as an affront.

Across the Arab world, people followed the election for a taste of what they lack at home: the opportunity to change the ruler through the ballot box.

“It is fascinating,” said Basil Salloukh, an associate professor of political science at the Lebanese American University in Beirut. But he said he did not expect major shifts in United States policy toward the region.

“Tomorrow we will wake up and realize that the U.S. is still the new imperial power and supports regimes and causes that are not on the side of freedom and democracy globally,” Mr. Salloukh said.

There was no immediate reaction from Arab leaders like Crown Prince Mohammed bin Salman of Saudi Arabia, some of whom cultivated close ties with Mr. Trump.

Turkey’s strongman president, Recep Tayyip Erdogan, speaks with Mr. Trump about once a month — a relationship that has helped the country avoid sanctions and heavy fines. News organizations close to the Erdogan government have openly supported Mr. Trump and grew bitter at signs of his losing.

Mr. Biden’s long political career has left him with a vast Rolodex of contacts among world leaders. When he visited Turkey in 2011, Mr. Erdogan, who was recuperating from a medical procedure, invited him to his private residence. The two men, clad in slippers, had a two-hour conversation about sensitive issues, including Syria and Turkey’s opposition to new sanctions against Iran.

“I don’t want to sound like I’m inflating my importance or relationship with him,” Mr. Biden told reporters, “but we have listened to each other. And he was genuinely listening to my perspective and wasn’t challenging it.”

Mr. Biden has a lengthy foreign policy record from his White House and Senate days, which foreign leaders are mining for clues about how he might change the direction of U.S. policy toward their countries.

In Afghanistan, officials have been rooting for a Biden victory and the rollback of Mr. Trump’s policies, namely the gradual withdrawal of Americans troops under a February peace agreement with the Taliban, signed in Qatar.

Iran, too, sought hope in a new beginning. Many Iranians rejoiced at the defeat of a president who devastated their economy with sanctions, escalated tensions to the brink of war and assassinated a top general.

“Trump and his followers are collapsing into history’s trash can while our Iran still stands,” said Ali Gholizadeh a political analyst from Mashhad Tehran.

Not everybody welcomed the change.

In Hungary, where Prime Minister Viktor Orban has presided over what he has dubbed an “illiberal state,” the far-right Volner Party said it would rally in front of the American Embassy in Budapest against “possible electoral fraud in the U.S. presidential election and in solidarity with President Donald Trump.”

Hu Xijin, the editor of China’s nationalistic tabloid Global Times, said Mr. Trump had “yet to show a gesture of preparing to accept defeat,” adding that “American society is now highly divided, which creates the soil for further political derailment.”

But Mr. Hu’s outlet, Global Times, tweeted soon after that “Biden’s win could offer some ‘breathing room’ for China-US relations.’”