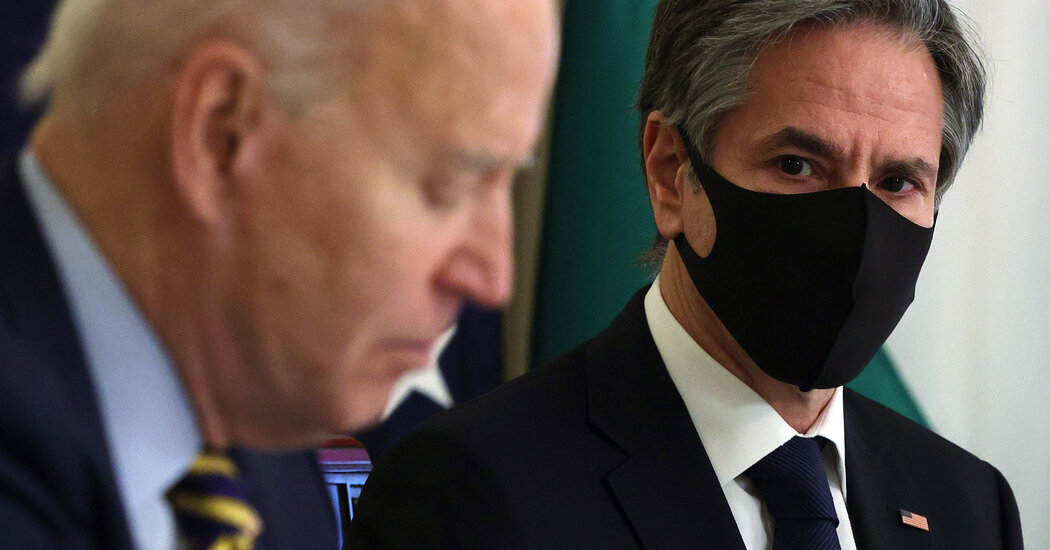 This week, he is attempting both as he dispatches two of his most senior envoys to Japan and South Korea in his administration’s highest-level foreign travel since it took office in January.

The visits to the United States’ strongest partners in East Asia are a prelude to the Biden administration’s opening round of face-to-face contact with Beijing. One of the envoys, Secretary of State Antony J. Blinken, will travel on to Alaska and join Jake Sullivan, the national security adviser, in a meeting with China’s two top diplomats.

The administration sees the gathering as a chance to establish ground rules and set red lines for a relationship that Mr. Blinken has called “the biggest geopolitical test of the 21st century.” American officials have described it as “a one-off session” to identify issues where Washington can work with Beijing — and then “lay out, in very frank terms, the many concerns that we have,” Mr. Blinken told Congress last week.

The flurry of diplomacy, which began on Friday with a virtual summit with the U.S.’ so-called Quad allies — Australia, India and Japan — establishes the Asia-Pacific as a top priority for the Biden administration after Barack Obama’s halting “pivot” to Asia and Donald J. Trump’s bluntly transactional approach to alliances in the region.

The dialogue with allies less than two months into the new administration also underlines the president’s goal of shoring up international partnerships to face down adversaries and, in turn, further American interests.

“The more China hears, not just our opprobrium, but a course of opprobrium from around the world, the better the chance that we’ll get some changes,” Mr. Blinken told a House Foreign Affairs Committee hearing in Washington last week.

It will not be easy. China, having brought the coronavirus to heel early in the pandemic, has only bolstered its economic position as rivals in the West struggle to recover. And militarily it has narrowed the gap with the United States through huge investments. Those strengths have helped embolden China on the global stage.

Even as Washington tries to chart a new, if still wary, relationship with Beijing, American officials on Friday downplayed the notion that China would overshadow the three days of discussions in Tokyo and Seoul. Mr. Blinken and Defense Secretary Lloyd J. Austin III are expected to discuss a range of subjects, including the pandemic, climate change and the large U.S. troop presence in the region.

Relations between Japan and South Korea, which have reached a low point over historical disputes, are likely to be a topic of conversation. Also on the agenda will be the month-old military coup in Myanmar and North Korea’s nuclear and missile programs, which remain firmly in place after the Trump administration’s failed flirtation with the North’s leader, Kim Jong-un.

The decision to make Japan the first destination for Mr. Blinken and Mr. Austin was seen as a significant and reassuring development in Tokyo, which worked hard to maintain close ties with Mr. Trump even as he demanded huge increases in payments to keep American troops in the country. On Friday, the White House announced that Prime Minister Yoshihide Suga would be the first foreign leader to meet with Mr. Biden in Washington.

“At the end of the Trump administration, with regard to Asia, we were bickering with our allies over how much to pay for the cost sharing in terms of defense,” said Victor Cha, who oversaw Asia policy at the White House during the George W. Bush administration and advises the Center for Strategic and International Studies in Washington. “We had a very unilateral view when it came to alliances as a nation, almost a disdainful view with regard to them.”

“At the same time,” Mr. Cha said, “China was using its economic leverage all around the region to bully other countries.”

The Biden administration’s strategy could prove just as dizzying. Mr. Blinken has described seeking a relationship that is based at once on cooperation, competition and, as needed, confrontation with China.

To make it work, the United States is banking on backup from allies like Japan and South Korea. Both countries have tried to walk a fine line on China: Their prosperity depends on trade with Beijing, but they break with China on matters of security, democracy and human rights.

Tokyo has grown more vocal as the Chinese military has made incursions around islands that Japan administers in the East China Sea, known in Japan as the Senkakus and in China as the Diaoyu. Seoul has used its temperate relations with Beijing as a pressure tactic against North Korea, which depends on China to keep its economy afloat.

For their part, China’s leaders have said they are eager to get the relationship with the United States back on an even keel. Some analysts have warned that any steps toward a détente could just buy China more time to develop technological and military capabilities before a diplomatic breakdown.

“As two countries with different social systems, China and the United States naturally have differences and disagreements,” Wang Yi, the Chinese foreign minister, said at a news conference in Beijing on March 7. Mr. Wang and Yang Jiechi, China’s top diplomat, will be meeting with Mr. Blinken in Alaska.

Mr. Wang called it normal to have a “healthy competition on a fair and just basis for the purpose of self-improvement and mutual enhancement, rather than finger-pointing or zero-sum competition.”

Yet Chinese leaders also appear concerned about the Biden strategy of rallying allies into a coherent bloc against China, something that could hurt Beijing politically and economically. Last week, for example, the Quad countries announced an effort to ship coronavirus vaccines to Southeast Asia, countering China’s own efforts at so-called vaccine diplomacy.

Mr. Wang cited the pandemic, the economic recovery from it and climate change as areas where China and the United States could cooperate, though he provided no details. But he said that the United States and others had no right to interfere in what he described as internal matters — human rights abuses against ethnic Uighurs in China’s western Xinjiang region, efforts to subvert democracy in Hong Kong and surveillance and repression in Tibet.

He also drew a “red line” on the question of Taiwan, the self-governing democratic island that Beijing claims as an inalienable part of a greater China.

Days later, an American destroyer passed through the Taiwan Strait. The United States describes such voyages as routine, but they are seen as hostile by China. It was the third since Mr. Biden came into office, signaling support of Taiwan.

While Japanese officials are sure to seek assurances from Mr. Austin that the U.S. military would come to Japan’s aid in the event of a conflict with China over the Senkaku Islands, his time in Seoul is expected to be consumed with the question of whether to resume regular large-scale military exercises with South Korea, which Mr. Trump abruptly canceled.

Last week, the two countries reached a cost-sharing agreement for stationing American troops in South Korea, a presence that Mr. Trump had also threatened to end.

After the meetings in Tokyo and Seoul, Mr. Austin will travel to India, which is at its lowest point in relations with China in decades after a deadly border incursion last summer. Mr. Blinken will arrive in Alaska on Thursday for the meeting with the Chinese envoys.

As he wished Mr. Blinken luck for the talks, Representative Michael McCaul of Texas, the top Republican on the House Foreign Affairs Committee, warned that “we cannot treat them as a normal adversary.”

“We are truly in an ideological struggle fighting for democracy against authoritarianism and promoting freedom over oppression,” Mr. McCaul said. He added that the United States had for four decades “turned a blind eye” to China’s ruling Communist Party in hopes of persuading its leaders to follow international norms.