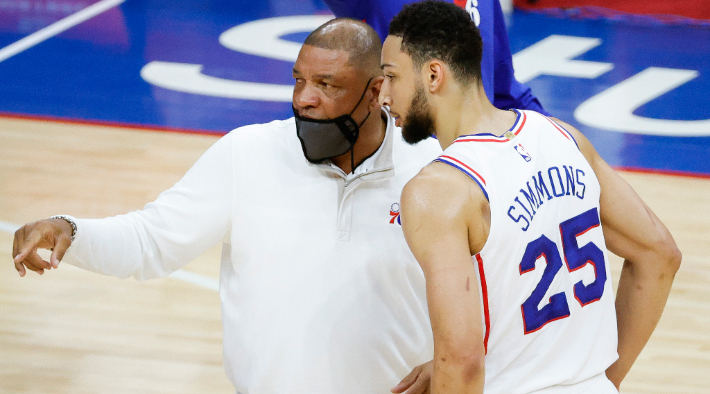 Ben Simmons showed up to the Philadelphia 76ers’ practice facility on Thursday, where he was expected to go through an individual workout. But in a twist that probably isn’t a particularly big surprise, that did not happen — Adrian Wojnarowski of ESPN reported that Simmons popped into the facility and then left without doing said workout.

It did not take long to figure out what, exactly, was going on. According to Wojnarowski, Simmons showed up and told the Sixers’ training staff that he is dealing with back tightness, for which he received treatment.

Ben Simmons described back tightness to several Sixers staff members and was briefly treated for it today, sources tell ESPN.

The team’s medical staff, after treating him, gave Simmons the all clear to go ahead and do whatever the coaching staff wanted him to do. Despite this, he went home.

The Sixers’ medical staff cleared Simmons to participate in the workout after the back treatment, sources tell ESPN. The Sixers had hoped to see Simmons in the workout today and have him go through shoot-around on Friday morning prior to game vs. Nets. https://t.co/WygyAnShmz

Shams Charania of The Athletic reported that Simmons doesn’t believe he is in a place where he can suit up for the team amid a tumultuous offseason where he’s made clear his desire for a trade. As a result, Charania says, there is no expectation that Simmons will take the floor any time soon.

Sources: 76ers All-Star Ben Simmons is currently not mentally ready to play for the team and was receiving treatment on his back today due to ramp up process. He will miss Friday’s home opener vs. Nets and is not expected to play for an undetermined period of time.

The news comes on the heels of the Sixers winning their season opener on Wednesday night against the New Orleans Pelicans, 117-97. The game on Friday against Brooklyn will be their home opener.