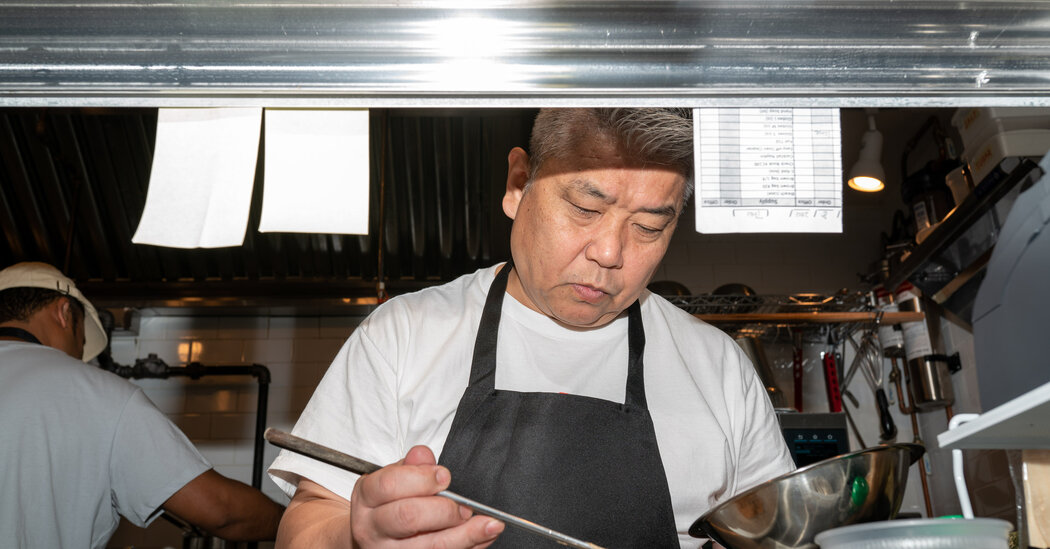 The chef Chikara Sono, who earned high praise during his tenure at Kyo Ya in the East Village, has opened this new Lower East Side restaurant, which seats 54 people ready for inventive, seasonal Japanese fare. The menu includes dishes like satsuma potato tempura, shrimp mousse spring roll, anago fish and chips, and Hokkaido-style skirt steak. Mr. Sono will also serve BBF Sushi Bombs, based on the rice balls served at Brooklyn Ball Factory in East Williamsburg, Brooklyn. (His partners also own that restaurant, as well as Bozu, Samurai Mama and more.) Nana Shimosegawa, who was at Angel’s Share in the East Village, created the cocktails; the sakes and other beverages are the work of Chizuko Niikawa, a sake sommelier. The space is done in pale tones accented by decorative spheres, a reference to the signature sushi balls. Later this year, Mr. Sono will open an eight-seat counter called Kappo Sono in the back of the restaurant, where the chef will serve the kind of multicourse kaiseki menus for which he became known.

The chef Dan Barber and his partners in Blue Hill in Greenwich Village, his brother, David, and sister-in-law, Laureen, have reopened the restaurant under this new name. For the past year and a half, the Blue Hill space was used for preparing food delivery boxes. Now, it’s devoted to group dining, for parties of four, six or eight. “You could say I’m trying to create community,” Mr. Barber said. The menu, $115, plus beverages, tax and gratuity, is set and served family style, like what’s called a family meal (supper for staff) in a restaurant. How long it will continue in this format has not been determined.

What was Ousia, an airy Greek bar and dining room from the Livanos Restaurant Group in the dramatic Via57West building, has reopened with this new name and replaced much of its Hellenic menu with a more international approach. The chef, Vasiliki Vourliotaki, is still preparing dips and dishes like tzatziki, Greek salad and octopus souvlaki, but they share the menu with gochujang kimchi wings, beef tataki noodle salad, pappardelle with short ribs, and steaks with the option of chimichurri sauce. Sandwiches, including a burger and a French dip, are satisfying main courses at dinner. Among the desserts is a baklava cheesecake.

In homage to the Greenwich Village vibe of yore, By Chloe, which has emerged from bankruptcy, has this new name. (The group agreed to change the name as part of a court ruling.) It will reopen its 185 Bleecker Street flagship in September, and has restaurants elsewhere in New York, as well as in Boston and Providence, R.I. The company will retain its commitment to a plant-based menu.