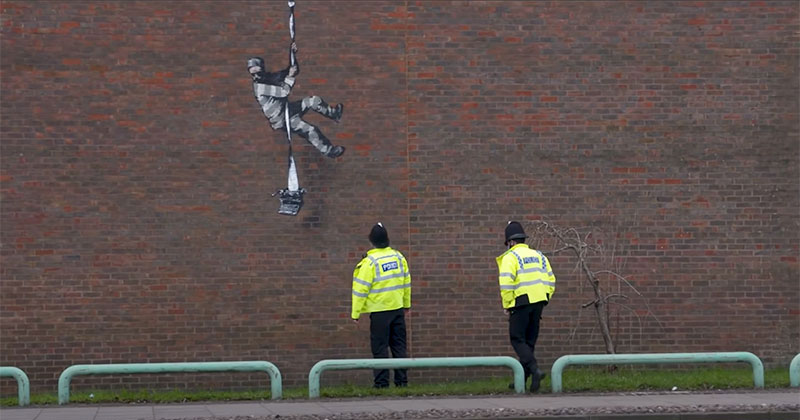 In a video uploaded to his only official online account—@banksy on Instagram—the legendary street artist channels his inner Bob Ross in this behind the scenes video entitled, “Create Escape”, with the famous art teacher’s clips and voice interspersed throughout.

Banksy’s latest street artwork, his first of 2021, was completed in Reading, England on the outside of a Victorian prison that has been vacant since 2013.

Its most famous inmate was Oscar Wilde, who was jailed from 1895 to 1897 after being convicted of gross indecency (i.e., a homosexual relationship, which was illegal at the time). Wilde’s time inside inspired the poem, The Ballad of Reading Gaol, written in exile after his release. [source]

Since its closure, the building has been used for film sets and major art exhibitions, included works by artists such as: Steve McQueen, Marlene Dumas, Nan Goldin, and Ai Weiwei.

The prison building is owned by the Ministry of Justice and was put up for sale in 2019, when a campaign was started to save it from being sold to property developers, in hopes it would be reappropriated as a cultural hub for the arts. Banksy may be hoping this latest effort helps bring the conversation back to the forefront. [source]