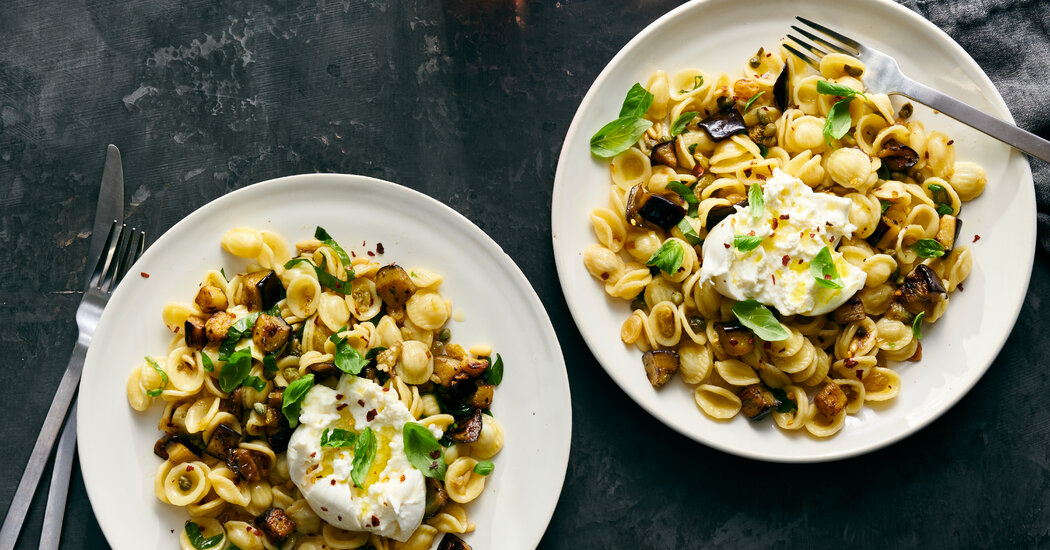 Good morning. I was on the road for a few days, and not cooking at all. The food was fine while traveling — wings and tots, a pepperoni and Parmesan croissant, a decent cheese steak, a better-than-decent Italian sub and a remarkable beet smoothie from a juice bar in Lorain, Ohio, that I drank in front of Toni Morrison’s childhood home. But I missed my kitchen, missed making food for the family, missed sitting at our table together with the dog asleep at my feet.

I made plans on the interstate, hurtling east toward home: to cook this eggplant caponata pasta with ricotta and basil (above), for instance; to make Thai-inspired chicken meatball soup; to bake triple-ginger muffins. It was a little bit like being at sea with limited provisions and looking forward to an epic feast upon the return to shore. I started thinking about Thanksgiving, about whether to deep-fry my turkey this year or to roast one with orange and sage. I daydreamed of aligot and hashed brussels sprouts with lemon. I fantasized about baking Julia Reed’s epic bourbon pecan pie.

But, of course, when I got home, I was exhausted and ordered a pizza instead. Cooking’s a habit, same as exercise. If you don’t do it, that becomes a habit, too.

Linguine with clam sauce got me back on track the next night, with one more can of clams than the recipe calls for — chopped sea clams for me, instead of the baby clams some use — and a little cream on top of the butter. Making the dish was as pleasant as riding a bike in a park after three months of not riding a bike in a park. And the eating was revelatory: sweet-salty and comforting, a taste of home.

I’ll double down now, and bake the Moroccan orange cake known as meskouta

Advertisement
to eat with morning tea. I’ll assemble a galbijjim inspired by the one at Han Oak in Portland, Ore. I’ll blender up some smoky eggplant soup.

How about you? What will you cook this week to make life better and more enjoyable, for yourself and those you feed? There are thousands and thousands of recipes to choose from on New York Times Cooking. (Check out this awesome recipe for chicken paillard with curried oyster mushrooms that Melissa Clark learned from the chef Eric Ripert! Regard this vegan sesame tofu with coconut-lime dressing and spinach from Nik Sharma!) Yes, you need a subscription to access them. Subscriptions make New York Times Cooking possible. Thank you for yours.

We’ll be standing by to offer assistance, should anything go sideways while you’re cooking or using our site and app. Just write: [email protected]. Someone will get back to you, I promise.

Now, it’s nothing whatsoever to do with minced garlic or the uses of fenugreek, but I commend to you the podcast “Firebug,” about a serial arsonist in Southern California and the novel that brought him down.

While you’re at it, check out this fascinating essay from Jon Mooallem in The Times, about traveling to Spokane, Wash., to watch a minor-league baseball game. It’s really not about that at all.

Finally, here’s Ligaya Mishan in T, on how we consume what we fear — and about the unsettling questions that raises. Enjoy that, and I’ll be back on Wednesday.