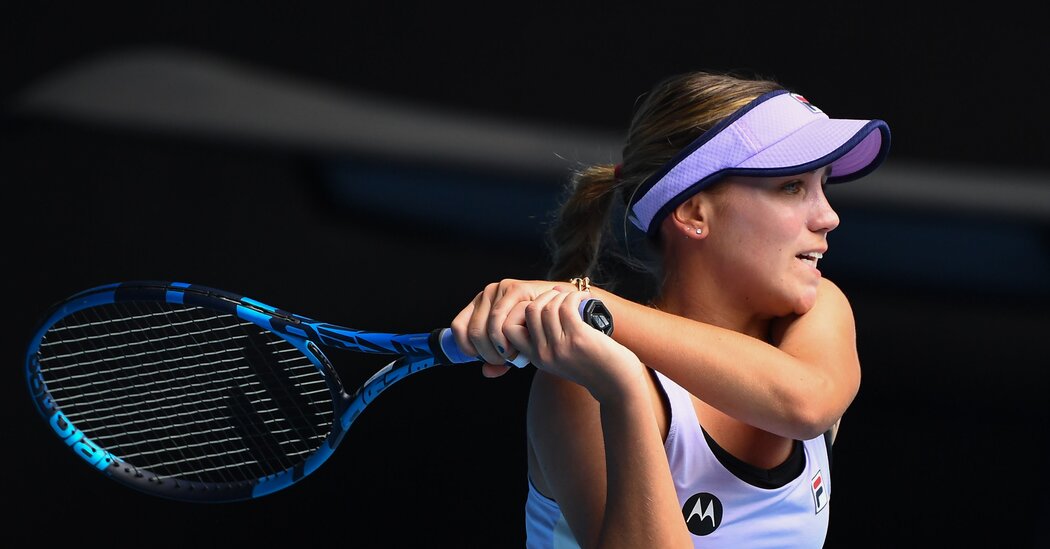 MELBOURNE, Australia — Sofia Kenin, the reigning champion, was knocked out of the Australian Open on Thursday as the unseeded Kaia Kanepi of Estonia beat her decisively, 6-3, 6-2.

Kenin’s second-round defeat was the first major upset of the tournament. Kenin, the No. 4 seed, was the WTA Player of the Year in 2020, when she won the Australian Open in February and made the French Open final in October.

She has struggled to find her form this year, though. She lost in the quarterfinals of the Abu Dhabi Open in January, dropping the third set, 6-0, to Maria Sakkari of Greece.

“She obviously played well,” Kenin said on Thursday, tears welling in her eyes during a post-match news conference. “I was obviously way too nervous.” A moderator offered her a tissue, which she refused.

Kenin, a 22-year-old American, was never in Thursday’s match against Kanepi, who is 35 and probably on the back end of her career. Physically imposing at 5-foot-11, Kanepi overpowered Kenin with 10 aces and also prompted her to make too many uncustomary errors. Kanepi closed out the match with two aces.

“I served well, and that helped me a lot,” Kanepi said after the match, which they played in humid, 90-degree weather. “My plan was to play aggressive.”

Kenin was expressionless as she grabbed her bags and hurried off the court. It was the second loss in 24 hours for the American, who dropped a tough doubles match with her partner, Belinda Bencic of Switzerland, on Wednesday in a third-set tiebreaker.

An hour after her defeat on Thursday, Kenin could not explain where her game and the fearlessness she had sometimes displayed had gone.

“I really don’t know what I am doing right now,” she said. “I’m not there 100 percent, my game, physically, mentally.”

The numbers told the story of the match. Kenin committed 22 unforced errors and failed to convert any of her seven break-point opportunities.

The WTA Tour will hold a tournament starting Saturday for women who lost during the first week of the Australian Open, and another tournament later this month in Adelaide. Kenin said she had not decided whether to play in those events or leave Australia.

Despite her success, Kenin has existed relatively under the radar compared to other young stars in women’s tennis, including Naomi Osaka and even the 16-year-old American Coco Gauff, who has yet to make a Grand Slam quarterfinal.

Kenin arguably had a better 2020 than Osaka and Simona Halep of Romania, but unlike those stars, she was not invited to play in an exhibition event in Adelaide last month before coming to Melbourne. Serena Williams, the 23-time Grand Slam champion, and Ashleigh Barty of Australia, the world No. 1, also took part in the Adelaide exhibition.

And though Kenin had badly wanted to come to Australia and repeat as champion, her performance will now serve as another mark of her inconsistency.

Before she won the Australian Open last year, Kenin had yet to make the quarterfinals of a Grand Slam in 11 tries. Then she went all the way. After the long tennis layoff of last spring and summer, she was the No. 2 seed at the U.S. Open in September, but she was beaten soundly in the fourth round by Elise Mertens of Belgium, the No. 16 seed.

She lost 6-0, 6-0 to Victoria Azarenka in Rome before the French Open, then went to Paris and made the final, where she lost in straight sets to Iga Swiatek, who was the 54th-ranked player in the world before that tournament.

Coming into the Australian Open, she said she felt tremendous pressure to defend her championship, though it may have been more internal than external.

Women’s tennis has tremendous depth right now, and Grand Slam championships have come to resemble free-for-alls. Just two women, Osaka and Halep, have won more than one Grand Slam since 2017.

“There are no easy matches in any tour event, any slam, anything,” said Barty, the top seed here. “I think every time you walk on the court, you have to try and be able to bring your best tennis to be able to compete with everyone.”