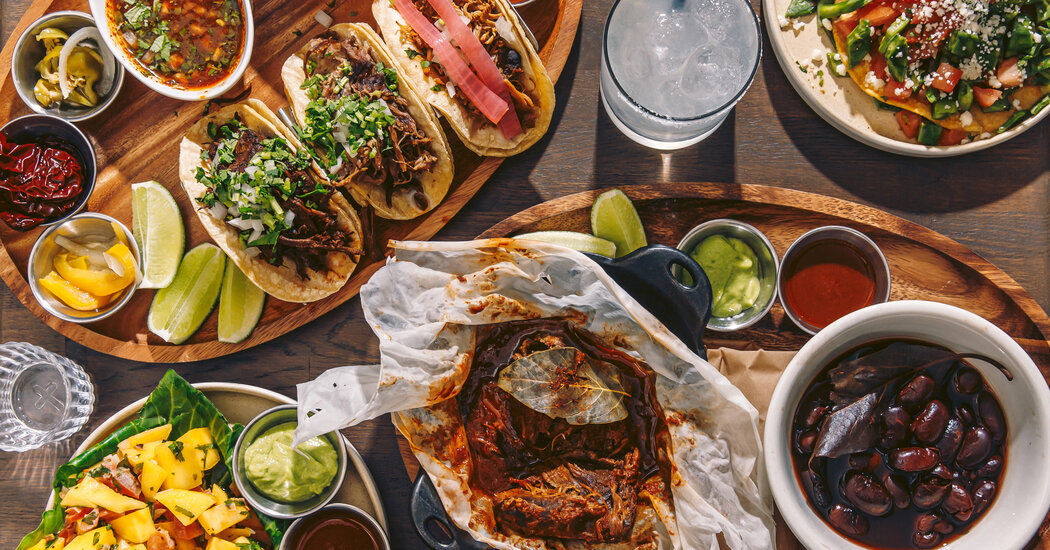 If you worked in an office in Midtown back when people used to work in offices in Midtown, there is a good chance that at some point you and your colleagues marked a birthday or a holiday or a new job at an oak-clad, beer-oriented pub on East 36th Street called the Ginger Man.

Across the street is its sister bar, Under the Volcano, where bottles of mezcal and tequila are lined up behind the bar instead of beer taps. The chance that you once celebrated there is smaller because Under the Volcano, which opened in 2000, went dormant for 12 years starting in 2008. Finally resurrected at the beginning of last year, it got less than two months before the first ban on indoor dining came down.

If you do have memories of Under the Volcano, you probably recall the drinks more clearly than anything you might have eaten. The food has been worth paying attention to since November, though, when Irwin Sánchez was hired to produce a brief but carefully considered lineup of tacos and other Mexican dishes. Shortly after he started, indoor dining was suspended again for more than a month. The bar is unlucky in its timing, but not in its choice of chef.

Overnight, he made Under the Volcano into one of New York’s few destinations for mixiotes. A mixiote is a bundle of meat — lamb, at Under the Volcano — tied up inside some sort of wrapper with garlic and salsa and then steamed until it turns into something resembling meat salsa. When the bundles are untied, intoxicatingly aromatic clouds of vapor should waft toward the skies.

Mr. Sánchez’s mixiotes are more intoxicating than most; he sprinkles the lamb with mezcal, giving it a smokiness that in his hometown, the Mexican city of Puebla, would be achieved by cooking the parcels underground, in a fire pit.

The mezcal also supplies some of the vegetal undertones of the maguey plant from which it is distilled. This, too, is a workaround, if a temporary one. Mr. Sánchez is busy finding sources for the skin peeled from maguey leaves, the traditional wrapper in Mexico. Until he has a steady supply, he is using parchment paper instead.

Mixiotes require a side of beans. The ones at Under the Volcano are very good: soft, glistening, large black ayocotes stewed with avocado leaves. An essential herb in Mexico, avocado leaves are often skipped in New York, though not by Mr. Sánchez, whose effort at fidelity to the ways things are done where he came from is a hallmark of his cooking.

Like the mixiotes, most of the taco fillings are long-cooked meats adapted from dishes that would traditionally be cooked in the ground by a smoldering fire. There is beef birria, spiced richly but with a nuance that extends to Mr. Sánchez’s refusal to dip the tortillas in chile-tinted beef fat, the way almost every other birria dispenser in town does; lamb barbacoa, seasoned simply and elementally with roasted maguey; and cochinita pibil, the Yucatecan pork dish made with a sour twist of Seville oranges and the gnawing heat of habaneros.

These stewed meats give the tacos a juiciness that can go cascading down your arms. They also give the short menu a connecting thematic link of subterranean fire, a theme that points back to the name of the bar. Another link: “Under the Volcano” is the title of Malcolm Lowry’s woozy 1947 novel about a British consul in Mexico who is undone by his epic consumption of mezcal, a spirit that begins with agave hearts roasted in a pit oven.

All this suggests that someone in the kitchen has a literary turn of mind. That mind, in fact, belongs to Mr. Sánchez, who when he is not at the stove writes poetry in Nahuatl,

Advertisement
an Indigenous language that he learned before he could speak Spanish.

Mr. Sánchez sometimes gives Mexican cooking classes with a strong etymological motif. Chocolate, avocado, tomato, chile and huitlacoche are among the food terms that come from Nahuatl. He has worked for the Endangered Language Alliance as a Nahuatl teacher and as an instructor in a program that teaches Mexican and South American Indigenous communities in New York how to cook the strange vegetables they see in the supermarkets of their adopted city.

After the pandemic temporarily closed the Brooklyn tavern where he had been cooking burgers and Buffalo cauliflower, Mr. Sánchez supported himself by running a pop-up restaurant out of a defunct cevicheria in Queens. He called it Tlaxcal Kitchen — tlaxcal is Nahuatl for corn tortilla and the root of the word taco. Through an open window, he sold foods from Puebla that he felt were not always done justice in New York. He made tacos árabes, introduced to Puebla by Middle Eastern immigrants; tacos al pastor, which is what the tacos árabes evolved into; and cemitas, sandwiches he feels so strongly about that he would bake their sesame-seed rolls three times a day.

Word got around, and eventually reached the managers of Under the Volcano. After eating at Tlaxcal Kitchen, they approached Mr. Sánchez with the idea of importing its menu to their bar. It was his idea to tie the cooking to Lowry’s book.

Not all of Mr. Sánchez’s literary inspirations pan out. Over Valentine’s Day weekend, he cooked an Aztec recipe for quail in rose-petal sauce described by Laura Esquivel in “Like Water for Chocolate.” I liked reading about it more than eating it.

The current menu runs to about 10 items, one of which is a fairly routine guacamole. Mr. Sánchez, who ended Tlaxcal Kitchen when Under the Volcano hired him, would like to expand on that, but he needs more customers. Midtown is still eerily underpopulated, especially at night, when Under the Volcano is open. Outside are three high tables set on the sidewalk, unsheltered and unheated and unilluminated. Nothing tells you that by sitting there you could soon have a Lowry Margarita in hand, a refinement on the classic with a blend of mezcal and white rum in place of tequila; or a manhattan fresh from a relaxing rest in a barrel, or a bottled Trappist ale from Belgium.

All are fine choices, but it would be perverse to eat food cooked with mezcal, or at least with mezcal in mind, and not drink any. A copita, a one-ounce glass, lasts about as long as a taco. A less smoky variety is wonderful with a cup of the bronze lamb consomé, which has a handful of chickpeas in it. The more pungent bottles are ideal for a brothy cup of birria with warm corn tortillas to tear up and toss in.

Something right in the middle, a mezcal that tastes of cucumbers or artichokes but still carries traces of pit-roasting, is what you want for the nopal salad. Mr. Sánchez leaves the cactus raw, curing it in salt to draw off most of its transparent goo, and tosses cubes of it with cilantro, garlic and olive oil. Then he spreads it on a tostada and sprinkles it with crumbs of queso fresco. Whatever traits you associate with cooked nopales, this salad — crisp, bright, refreshing, almost peppery — is the opposite.

Like the rebirth of Under the Volcano, it suggests fresh possibilities.

What the Stars Mean Because of the pandemic, restaurants are not being given star ratings.