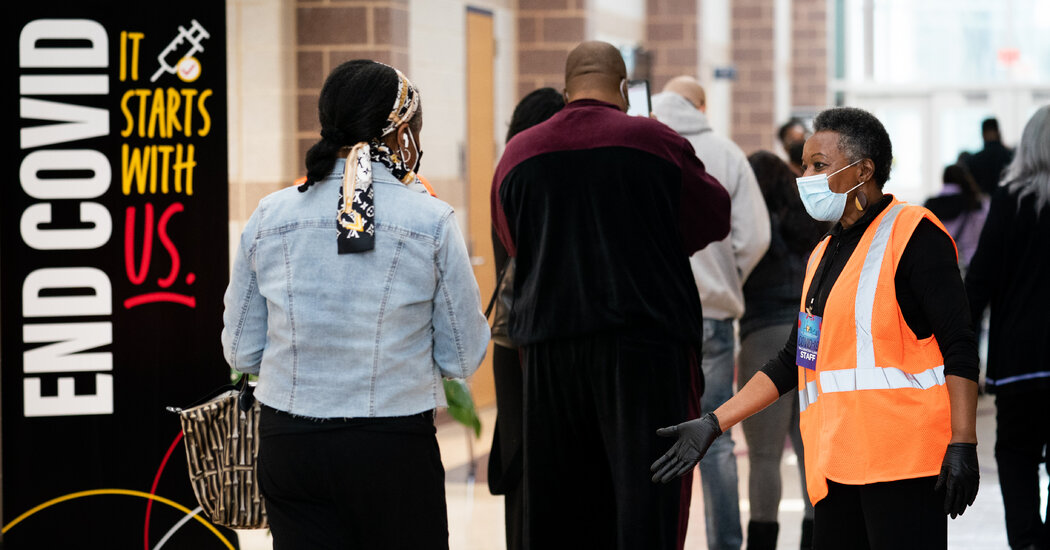 UPPER MARLBORO, Md. — The path to quickly vaccinating the nation’s 250 million adults will be paved with pharmacy chains, hospitals and hulking stadiums where uniformed troops help inoculate thousands of people a day.

But it will also rely on the recreation center at the First Baptist Church of Glenarden here, along with tiny storefront service organizations and vaccine-stocked vans that scour neighborhoods for the unprotected.

Maryland offers a microcosm of the issues states face as they rush to open enough vaccination sites to meet President Biden’s goal of making every adult eligible for Covid-19 shots by May 1. It has encountered nearly all the geographic, demographic and human behavioral challenges that come with a public health task of this scale: poor urban neighborhoods where many lack access to regular care; wealthy Washington suburbs whose residents have proved adept at vacuuming up shots meant for other ZIP codes; isolated rural areas; and a sign-up system that has so vexed the citizenry that vaccine hunting has become for many a part-time job.

“We are going to push, but we’re also going to have to pull,” said Dennis Schrader, the acting health secretary in Maryland, describing the state’s plan to not only ramp up capacity at mega-sites and pharmacies, but to “pull people in” with smaller, more targeted efforts.

Nearly every state in the nation now finds itself in a perilous race between vaccinating its residents and succumbing to an onerous wave of cases fueled partly by the emergence of new variants of the coronavirus. As states rush to expand eligibility for the shot, many are also loosening rules on dining, gathering and masks.

It will take extensive group efforts across competing interests to push states closer to herd immunity. Efforts to track who is getting vaccinated, and where, will become all the more important so that health officials can quickly identify who is being left behind, and shift their strategies and resources accordingly.

Many states have already opened vaccination to all adults, including more than a dozen this week alone. To push the process along, Mr. Biden announced a new promotional campaign Thursday aimed at communities where vaccine hesitancy remains high.

“It really is going to be the start of much more surveillance and analysis being needed to make sure that this was both a fast and a fair rollout of the largest vaccination campaign in human history,” said Alison M. Buttenheim, an associate professor at the University of Pennsylvania School of Nursing.

Here in Maryland, the pent-up demand for the vaccine is huge: only people 65 and older, some types of essential workers and a few other narrow categories were eligible until late March, leaving two-thirds of the population still unprotected.

On Tuesday, Gov. Larry Hogan, a Republican, opened up vaccination to all who are 16 and older and have certain medical conditions; by April 27, everyone 16 and older will be eligible regardless of medical status.

But while Mr. Hogan has faced stark criticism from local leaders about the state’s middle-of-the-road pace, now some people worry it is speeding up too quickly. Mr. Hogan has already been criticized for not doing enough to reach Black and Latino residents, who make up more than 40 percent of the state’s population, but only 28 percent of those who have received at least one shot.

The Hogan administration is planning to open four more mass vaccination sites by the end of April, bringing the total to 12, and has 320 pharmacies administering shots; a federally operated site will open

Advertisement
at a suburban metro station next week. Mr. Hogan’s goal is to administer 100,000 shots per day by May, up from an average of 57,000 a day now.

The state has started adding primary care doctors to the effort, with the goal of having 400 practices administering shots by May. It is also working with local health departments and community partners, particularly churches, to open “pop-up” vaccination sites aimed at populations that may be geographically or socially isolated, or distrustful of government and large institutions.

Pastor John Jenkins at the First Baptist Church of Glenarden understood the role his church could play as he drove down a main drag in Prince George’s County — a majority-Black area that has had high Covid infection rates, but low vaccine rates — past the snaking line of cars leading to a mass vaccination site at the Six Flags amusement park.

With the help of his church’s long-term partner, the University of Maryland Capital Region Health, he quickly created pop-up vaccine sites with his army of church volunteers. State officials, who were providing contract workers, came to see his sprawling indoor recreation center and quickly agreed to greatly expand on his initial dreams of several hundreds shots a week.

The site, which functions like a medical center, planned to vaccinate a few hundred people a day, but quickly got closer to 1,000 with residents like Denise Evans, who said she felt “more comfortable” at her church than at the stadium down the road. The church will soon ramp up to provide shots daily. “I am grateful the governor reallocated resources here,” Pastor Jenkins said.

Targeting smaller populations can also take special efforts. A group of Latino residents in Baltimore, who were given 25 slots at a state convention center, were often unable to reach the site, and those who got there could not find anyone who spoke Spanish. The Esperanza Center in Baltimore, a unit of Catholic Charities of Baltimore, was approached in February by the National Guard to set up a clinic for that group with Johns Hopkins at Sacred Heart of Jesus church.

“The thing that was really important to us was that they not be in uniform,” said Katherine Phillips, the center’s medical director. (Many of those who attend the church are undocumented immigrants.)

The site uses a hotline to help residents get appointments and offers shots at its church on Friday nights, when more area residents who could not otherwise leave work can get there.

Another focus of criticism in Maryland, as in many other states, has been the system for scheduling vaccine appointments. Instead of a single online portal where people can view available appointments across the state, every provider has its own online appointment system, which means people often have to look through multiple sites to find a slot. The state recently created a single online platform where residents can preregister for an appointment at any of its mass vaccination sites, but Mr. Schrader, the acting health secretary, said that the hospital systems and pharmacy chains running most sites “want to use their own system.”

Dr. Josh Sharfstein, a vice dean at the Johns Hopkins Bloomberg School of Public Health in Baltimore and a former Maryland health secretary, said he expected that approach to prove more problematic as more and more people seek appointments.

“This chaotic system where people have to go to 15 websites, it really does discriminate against people who don’t have computers or can’t spend all day doing this,” Dr. Sharfstein said.

Mr. Biden said recently that his administration would help make it easier to find vaccine appointments, including by creating a federally supported website that will show people the locations near them where shots are being given and a toll-free hotline that people can call for help finding a vaccine, both by May 1. He also promised to deploy “technology teams” to states that need help improving their vaccine appointment portals.

To date, Maryland has been sending about 30 percent of its weekly vaccine allocation to its mass sites, 30 percent to local health departments, which share with community groups and other small providers, and the rest to hospital systems, pharmacies and independent doctors’ offices.

Moving forward, Mr. Schrader said the state would rely heavily on local health departments and community health centers, which provide primary care to low-income and uninsured people at 126 locations around the state and are getting their own allocation directly from the federal government. Among other things, they will be able to compare their patient lists with the state’s vaccine registry to figure out who still needs a shot.

In Baltimore, where 21 percent of residents live below the poverty level, local hospitals, pharmacies and a nursing school have partnered with the city health department to send teams at least six times a week to public housing for the elderly, vaccinating more than 2,300 people there so far. The city will expand the program to other high-risk populations soon, said Dr. Letitia Dzirasa, the city’s health commissioner.

“It is a little nerve-racking to think a month from now it will be completely open,” Dr. Dzirasa said.

Still, she and other local officials around the state said they did not expect to have any shortage of vaccinators or sites where people could come for shots. In Washington County, where large rural swaths border Pennsylvania, Virginia and West Virginia, Maulik S. Joshi, the president and chief executive of Meritus Health, the local hospital system, said that between the county health department, the local aging commission and his own work force of nearly 3,000, he was not worried about staffing as the number of vaccine-eligible balloons.

“We’ve deployed people like you wouldn’t believe,” Dr. Joshi said as he prepared to open a mass vaccination site at an outlet mall off a highway in Hagerstown, once an outpost of cut-rate merino wool sweaters and Orange Julius, now part medical center. “People from finance and outpatient rehab care are running our vaccination sites. We’re hiring. We’re ready to go. It’s not a cost issue or a people issue for us, it’s just a vaccine issue.”