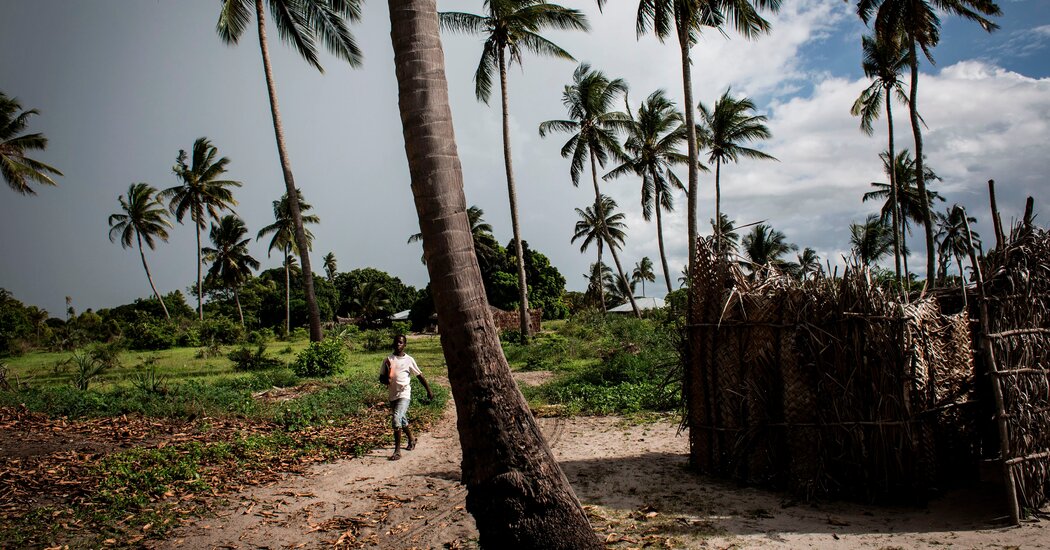 JOHANNESBURG — As gunshots rang out across a port town in northeastern Mozambique on Friday afternoon, nearly 200 people sheltering inside the Amarula Palma hotel confronted a devastating reality: The armed insurgents outside the hotel’s doors had all but taken control of the town and there was no one coming to save them any time soon.

For two days, hundreds of insurgents in the gas-rich region had been laying siege to the coastal town of Palma, firing indiscriminately at civilians, hunting down government officials and setting buildings ablaze as security forces tried in vain to repel them.

The violence sent thousands of people fleeing, with some rushing to the beach, where a ragtag fleet of cargo ships, tugboats and fishing vessels was ferrying people to safety.

But at the hotel, with daylight hours dwindling, the local residents and foreign gas workers who remained faced an impossible choice: Either wait inside, defenseless, for a promised evacuation in the morning, or try to make it to the beach.

In a desperate dash, dozens of people crammed into a 17-vehicle convoy and left the hotel for the oceanfront.

Only seven vehicles completed the trip.

Militants ambushed the convoy after it left the hotel grounds, setting on the occupants of the cars. Many arrived at the beach bloodied. Many never made it at all. American officials said 40 to 50 foreigners alone were feared dead in the attack.

By Saturday night the insurgents had completely overrun the town, leaving scores of people unaccounted for and feared dead.

“It was total chaos,” said Lionel Dyck, the founder of the South African private security company, Dyck Advisory Group, that evacuated people by helicopter. “They completely wreaked havoc, and there was no evacuation plan.”

On Sunday, an estimated 35,000 local residents who managed to flee the area arrived in nearby cities and towns, some after walking for four days carrying backpacks and plastic buckets with their belongings, according to humanitarian workers.

It is the largest single displacement of people in northern Mozambique since the insurgents overran another Indian Ocean port town in Cabo Delgado province, Mocimboa da Praia, just over 50 miles south of Palma, last year, one aid worker said.

The siege that began on Wednesday afternoon was a stunning escalation of the conflict in northeastern Mozambique by insurgent groups with ties to the Islamic State, which has made alarming inroads and sent waves of violence across the African continent in recent years.

Over the past three years, the war between militants and government security forces in Cabo Delgado province has left at least 2,000 people dead and 670,000 more displaced, in one of the region’s worst humanitarian crises.

The rapid rise of the insurgency — which has swelled from a few dozen fighters in 2017 to as many as 800 militants today — has been as shocking as the campaign of violence the militants have unleashed. Insurgents have beheaded civilians in summary executions and left homes, schools and health centers destroyed.

Many analysts say that the insurgency is a homegrown crisis and that the group only maintains loose ties to the Islamic State. Still, the jihadist rallying cry has provided a banner under which mostly impoverished people angry about an array of local grievances can coalesce. It has also inspired the use of the international terrorist network’s brutal tactics.

Few journalists and human rights investigators have been able to report firsthand on the conflict from Mozambique, where government forces and private security contractors have also been implicated in abuses against civilians. And as the attack on Palma unfolded last week, phone lines and other communications in the town were cut by insurgents.

The attack demonstrated a new level of sophistication — and boldness — by the insurgents. Their target was the base for a multibillion-dollar gas project operated by international energy companies, including the French company Total.

Should the gas project collapse, it would deal a huge blow to the Mozambique government, which has based much of its economic planning on billions of dollars in forecast revenues.

“This could be the end of the gas,” said Joseph Hanlon, a visiting senior fellow at the department of International Development at the London School of Economics who is an expert on Mozambique.

The Mozambique government guaranteed Total that it would secure the development, and Total said it would not hire private security companies like the Dyck Advisory Group, which was recently implicated in a report by Amnesty International

“This attack is arguably the most significant yet, given that foreigners also came under the cross hairs of insurgents and because Palma is the gateway to the gas megaprojects,” said Dino Mahtani, deputy director of the Africa program at the International Crisis Group, who recently visited Mozambique. “It will lead to more pressure on Mozambique for hard military responses, perhaps at the expense of other policies that should still be on the table.”

Earlier this month, the United States formally designated the insurgency, known locally as Al-Sunna wa Jama’a, as a global terrorist entity after the group became identified with the Islamic State’s Central Africa Province in 2019.

The Islamic State has not claimed responsibility for the strike in Palma.

The attack unfolded around 4 p.m. on Wednesday, when hundreds of insurgents launched a two-pronged offensive on the town, closing access roads that the military forces could have used to send reinforcements and cutting off telephone lines.

For two days, the town was engulfed in sporadic fighting between the militants and national security forces as helicopters operated by the South African private contractors flew overhead.

By Friday morning the usually serene Amarula Palma Hotel, a sprawling compound with an outdoor bar and thatched-roof awnings that caters to foreign workers from countries like South Africa and the United Kingdom, had transformed into a chaotic epicenter of the crisis. By midday insurgents had surrounded the hotel and attacked, breaching its perimeter.

Helicopters operated by the private South African security company managed to evacuate 22 people. But with both fuel supplies and the light dwindling, contractors told the roughly 180 people who remained that they would not be able to fly them out until the following morning.

Dozens of people decided to chance an escape by road in the convoy that was ambushed.

On Saturday morning, the South African-operated helicopters evacuated around 20 more people who had remained in the hotel. Several others who had escaped the town and hid in the surrounding bush were also rescued by helicopters. Some had flagged the helicopters by writing out S.O.S. messages in stones, according to Mr. Dyck.

At the same time, a convoy of at least 10 vessels sailed into the bay of Palma in an informal effort to evacuate people, according to the ship-tracking website MarineTraffic.com.

Twelve hours later, they sailed south together. Several of the ships docked at Pemba, where humanitarian workers say thousands of people who were displaced by the ambush were receiving aid on Sunday.

A passenger ferry that usually operates along the coast of neighboring Tanzania also docked in Palma on Saturday and arrived in Pemba the following day, according to ship-tracking data, satellite imagery and photographs shared on social media. Local sailors on traditional wooden sailing boats, known as dhows, also carried some displaced people to Pemba, according to humanitarian workers.

While some of the fleet’s efforts were successful, other boats that attempted to come ashore to rescue people were forced to pull back when militants opened fire with small arms and mortars, according to American officials. At least one American citizen was at the gas project site near Palma during the attack, but was safely evacuated to Pemba, according to a U.S. official.

On Sunday morning, Mozambique Special Forces units launched an operation to reclaim the town. But by Sunday night, militants still held much of Palma, including the harbor, the officials said.

One British citizen who was part of the convoy who worked at RA International, a contracting company headquartered in Dubai, was missing as of Sunday night, according to an executive at the company.

At least one South African, Adrian Nel, 40, was killed in the ambush on the convoy.

Mr. Nel had been in Palma working at his family’s construction consulting company alongside his brother Wesley Nel, 37, and their stepfather, Gregory Knox, 55, who were also caught in the ambush. The two men managed to escape to the nearby forest and hid until private security contractors evacuated them by helicopter the following morning.

“They spent the night in the bush, with Adrian’s body,” Mr. Nel’s mother, Meryl Knox, 59, said in an interview. Ms. Knox spoke with her husband on Wednesday as the attack unfolded.

“The insurgents had surrounded the hotel and there was no help from the Mozambican army,” Ms. Knox said. “These guys were just left on their own.”