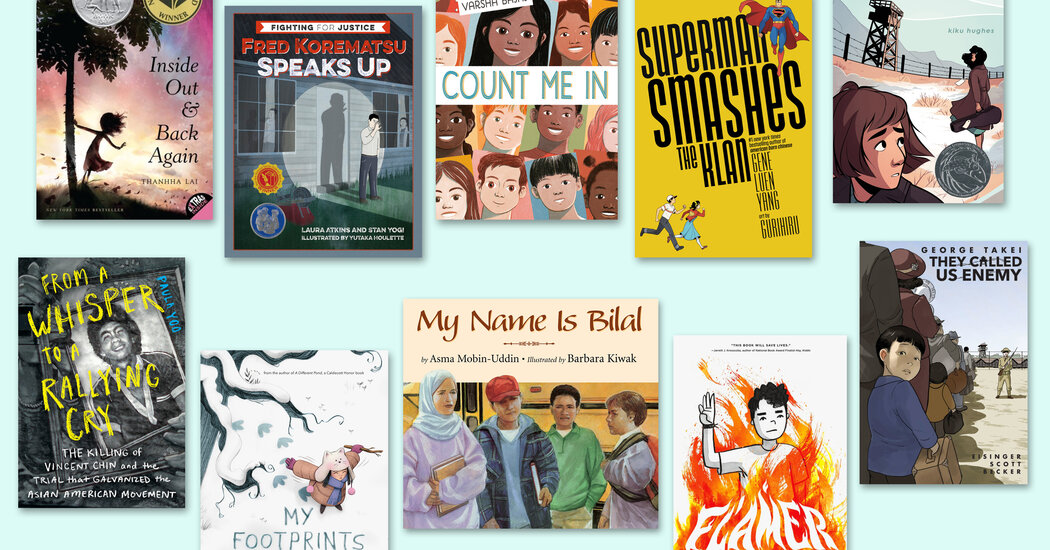 After a year with a marked increase in discrimination and harassment aimed at Asian-Americans across the country, the past few months have been particularly shocking, in both the frequency and violence of attacks.

A powerful way to fight racism is education. Conversations about prejudice with your children starting at a young age go a long way toward building empathy and acceptance, and books can be a great tool for sending important messages. This list of 10 fiction, nonfiction and comic books will help kids of all backgrounds understand and combat this wave of anti-Asian hate and bullying, and provide more context to America’s history of discrimination.

“My Footprints,” by Bao Phi; illustrated by Basia Tran
In this snowy yet colorful picture book, little Thuy uses her imagination to recover from a bullying incident at school, with help from her two mothers. Ages 4 to 7.

“My Name is Bilal,” by Asma Mobin-Uddin; illustrated by Barbara Kiwak
Bilal tries to hide his Muslim identity at his new school while his sister, Ayesha, is harassed for wearing a head scarf. A book, persuades Bilal to embrace his faith publicly and gives him the courage to stand up to the school bully. Ages 6 to 9.

“Inside Out & Back Again,” by Thanhha Lai
This novel in verse spends a year with 10-year-old Ha and her family as they flee war-torn Saigon and start a new life in Alabama. Ha weathers bullying from classmates for her appearance and limited English skills until she pushes back. Ages 9 to 12.

“Count Me In,” by Varsha Bajaj
Karina and Chris have been neighbors for years, yet their families have never spoken until Karina’s Indian-American grandfather volunteers to tutor Chris in math. When the grandfather is attacked by a stranger while walking, the students work together to heal and overcome the hate. Ages 9 to 12.

“Fred Korematsu Speaks Up,” by Laura Atkins and Stan Yogi; illustrated by Yutaka Houlette
The story of the civil rights activ ist Fred Korematsu is told in poems chronicling his experiences of racism as a child and his long fight for justice. This biography includes passages about the country’s history of discrimination, the impact it had on Japanese-Americans and resources for young activists. Ages 9 to 12.

“They Called Us Enemy,” by George Takei, Justin Eisinger and Steven Scott; illustrated by Harmony Becker
In this graphic memoir, the “Star Trek” actor and activist George Takei recounts his harrowing childhood and his family’s traumatic experience being uprooted from Los Angeles and being taken to three World War II internment camps. Ages 12 and up.

“From a Whisper to a Rallying Cry: The Killing of Vincent Chin and the Trial that Galvanized the Asian American Movement,” by Paula Yoo
In 1982, Vincent Chin was celebrating his bachelor party at a bar when an argument with two white men turned fatal. Chin’s death and the light criminal sentences his killers received incited national protests and a federal trial. Yoo’s comprehensive account sheds new light on the tragedy and its legacy. Ages 13 and up.

In this science-fiction story inspired by her family, the teenage Kiku Hughes time-travels to the 1940s and finds herself trapped in the same World War II internment camp as her grandmother. There, Kiku gets a life-altering history lesson. Ages 12 and up.

Based on a 1946 Superman radio series, two Metropolis teenagers experience racism and attacks from the Ku Klux Klan when their family moves from Chinatown to the suburbs. Ages 12 and up.

Boy Scout summer camp is fraught with anxiety for the teenager Aiden Navarro when he is bullied for his Filipino heritage, while questioning his religion and sexuality. This graphic novel is a moving story about self-discovery and survival. Ages 14 and up.