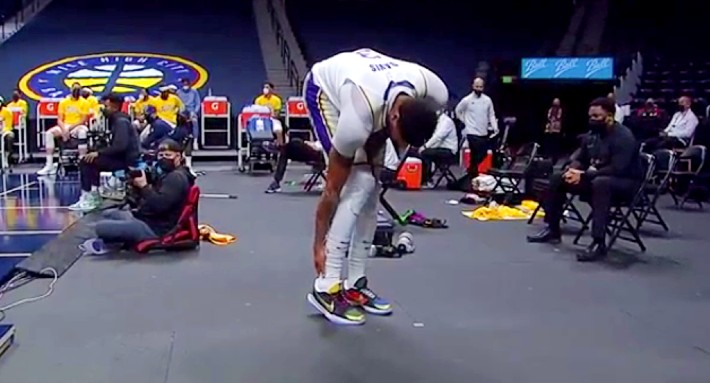 The Lakers and Nuggets met for the second time this season on Sunday night, this time in Denver, in a rematch of the 2020 Western Conference Finals.

Once again, it was a highly competitive and well-played game for the first half, but late in the second quarter attention shifted away from the action on the court and to Anthony Davis, who limped off of the court after suffering an apparent lower right leg injury on a drive against Nikola Jokic.

Jokic was called for a foul on the drive but the contact didn’t seem to be down low as the injury for Davis seemed to occur as he stepped after the contact. Davis would shoot his two free throws and immediately walk to the locker room, grasping at the back of his right ankle, which is obviously concerning given he had recently missed time with Achilles tendonosis in that same leg. Davis said recently that he was going to remain cautious with the injury, not wanting to “play” with an Achilles issue

Advertisement
which the Lakers said was not serious, as he sat out two games before returning on Friday night against the Grizzlies.
Advertisement

Hopefully, Davis just tweaked something on the play and it was more of a scare than anything serious, but until official word comes from the Lakers about his status, fans around the NBA will be holding their collective breath it isn’t a significant injury for one of the league’s top stars.

UPDATE: Davis did not return for the start of the second half, but the team had yet to provide an official update. ESPN’s Adrian Wojnarowski reported he “re-aggravated” his Achilles tendonosis and had swelling, with an MRI to come on Monday.

Lakers All-Star Anthony Davis re-aggravated his right Achilles tendonosis and there’s some swelling, source tells ESPN. He will get an MRI on Monday.