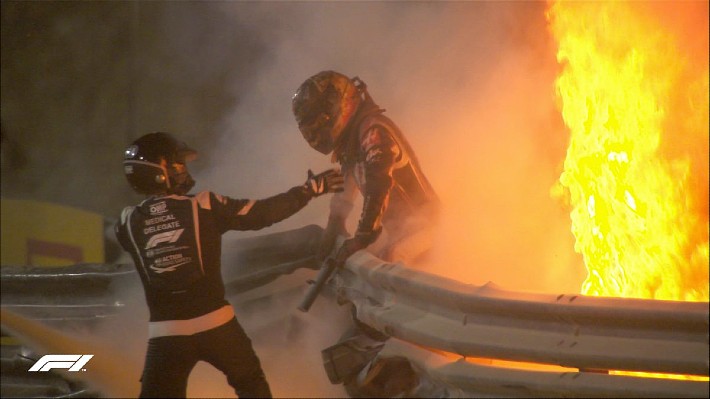 The incredible technology that goes into F1 cars makes them fast, nimble and, hopefully, safe. And that effort seems to have paid off on Sunday after a driver walked away from a fiery crash that split his car in half on the very first lap of the Bahrain Grand Prix.

Driver Roman Grosjean caused a red flag almost immediately when his car made contact with the front of one driven by Daniil Kvyat, who had slowed down because of drivers ahead of him doing the same. Grosjean’s car veered right, then barreled straight through the barriers on the side of the track, breaking in two on impact and creating a massive fireball.

This is what the crash looked like initially, with no real sign of the car except the fireball it just created when it made contact with the wall.

According to Racer, the accident happened on the opening lap of the event. Though it’s an extremely harrowing image, Grosjean was shown on camera being helped from the fireball by track officials. And though Grosjean apparently suffered some burns, amazingly no one else on the track was injured amid all the chaos.

The team subsequently confirmed that Grosjean has been transferred to a nearby hospital with a possible broken rib in addition to his light burns.

No course marshals are believed to have been injured in the incident.

Drivers tweeted their concern and relief upon hearing that Grosjean was OK.

I’m so grateful Romain is safe. Wow… the risk we take is no joke, for those of you out there that forget that we put our life on the line for this sport and for what we love to do. Thankful to the FIA for the massive strides we’ve taken for Romain to walk away from that safely https://t.co/dG8AXmsbKN

The race was also suspended 45 minutes so the course’s barriers could be repaired and, you know, the fire was put out. But amazingly, everyone managed to escape in much better shape than it initially looked on Sunday morning.