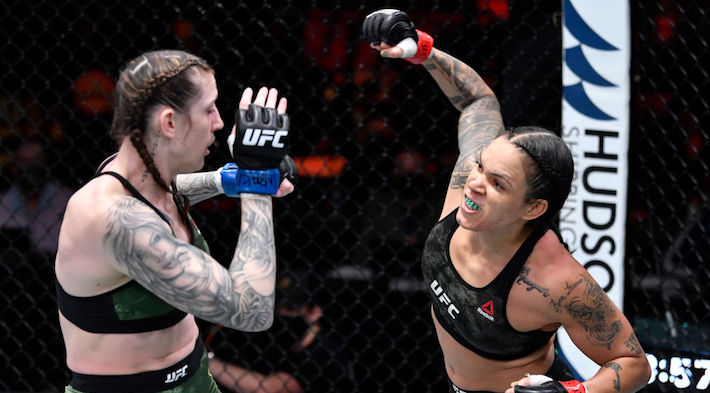 Amanda Nunes (21-4) submitted Megan Anderson (11-5) two minutes into the first round to retain the featherweight belt at UFC 259 from the UFC APEX in Las Vegas Saturday night.

Nunes hurt Anderson bad minutes into the round with a slew of overhand rights that had the challenger rocked. The champ took her to the ground, took her back and tapped Anderson with an armbar.

Untested in seven years, Nunes came into Saturday’s main event as the most dominant women’s competitor and in the running for the best all-time, bar-none. The two-division champ, Nunes has knocked off Valentina Shevchenko, Ronda Rousey, Cris Cyborg, Miesha Tate, Holly Holm, and Germaine de Randamie, leaving Anderson the most recent woman to come across her path. Nunes hadn’t competed since June 2020, and remains virtually unchallenged with her dominant effort Saturday night.

Anderson came into her title shot with two consecutive wins, earning a submission victory over Zarah Fairn, then a knockout over Norma Dumont in February 2020. But Anderson’s prior success didn’t carry over into her title opportunity.

After the bout, Nunes celebrated with her daughter Raegan, who she’s recently called a new source of motivation.

In her post-fight interview, Nunes explained to Joe Rogan she’s “here” with no real competitor in sight. She added that a lion is dangerous, but once she has a baby, “no one can stop me.”