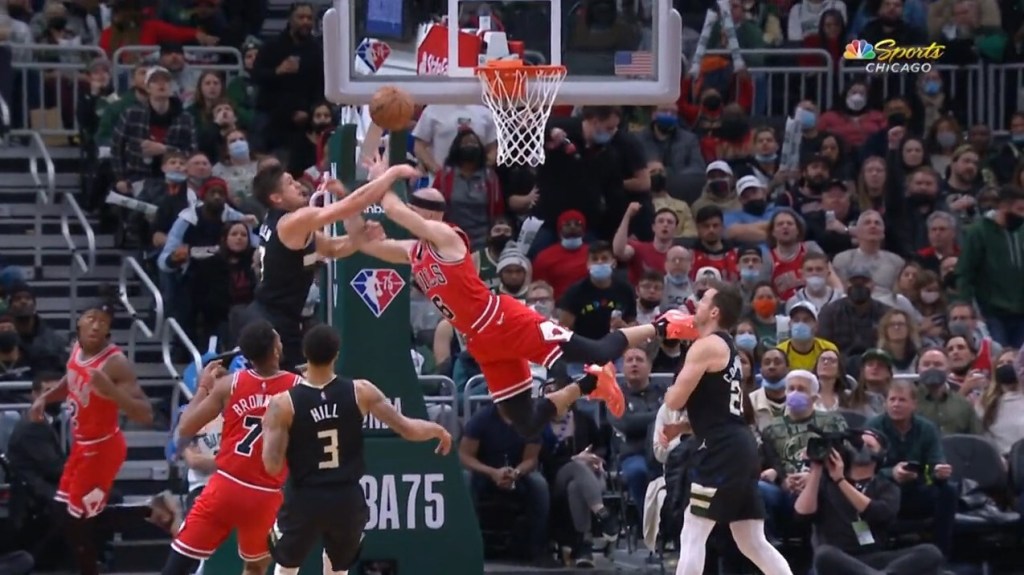 The shorthanded Chicago Bulls suffered a 94-90 loss to the Milwaukee Bucks on Friday night. After the game, Bulls guard Alex Caruso was a bit upset, and it had nothing to do with the final score.

During the third quarter, Caruso went up for a layup in transition. Bucks guard Grayson Allen was there to contest, but instead of making an effort to play the ball, Allen used two hands to commit a foul that led to Caruso landing hard on the ground. He was visibly shaken up, but was able to continue playing.

The play was reviewed and Allen was tossed from the game after being assessed a flagrant 2. After the game, Caruso did not mince his words when asked about the incident.

“Didn’t really know, really, what happened during the play,” Caruso said. “But afterwards, just looking at it, dude just grabbed me out of the air. Kind of bullsh*t, I don’t know what else you can do about it. Just glad that I didn’t have any major, major, scary injuries right away.”

Bulls coach Billy Donovan was likewise asked about the incident, and after conceding that there will be times when fouls are flagrant but not malicious, proceeded to excoriate Allen.

Billy Donovan asked about the Grayson Allen foul on Alex Caruso. Mentions losing Patrick Williams to a flagrant foul. Asks the league to take a hard look at the play. pic.twitter.com/FqWY0eQINb

“For Alex to be in the air like that, for you to take him down like that, you could have ended his career,” Donovan said. “And he has a history of this. And that, to me, it was really dangerous. I really hope the league takes a hard look at something like that, because he could have really, really, seriously hurt him. He’s dealing with his wrist right now, I don’t know what extent his wrist is. Just being there, it’s really, really dangerous to go after somebody like that.”

During Allen’s collegiate career at Duke, he became infamous for a number of incidents in which he would make some sort of unnecessary contact with opposing players. His NBA career has not had nearly as many of these kinds of moments, but it’s evident in Donovan’s comments that he’s never quite shook that reputation.