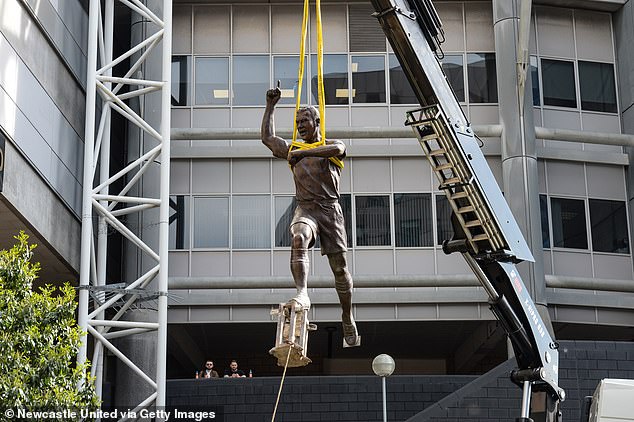 By David Coverdale For The Daily Mail

Alan Shearer thanked Newcastle United after his statue was finally moved inside the grounds of St James’ Park – six years after it was first erected.

The 10ft bronze sculpture of the club’s record goalscorer was commissioned and paid for by the family of former Toon chairman Freddy Shepherd, but then owner Mike Ashley refused to put it up within the boundaries of the stadium.

Shearer’s statue was instead placed on Barrack Road in 2016 – the council-owned land just outside St James’.

The club posted pictures of the statue being moved with the caption, ‘Where he belongs’, to which Shearer replied, ‘Thank you’

But Newcastle’s new owners pledged to relocate it after taking control of the club from Ashley last year and on Tuesday it was craned into position next to the entrance steps at the Gallowgate West corner.

The club posted pictures of the statue being moved with the caption, ‘Where he belongs’, to which Shearer replied, ‘Thank you’.

‘It’s a lovely feeling to see him where he should have been in the first place,’ said Tom Maley, who sculpted the statues of Shearer and Sir Bobby Robson, which now stand adjacent to each other.

It comes two months after the Saudi-led consortium also brought back ‘Shearer’s Bar’ at St James’ after it was rebranded ‘Nine Bar’ under Ashley, who had a long-running dispute with the club’s former striker and manager.

Speaking recently to Gary Neville on his YouTube channel The Overlap, Shearer said he didn’t know why Ashley left the statue off club land.

‘It’s not on the club’s grounds. It’s about 10 yards outside of the club for whatever reason.

‘Ask Mike, my friend Mike, ask Mike why he wouldn’t, or Lee Charnley, why they wouldn’t allow it inside the ground.’