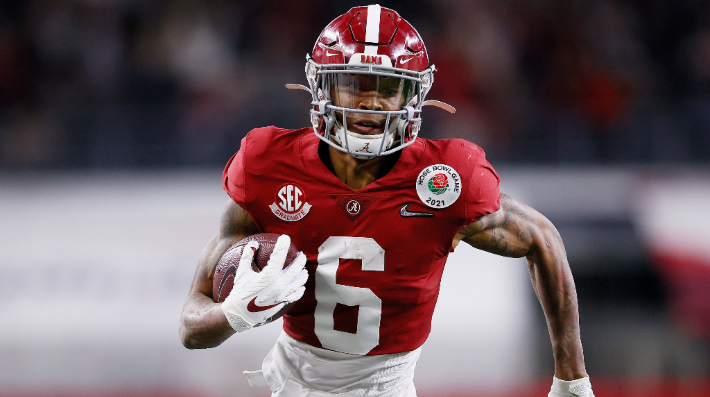 The presentation of the 2020 Heisman Trophy didn’t arrive with the normal level of pomp and circumstance, simply due to the realities of the current landscape. In fact, the award was presented virtually on a Tuesday evening and seemed to fly under the radar as a result. However, the group of finalists, featuring Alabama wide receiver DeVonta Smith, Alabama quarterback Mac Jones, Clemson quarterback Trevor Lawrence, and Florida quarterback Kyle Trask performed at a remarkably high level during a challenging season. In the end, Alabama senior wide receiver DeVonta Smith took home the coveted hardware.

Smith led the country in receptions (105), receiving yards (1,641), all-purpose yards (1,912) and receiving touchdowns (20), all while being a game-breaking weapon for the best team in the country. He certainly benefitted from having an elite quarterback in fellow Heisman finalist Jones, but the 6’1 pass-catcher was dynamic, and Smith’s impact took on even a gre ater role after fellow standout Jaylen Waddle went down with an injury in October.

In an all-time run of productivity, Smith accrued at least 144 receiving yards in seven of his last nine regular season games, with the two (relative) hiccups occurring in blowout wins that saw Alabama rest starters for extended minutes. Though the game didn’t “count” for Heisman purposes, Smith also reinforced his impact with seven catches for 130 yards and three touchdowns to help Alabama defeat Notre Dame in the College Football Semifinal.

With the win, Smith becomes the first non-quarterback since Mark Ingram in 2009, the first wide receiver to claim the Heisman Trophy since Michigan’s Desmond Howard in 1991, and only the third winner at the position in the award’s illustrious history. Now, the next step for Smith will be taking the field against Ohio State with a national title on the line and, after that game transpires later in January, he will make the jump to the NFL as a presumptive first round draft pick.