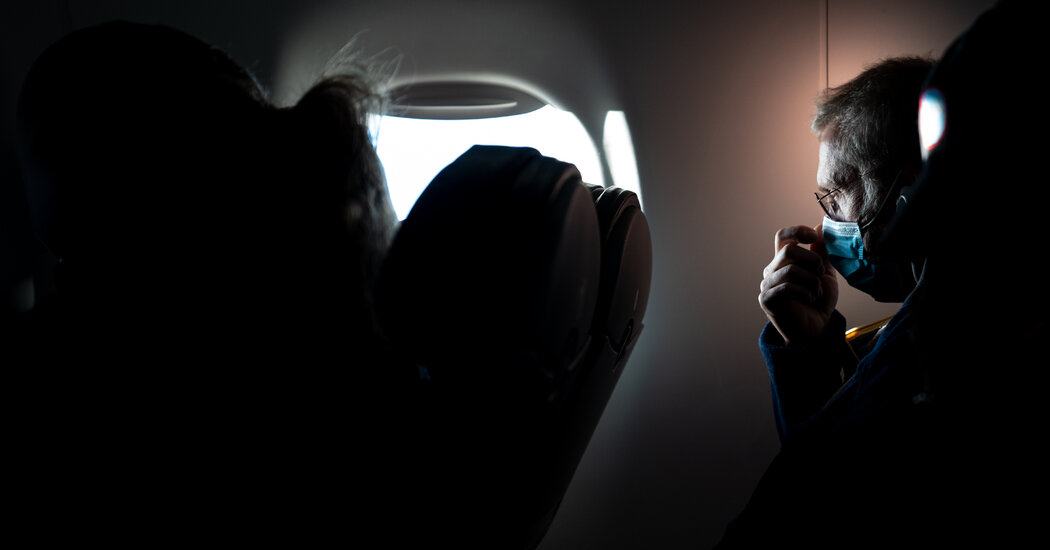 Confidence about the course of the coronavirus pandemic has helped put passengers back on planes in recent months, and Thanksgiving week is shaping up to be one of the busiest periods for U.S. air travel since it came to a near-standstill in the spring. News that effective vaccines may be close at hand lifted airline stocks.

But new concerns over the spread of the virus are rattling travelers and threatening airlines’ hopes for the months ahead.

United Airlines said Thursday that bookings had slowed and cancellations had risen in recent days because of the surge in virus cases. The Centers for Disease Control and Prevention urged Americans to avoid holiday travel altogether, presenting the industry with its latest wrenching question: How dark can this winter get?

“There’s two trains running toward us,” said John Grant, a senior analyst with OAG, an aviation data firm based near London. “One is full of optimism on a vaccine, and the other is, sadly, full of more caution. Who gets there first?”

When Angela Henry booked her Thanksgiving flights months ago, she had no idea that the United States would be setting new coronavirus infection records as the holiday approached. She also didn’t know that she would be pregnant.

Ms. Henry, 30, and her husband agonized over whether to stick to their plan to fly to Atlanta from Northern California to spend Thanksgiving with his family. After soliciting advice from loved ones and medical professionals and weighing the risks, they recently decided to go through with it.

“It’s been tough,” she said. “I was just trying to find that rational middle ground.”

Airlines argue that flying is generally safe because of the various policies put in place to limit contagion, high-end air filtration aboard planes and the relatively few published cases of coronavirus spread in flight. But the science is far from settled, travelers are still at risk throughout their journey and many would-be passengers have been discouraged by lockdowns and outbreaks in the places they hoped to visit.

Passenger volumes remain down more than 60 percent from last year, and the industry is losing the tens of millions of dollars a day.

Airlines for America, a group representing the nation’s largest carriers, said it expected more people to fly around Thanksgiving than in the weeks before or after, though it estimated that the number of seats for sale is still be down about 40 percent compared to last year. American Airlines said it expected to operate about 15 percent more flights around the holiday than in the rest of the month. Delta Air Lines said it expects to fly about 2 million passengers over the holiday period, and United expects Thanksgiving week to be the busiest one since the pandemic began, crediting measures to guard against the virus’s spread that it says have put passengers at ease.

“They see that mask compliance is really good; they’ve seen how clean the planes are; they’ve maybe even seen the electrostatic sprayers in action; they’ve seen us board the plane back to front, they’ve seen social distancing on the jet bridge — all of that has contributed to greater confidence in air travel,” said Josh Earnest, United’s chief communications officer.

Thanksgiving may improve the airline industry’s fortunes, but prospects for passenger demand in the weeks ahead are dimming. Southwest Airlines said last week that booking momentum seemed to be slowing for the rest of the year. American Airlines, which has also seen demand dip because of the virus, has slashed December flights between the United States and Europe, leaving just two daily flights out of Dallas-Fort Worth International Airport, to London and Frankfurt.

To some extent, the unevenness of the travel recovery comes as little surprise, said Helane Becker, managing director and senior airline analyst at Cowen.

“We always knew that it would be choppy, but that said, we think that people want to travel and they’re looking for ways to get out,” Ms. Becker said during a Thursday panel at the Skift Aviation Forum.

In Europe, the mood is far bleaker, with hopes of a revival over the holiday season largely dashed by the resurgence of infections and the lockdown measures reintroduced this month to curb the spread of the virus.

Ski resorts in the United States remain hopeful for winter travel, but those in France, Austria and Italy are closed until at least the end of November. Thousands of Christmas markets — which attract millions of visitors each year with mulled wine, roasted chestnuts and handmade holiday gifts — have been canceled, and Santa Claus displays have been taken online.

“Looking at the landscape across Europe now, we do not have high expectations for the winter season,” said Eric Dresin, secretary general of the European Travel Agents’ and Tour Operators’ Association. “We are in a situation where we can’t plan anything, and naturally that is crippling for the industry.”

The European Union uses a traffic light system for determining travel restrictions, labeling countries and individual regions green, amber or red, based on the rate of new infections, test rates and incidence per 100,000 inhabitants in the previous 14 days. Most member states require travelers arriving from high-risk red areas to take a coronavirus test or quarantine themselves upon arrival. At the end of last week, all European countries were labeled red, except Norway and Finland.

Travel and airline associations across Europe are calling for coordinated testing and contact tracing protocols to replace blanket quarantine measures, arguing that they cause uncertainty and confusion among travelers and have a limited effect on the spread of the virus.

Elsbeth McGawley, a restaurant manager from London, had to rush back to Britain from France in August to avoid a two-week quarantine requirement that was announced just 24 hours before it went into effect. She had six days remaining on her hotel booking, but she had to cancel because she could not afford to take time off from work because of a quarantine.

“It was a nightmare, trying to get my ticket changed and make it back in time,” she said in a telephone interview. “I just wanted a small break, a change of scene after being cooped up at home for months, but it turned into an ordeal and it wasn’t worth the hassle.”

Ms. McGawley usually books her Christmas travel to European cities a year in advance, but this year she canceled her plans and has decided to stay in Britain to avoid any last-minute disappointment.

“It’s impossible to book even now, a month in advance,” she said. “There are restrictions everywhere, and even if one place opens up, there is no way of knowing if things will stay that way. It’s a big gamble and it’s not worth the risk, because there are no guarantees that you will get a refund if things go wrong.”

Travel operators across Europe said they had seen an increase in people searching for winter holiday destinations in recent weeks, but few of those inquiries have turned into bookings because of the uncertainty about travel restrictions. The lack of such strict restrictions has kept travel flowing in the United States, but for how long is anyone’s guess.

“It’s just such a difficult situation for everyone at the moment,” said Mr. Grant of OAG, the aviation data firm. “We are all sitting here waiting to see how the next couple of weeks shake out, not just from Thanksgiving, but also likely Covid infection rates.”