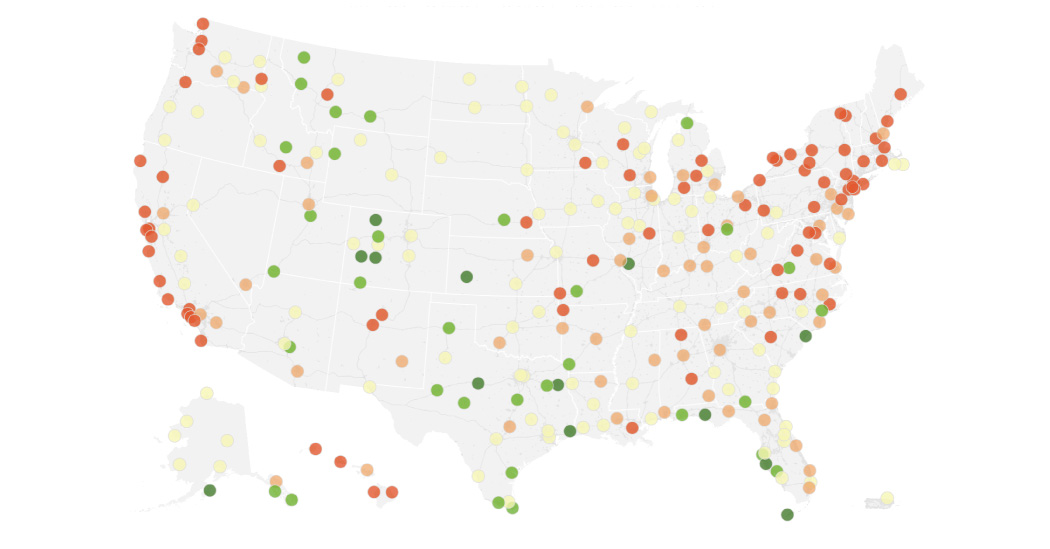 In Florida, Key West International Airport is busier than normal, while Miami International has half as many passengers as it did before the pandemic.

In the West, big-city airports — in San Francisco, Portland, Seattle — are serving a fraction of their typical traveler volume, between 24 percent and 46 percent. But smaller regional airports, near Jackson Hole, Wyo., and Colorado ski country, have passenger volume as much as 12 percent higher than this time last year.

This pattern is typical across the country, detailed new data shows. Large hub airports have just a fraction of the travelers they did at this time last year, even as Americans are returning to flying, particularly to vacation destinations.

“You see airports in Colorado, Montana, Key West having recovered quite a lot,” said Kevin Williams, a Yale economist who studies air travel data. “And then you have a lot of major cities that are still down quite a lot.”

He has compiled granular Transportation Security Administration data that tracks how many people move through airport screening checkpoints. It shows that, with millions being vaccinated daily and states rolling back pandemic restrictions, Americans are returning to leisure travel in large numbers.

But airports that serve major cities are still serving far fewer travelers than they did early last year. Washington National, close to the District of Columbia, is down 70 percent in passenger volume. San Francisco International is serving a quarter of its typical volume, and Kennedy Airport in New York is at about one-third.

This may reflect in part the slower return of business travel. These hub airports also tend to have many international flights, which are expected to take longer to recover. Additionally, many urban attractions for leisure travelers — Broadway theaters in New York City, the Smithsonian museums in Washington — remain closed because of the pandemic.

A few dozen smaller airports, where travel is thriving in spite of growing coronavirus case numbers nationally, appear to fall into two categories: those especially close to outdoor vacation destinations, and those serving communities whose residents are more willing to travel amid a pandemic.

“The only thing that is different is the masks,” said Richard Strickland, airport director at Key West International, who has flown five times in the last five months. “We’re now busier than we were in 2019.”

Idaho Falls Regional Airport is about two hours from Yellowstone National Park, which attracted many visitors last year. The airport’s passenger volume is now 80 percent of what it was last year — a stronger recovery than at the state’s largest airport, in Boise, which is at roughly 60 percent of its regular travel volume.

Two other airports that serve Yellowstone, one in Wyoming and another in Montana, were fully back to prepandemic travel volume in early March.

“For late summer and through the fall, we were seeing close to the same numbers that we’d had in 2019,” said Rick Cloutier, executive director of the Idaho Falls airport. “We were fortunate recipients of the people’s desire to get to the great outdoors.”

Passenger volume has returned to normal at Canyonlands Field airport in Utah, near Arches National Park. On Florida’s Gulf Coast, airports near beaches are having a similarly good year. There were 24 percent more passengers passing through Northwest Florida Beaches airport in early March than around that time last year.

Airports in one outdoors vacation destination have remained notably empty, though: Hawaii’s airports are down between 51 percent and 84 percent in passenger volume. The state, which has had relatively few Covid cases, requires visitors to obtain a negative test within three days before travel or to quarantine for 10 days upon arrival, making travel there more complicated. The longer time spent on a flight may also scare away potential passengers.

Willingness to travel by airplane may also vary from one city to another. Americans have reacted differently to strategies to minimize the pandemic’s spread, wearing masks and restricting time outside the house to varying levels.

“We seem to have been filling up when everybody else isn’t,” said Steve Gleason, executive director of Provo Municipal Airport. His airport is small — usually just about four or so flights a day — but busy. It’s not especially close to any national park.

Passenger traffic is down 2 percent compared with last year, while Salt Lake City International, an hour away, is still down 40 percent. Mr. Gleason says most of the rebound has to do with passengers traveling to see family through the pandemic or to students who attend Brigham Young University, which is holding in-person classes this semester.

“Most of our traffic is family traffic; they just kept flying,” he said. “It seems like everything shut down pretty solidly for two or three months, and then everybody picked back up again.”