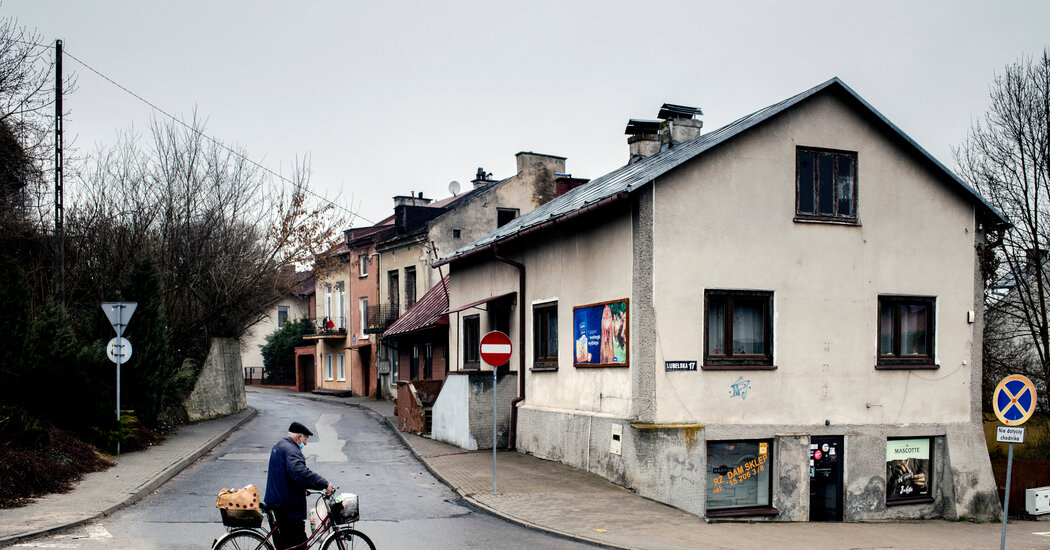 KRASNIK, Poland — When local councilors adopted a resolution two years ago declaring their small town in southeastern Poland “free of L.G.B.T.,” the mayor didn’t see much harm in what appeared to be a symbolic and legally pointless gesture.

What initially seemed a cost-free sop to conservatives in the rural and religiously devout Polish borderlands next to Ukraine, the May 2019 decision has become a costly embarrassment for the town of Krasnik. It has jeopardized millions of dollars in foreign funding and, Mayor Wojciech Wilk said, turned “our town into a synonym for homophobia,” which he insisted was not accurate.

A French town last year severed a partnership with Krasnik in protest. And Norway, from which the mayor had hoped to get nearly $10 million starting this year to finance development projects, said in September that it would not give grants to any Polish town that declares itself “free of L.G.B.T.”

“We have become Europe’s laughingstock, and it’s the citizens not the local politicians who’ve suffered most,” lamented Mr. Wilk, who is now lobbying councilors to repeal the resolution that put the town’s 32,000 residents in the middle of a raucous debate over traditional and modern values. The situation also illustrates the real-life consequences of political posturing in the trenches of Europe’s culture wars.

When Krasnik declared itself “free of L.G.B.T.,” it was joining dozens of other towns in the region that had adopted similar measures with strong support from Poland’s governing right-wing Law and Justice party and the Roman Catholic Church.

The declarations, part of the party’s efforts to rally its base before a presidential election in 2020, did not bar gay people from entering or threaten expulsion for those already present. Instead they vowed to keep out “L.G.B.T. ideology,” a term used by conservatives to describe ideas and lifestyles they view as threatening to Polish tradition and Christian values.

Cezary Nieradko, a 22-year-old student who describes himself as Krasnik’s “only open gay,” dismissed the term “L.G.B.T. ideology” as a smoke screen for homophobia. He recalled how, after the town adopted its resolution, his local pharmacist refused to fill his prescription for a heart drug.

Mr. Nieradko recently moved to the nearby city of Lublin, where the regional council has also adopted a “free of L.G.B.T.” resolution but whose residents, he said, are generally more open-minded.

Jan Albiniak, the Krasnik councilor who drafted the resolution, said that he had nothing personally against gay people, whom he described as “friends and colleagues,” and that he wanted to contain ideas that “disturb the normal, regular way our society was functioning.”

He said he had drafted the resolution after watching an online video of abortion rights activists screaming at Christian men in Argentina. Although that had nothing to do with L.G.B.T. issues or Poland, Mr. Albiniak said the video showed that “we are dealing with some sort of evil here and can see manifestations of demonic behavior” around the world that “must be stopped.”

In response to a rash of anti-L.G.B.T. resolutions across Poland’s heartland, the European Union, of which Poland is a member, as well as Norway and Iceland, have said they will cut funding to any Polish town that violates Europe’s commitment to tolerance and equality.

The European Parliament also passed a resolution last month declaring all 27 countries in the bloc an L.G.B.T. “Freedom Zone,” although like the Polish resolutions declaring the opposite, the declaration has no legal force.

All the posturing, however, has begun to have concrete consequences.

Krasnik’s mayor said he worried that unless his town’s “free of L.G.B.T.” status is rescinded, he has little chance of securing foreign funds to finance electric buses and youth programs, which he said are particularly important because young people keep leaving.

“My position is clear: I want this resolution repealed,” he said, “because it’s harmful for the town and its inhabitants.”

That will be an uphill struggle.

Faced with the loss of foreign grants, several other Polish towns that declared themselves “free of L.G.B.T.” or adopted a “family charter” trumpeting traditional values have in recent months changed their mind. But the 21-member council in Krasnik, having voted last year against repeal, recently rejected an appeal by the mayor for another vote.

Only one member has openly voiced a readiness to change sides. “I made a mistake,” said Pawel Kurek, who abstained on the original vote but now says the resolution was foolish and should be rescinded.

On a national level, Jaroslaw Kaczynski, the chairman of Law and Justice, told the newspaper Gazeta Polska last week that Poland must resist L.G.B.T ideas that are “weakening the West” and “against all common sense.”

Underlying the stalemate in Krasnik are the political and demographic realities in a region where many young people have left to find work abroad or in Warsaw, the capital, and where the Catholic Church remains a powerful force.

While many older people like their town being “free of L.G.B.T.,” young people who have remained are appalled. Amanda Wojcicka, a 24-year-old convenience store worker, said the idea was embarrassing.

But Jan Chamara, a 73-year-old former construction worker, said he would rather live on a diet of just potatoes than give into economic pressure from outside to repeal the resolution. “I don’t want their money,” said Mr. Chamara, who said he had never seen gay people in Krasnik but still felt precautions were necessary. “We will survive.”

Krasnik has acquired such notoriety that a French minister responsible for European affairs said he wanted to visit the town recently to show his opposition to discrimination during an official visit to Poland. The official, Clément Beaune, who is gay, called off the visit to Krasnik after what he described as pressure from Polish officials not to go, a claim that Poland’s foreign ministry said was untrue.

When Krasnik and other towns adopted “free of L.G.B.T.” resolutions in early 2019, few people paid attention to what was widely seen as a political stunt by a governing party that delights in offending its foes’ “political correctness.”

But that changed early last year when Bartosz Staszewski, an L.G.B.T. activist from Warsaw began visiting towns that had vowed to banish “L.G.B.T. ideology.” Mr. Staszewski, a documentary filmmaker, took with him an official-looking yellow sign on which was written in four languages: “L.G.B.T.-FREE ZONE.” He put the fake sign next to each town’s real sign, taking photographs that he posted on social media.

The action, which he called “performance art,” provoked outrage across Europe as it put a spotlight on what Mr. Staszewski described in an interview in Warsaw as a push by conservatives to “turn basic human rights into an ideology.”

Prime Minister Mateusz Morawiecki has accused Mr. Staszewski of generating a fake scandal over “no-go zones” that don’t exist. Several towns, supported by a right-wing outfit partly funded by the government, have filed defamation suits against the activist over his representation of bans on “ideology” as barring L.G.B.T. people.

But even those who support the measures often seem confused about what it is that they want excluded.

Asked on television whether the region surrounding Krasnik would become Poland’s first L.G.B.T.-free zone, Elzbieta Kruk, a prominent Law and Justice politician, said, “I think Poland is going to be the first area free of L.G.B.T.” She later reversed herself and said the target was “L.G.B.T. ideology.”

For Mr. Wilk, Krasnik’s mayor, the semantic squabbling is a sign that it is time to drop attempts to make the town “free” of anyone or anything.

But Mr. Albiniak, the initiator of the resolution, vowed to resist what he denounced as blackmail by foreigners threatening to withhold funds.