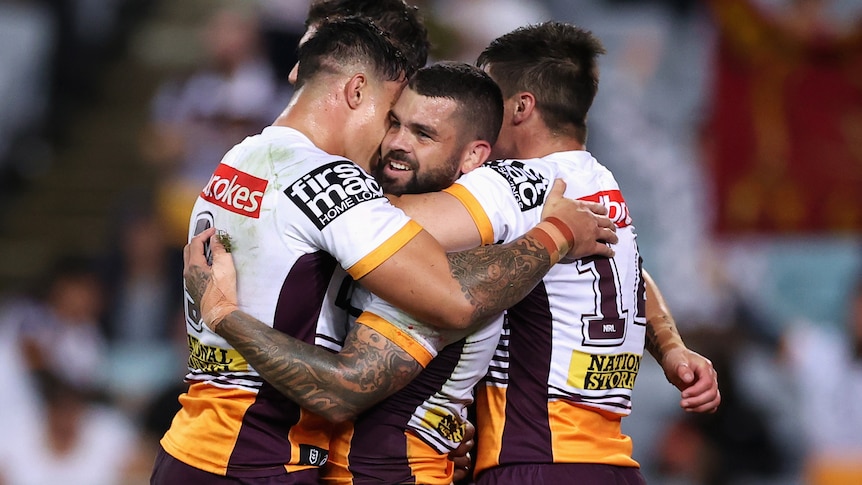 The Brisbane Broncos have stormed past South Sydney 32-12, with Adam Reynolds playing a starring role in sinking his former team.

The Rabbitohs looked out of sorts at the Olympic stadium, but that was thanks in no small part to the Broncos’ performance.

Having upset the rising Sharks last week, the Broncos rattled Souths with their defence and flashed some slick attack with their powerful outside backs, which is becoming a regular occurrence for the Queensland side.

A lot was made of Reynolds coming up against his former teammates for the first time and he was seen jawing at former Bronco Jai Arrow, who could clearly be seen saying “f*** you, bitch”, albeit with a hint of a smile.

Reynolds had his hands on everything early in the game, but it was with his boot that he struck the first blow, kicking high for winger Corey Oates to soar over fullback Blake Taafe, take the mark and touch down.

Souths kept firing shots but Taane Milne, Cameron Murray and Jai Arrow were all denied by elite Broncos defence with the line at their mercy.

Then came the moment Reynolds was surely dreaming of and hoping for all week, when Tom Flegler and Pat Carrigan strung together two slick offloads, with the halfback scurrying through the middle and stepping past Taafe to score under the posts.

A series of mistakes from the Broncos and back-to-back-to-back sets for the Rabbitohs eventually bore fruit for the hosts, with a set play from the scrumbase sending Milne over in the right corner with three minutes left in the half.

After repelling another few attacking raids from Souths, the Broncos went down the other end and scored again, with Reynolds again sending a bomb at Taafe, who fumbled, as did centre Isaiah Tass, allowing Selwyn Cobbo to pick up the crumbs and score.

Souths sent Milne over again soon after, but Tevita Tatola knocked on off the kick-off and the Broncos made it an eight-point game with a penalty goal off the ensuing set heading into the final 20 minutes.

Then came the body blow from Brisbane, packing a scrum 37 metres from the tryline, the Broncos swept left and Reynolds sent Oates through the line, with the winger popping a pass to Herbie Farnworth, who stepped back in-field to touch down.

Cobbo ended a good night for the Broncos with a length-of-the-field try, swooping on another wayward South Sydney pass and shaking off Alex Johnston before flashing a clean pair of heels and flying to the tryline.