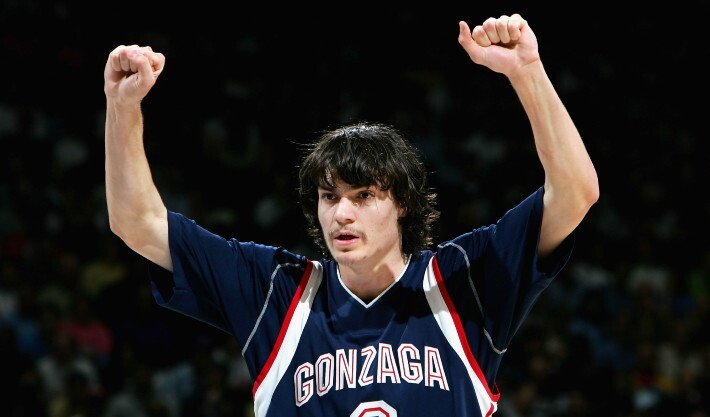 Gonzaga has built one of the great powerhouses in college basketball over the past two decades, but even as some of their stars have gone on to great success in the NBA, like Kelly Olynyk, Rui Hachimura, and Domantas Sabonis, no one is more synonymous with the Zags for fans of a certain age than Adam Morrison — although Hall of Famer John Stockton might be that guy for an older crowd.

Morrison brought Gonzaga back to the national stage in the early 2000s and while his NBA career didn’t pan out as hoped — he did pick up a couple rings on the Lakers — he will forever be remembered for his play at Gonzaga, with that iconic ‘stache and hair. One of the lasting images of Morrison is him seated on the floor in tears after the Zags lost a stunner to UCLA in the 2006 Sweet 16. That image was very popular on Twitter over the last week, as the Bulldogs were set to face the Bruins in the Final Four, and this time, they were the ones able to send UCLA to heartbreak city.

Jalen Suggs’ banked in heave at the buzzer will go down in NCAA Tournament lore, and it sent everyone into a frenzy. Jim Nantz and Bill Raftery delivered an all-time great call

Advertisement
, while NBA stars went nuts on Twitter, but on the IMG Radio call for Gonzaga, none other than Morrison was on the mic, and fittingly he got to scream “YES! YES! YES!” seeing his beloved Zags exact some revenge 15 years later.
Advertisement

Morrison knows a thing or two about showing some “MAJOR ONIONS!” as Raftery called it, as he’s had some banked in heroics of his own, with Raft on the mic to deliver one of his most iconic calls.

It’s a really cool full circle moment for Morrison, a man who was critical in launching this Gonzaga run as the best mid-major in the country — and now just a full-on powerhouse — and you can hear how much this meant to him being in the building for some karmic justice.