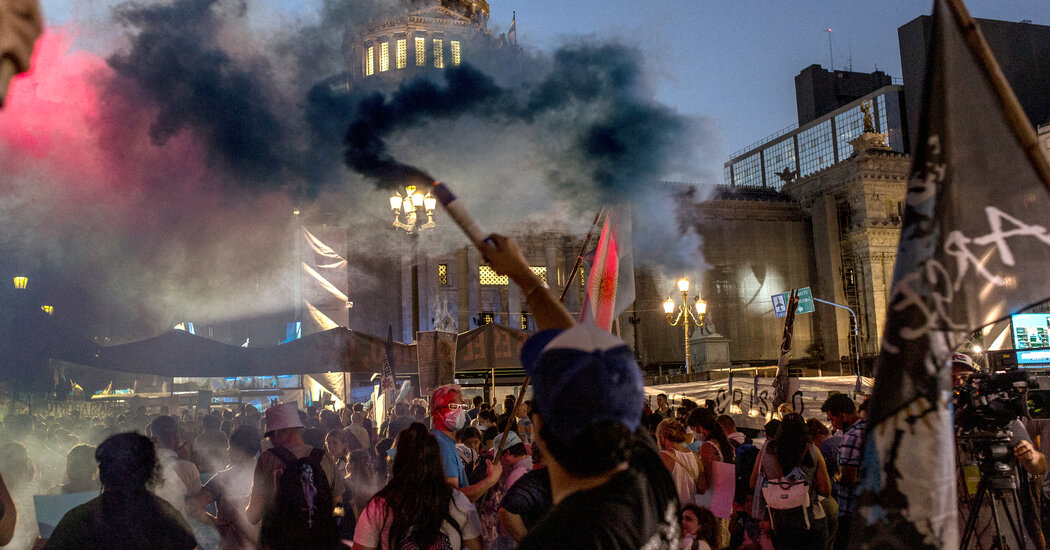 BUENOS AIRES — For the first time in more than a century, women in Argentina can legally get an abortion, but that landmark shift in law may do them little good at hospitals like the one in northern Jujuy Province where all but one obstetrician have a simple response: No.

Abortion opponents are reeling after a measure legalizing the procedure was signed into law in December, but they have hardly given up. They have filed lawsuits arguing that the new law is unconstitutional. And they have made sure doctors know that they can refuse to terminate pregnancies, a message that is being embraced by many in rural areas.

“The law is already a reality, but that doesn’t mean we have to stay still,” said Dr. Gloria Abán, a general practitioner and abortion opponent who travels the remote Calchaquí Valleys of Salta Province to see patients. “We must be proactive.”

In neighboring Jujuy, 29 of the 30 obstetricians at the Hector Quintana Maternity and Children’s hospital have declared themselves conscientious objectors, as the law allows. So have all but a handful of the 120 gynecologists in the province, said Dr. Rubén Véliz, head of the obstetrics department at Hector Quintana.

“We’re really standing in the eye of the hurricane,” he said.

Argentina’s abortion law represented a big shift for reproductive rights in Latin America, which has among the strictest such laws in the world, galvanizing movements to expand access to safe abortion in Colombia, Mexico and Chile.

But even officials in President Alberto Fernández’s administration, which introduced the bill, acknowledge that hard work remains to ensure that women are able to gain access to the procedure. “Activists will have to play a key role,” Elizabeth Gómez Alcorta, Argentina’s minister of women, gender and diversity, said in an interview.

The law, which went into effect on Jan. 24, allows pregnancies to be terminated in the first 14 weeks. Before then, abortion, which was outlawed when Argentina adopted its first criminal code in 1886, was legal only in cases of rape or if the pregnancy posed a threat to the mother’s health.

In recent days, anti-abortion activists — who battled unsuccessfully as lawmakers debated the measure — have turned to the courts, filing lawsuits in at least 10 provinces seeking to have the new law declared unconstitutional.

They won an early skirmish in the northern province of Chaco, where a judge issued a preliminary injunction blocking the law from taking effect late last month. But abortion rights activists expect to prevail in the courts.

“It was expected that some sectors would make the decision to go to judges to try to block the law,” said Vilma Ibarra, the president’s legal secretary, who wrote the abortion bill and played a key role in its passage.

It is also expected, she said, that one of the cases will make it to the Supreme Court, and it will uphold the law: “We have no doubt.”

But the courts are not the biggest hurdle.

The law faces widespread opposition among doctors in rural areas, particularly in northern provinces where Catholic and evangelical churches have considerable influence.

“In my hospital, around 90 percent of health care professionals are conscientious objectors,” said Dr. Mirta Gisela Reynaga, a gynecologist in Tucumán province who is an anti-abortion activist.

Abortion rights activists say that officials at the federal and state level have been slow to draw up plans to put the new law into effect, especially in conservative areas. That, they say, has given their opponents the upper hand.

“Those who are against this law are much quicker than the ministry, and they’re pressuring people to sign up as conscientious objectors,” said Dr. Cecilia Ousset, a gynecologist in Tucumán, a conservative province known for restrictive policies on terminating pregnancies.

Dr. Ousset became embroiled in Argentina’s abortion wars in 2019 after helping an 11-year-old girl who was raped but was denied an abortion

Officials say the opposition by doctors will have limited impact because the vast majority of abortions within the first 14 weeks of pregnancy are carried out with pills and do not require a medical procedure. Even when a procedure is needed, they said, there will be ways to work around roadblocks.

“The practice is guaranteed, because if a certain hospital does not have professionals who are not conscientious objectors we will transfer the patient,” said Dr. Claudia Castro, who leads the women’s health department in the maternity and infancy division of Jujuy’s Health Ministry.

In rural areas, though, it may be difficult for women to ask for help in the first place.

“It’s one of many popular beliefs that are in the collective imagination,” said Ms. Lerma, who belongs to an abortion rights coalition of health care providers.

Recently, Ms. Lerma said, a woman in her early 20s came to see her and said she was terrified about the prospect of having an abortion because a gynecologist had told her it would cause cancer.

As they work to improve access to abortion in rural areas, activists are also seeking to expunge the criminal records of hundreds of women who were charged with crimes related to abortion in recent years. The Center for Legal and Social Studies, a human rights group that campaigned in favor of legalizing abortion, said that from 2012 to 2020, there were more than 1,500 prosecutions directly related to abortion and 37 for “obstetric events,” which typically refers to miscarriages.

The first category may be easier to handle. Since abortion is now allowed, any pending cases may be thrown out, though “this won’t be so automatic,” said Diego Morales, a lawyer with the legal center.

Activists want to ensure that even cases that did not lead to convictions are expunged.

“Convictions are very low, but the criminal process operates as punishment due to the stigma,” said Soledad Deza, a lawyer in Tucumán who has represented many women accused of having abortions.

The bigger challenge are charges involving so-called obstetric events, filed after women report late-term miscarriages or stillbirths. Some prosecutors have treated such cases as murders.

Victoria Tesoriero, a senior official at the Interior Ministry, said this was part of a strategy by the “misogynistic” judicial system to “hide the situation” that women were effectively being prosecuted for miscarriages.

Natalia Saralegui Ferrante, a law professor at the University of Buenos Aires, was the co-author of a book published last year that brought to light how common such prosecutions had become. Sometimes, she said, the women said they had not even known they were pregnant — “but nobody believed them.”

One woman, Rosalía Reyes, was placed under house arrest after being sentenced to eight years. She says she suffered a miscarriage when she was seven months pregnant.

As a mother of four, the judges reasoned, Ms. Reyes should have known how to cut the umbilical cord, even though she lost so much blood she fainted, said her lawyer, Fabiana Vannini.

Ms. Vannini hopes she may now have a way to reopen the case. The new law, she argues, does more than just legalize abortion.

“It also changes the paradigm of what is a woman, and who has control over her body, her uterus,” the lawyer said.