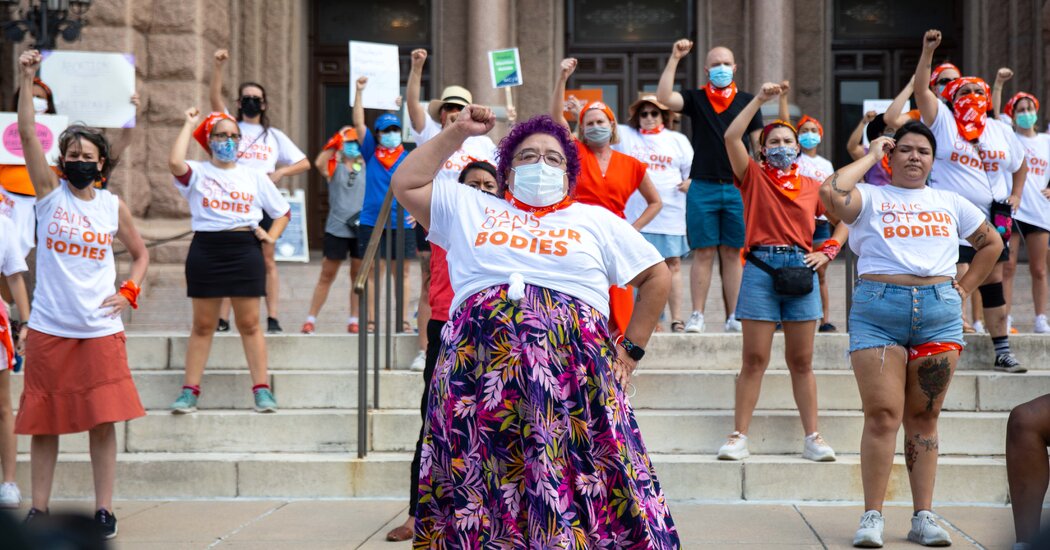 WASHINGTON — The Supreme Court’s decision not to block a Texas law sharply curtailing abortions abruptly vaulted the issue to the forefront of American politics on Thursday, reshaping the dynamics of elections in California this month, in Virginia in November and in midterms next year that will determine control of Congress and statehouses.

Republicans hailed the court’s 5-to-4 decision, explained in a one-paragraph middle-of-the-night ruling, as a tremendous victory, allowing a nearly complete ban on abortions to stand in the nation’s second-largest state.

For Democrats, it was a nightmare come true: A conservative Supreme Court, led by three appointees of former President Donald J. Trump, had allowed a highly gerrymandered, Republican-controlled state legislature to circumvent Roe v. Wade, the half-century-old decision that enshrined abortion as a constitutional right.

Suddenly, supporters of abortion rights found themselves grappling not only with the political and policy failures that had led to this point, but also with the prospect that other Republican-controlled legislatures could quickly enact copycat legislation. On Thursday, G.O.P. lawmakers in Arkansas, Florida and South Dakota promised to do so in their next legislative sessions.

Yet Democrats also embraced the opportunity to force an issue they believe is a political winner for them to the center of the national debate. After years of playing defense, Democrats say the Texas law will test whether the reality of a practical ban on abortions can motivate voters to support them.

Senator Catherine Cortez Masto of Nevada, a Democrat up for re-election in 2022, said people in her state had fought to protect women’s reproductive freedom and would vote accordingly. “If a Republican is going to go to Washington to roll those freedoms back, I will make it an issue,” she said in an interview. “I don’t think you should underestimate the impact that this issue has to Nevadans.”

Republicans held up the Texas law as an example for the country to follow. “This law will save the lives of thousands of unborn babies in Texas and become a national model,” said Lt. Gov. Dan Patrick of Texas. “I pray that every other state will follow our lead in defense of life.”

Gov. Kristi Noem of South Dakota, who is considered a potential Republican candidate for president in 2024, said she had directed her office to “make sure we have the strongest pro-life laws on the books.”

The court’s decision, which did not address the substance of the Texas law, creates new urgency for President Biden and congressional Democrats to do more than issue public statements vowing to defend women’s reproductive rights.

“The temperature just got a lot hotter on this issue, and I certainly now expect Congress to join in these fights,” said Gov. Michelle Lujan Grisham of New Mexico, the chairwoman of the Democratic Governors Association. “Our voters expect us all to do more.”

Yet Senate Democrats do not have the votes to eliminate the filibuster, which would be necessary to change federal abortion law in the evenly divided chamber.

In Washington on Thursday, Democratic leaders dutifully scrambled to show their determination to push back against the possibility that the Texas law could be replicated elsewhere — or to respond if the Supreme Court rolls back abortion rights when it rules on a Mississippi law that seeks to ban most abortions after 15 weeks of pregnancy, two months earlier than Roe and subsequent decisions allow.

Speaker Nancy Pelosi promised to bring a vote on the Women’s Health Protection Act, which would effectively codify abortion rights into federal law.

And Mr. Biden pledged “a whole-of-government effort” in response to the Texas law, directing the Department of Health and Human Services and the Justice Department to identify possible federal measures to help ensure that women in the state have access to safe and legal abortions.

“The highest court of our land will allow millions of women in Texas in need of critical reproductive care to suffer while courts sift through procedural complexities,” Mr. Biden said. “The impact of last night’s decision will be immediate and requires an immediate response.”

Vice President Kamala Harris added, “We will not stand by and allow our nation to go back to the days of back-alley abortions.”

The first election that could test Democrats’ capacity to energize voters over abortion rights comes on Sept. 14 in California, where voters will determine the fate of Gov. Gavin Newsom, who faces a recall effort. Mr. Newsom warned on Twitter that the Texas abortion ban “could be the future of CA” if the recall were successful.

In Virginia, Democratic candidates for the state’s three statewide offices and House of Delegates pounced on the issue on Thursday. Former Gov. Terry McAuliffe, who is running to recapture the office in November, said the fight for abortion rights would help motivate Democratic voters who might be complacent after the party captured full control of state government in 2019 and helped Mr. Biden win the state last year.

“We are a Democratic state. There are more Democrats,” Mr. McAuliffe said. “But this is an off-off-year, and getting Democrats motivated to come out, that’s always the big challenge.”

Eyeing 2022, the Democrats’ Senate campaign arm has signaled it will use abortion rights as a cudgel against Republicans running in states like Florida, New Hampshire, Nevada and North Carolina. Democrats planning campaigns for governor next year are preparing to brand themselves as the last line of defense on abortion rights, particularly in states with Republican-controlled legislatures.

“People are now waking up to the fact that the battle will now be in the states, and they recognize that the only thing, literally the only thing standing in the way of Pennsylvania passing the same ban that Texas just passed, is the veto pen of our Democratic governor,” said Josh Shapiro, the Pennsylvania attorney general, a Democrat who has said he expects to enter the race to succeed Gov. Tom Wolf. “I’ve given up on the politicians in Washington. I don’t think we can count on them anymore.”

Though Republicans have long made overturning Roe a central political goal — as a candidate in 2016, Mr. Trump predicted that his eventual Supreme Court appointees would do so — there was still a palpable sense of shock among Democrats. Despite the court’s 6-to-3 conservative majority, many Democrats seemed mentally unprepared for Wednesday’s ruling.

“You can’t plan for a blatantly false or unconstitutional court ruling like this,” said Representative Conor Lamb of Pennsylvania, a Democrat who is running for his state’s open Senate seat next year.

Citizens, not the state, will enforce the law. The law effectively deputizes ordinary citizens — including those from outside Texas — allowing them to sue clinics and others who violate the law. It awards them at least $10,000 per illegal abortion if they are successful.

Senator Kirsten Gillibrand of New York, who made women’s rights the centerpiece of her 2020 presidential campaign, said Democrats could no longer be squeamish about fighting for abortion rights. “We have to elevate the issue,” she said Thursday. “We need to explain to the American people that this Texas law and other laws that will be attempted to be passed in other states, will upend women’s basic health care.”

More broadly, progressive advocates lamented Democrats’ failure to match Republicans who have spent generations entrenching themselves in state capitals and placing enormous emphasis on appointing conservatives to the bench — key arenas where Democrats have failed to protect abortion rights.

“We’re playing 50 years of catch-up,” said Ben Jealous, a former N.A.A.C.P. chief executive who is now the president of People for the American Way, a progressive organization. “The court is out of step with the American people. And Republicans have made the Supreme Court their sea wall against democracy.”

Even as they exulted, anti-abortion conservatives worried about pitfalls ahead. They recalled Todd Akin, a former Missouri congressman whose 2012 Senate candidacy was derailed by his statement that women who are victims of what he called “legitimate rape” rarely became pregnant. Democrats used remarks like Mr. Akin’s to portray the G.O.P. as waging a “war on women,” a tactic that Republicans conceded was highly effective.

“Every candidate in the country is going to be asked about their position on abortion now,” said Tom McClusky, the president of March for Life Action, which advocates legislation to restrict abortion rights. “What we want to avoid are incidents like what’s happened in the past.”

Democrats have long believed that public support for legal abortion would prevent it from being effectively outlawed, as Texas has done. Even some conservative anti-abortion activists concede that their absolutist position is not one shared by a majority of Americans, though they believe some Democrats have overreached in vowing to eliminate all legal restrictions on abortion.

“You may not have the majority of people who agree with me that life begins at conception, but they don’t believe that abortion should be legal at any point, all paid for by the taxpayer,” said Penny Nance, the chief executive of Concerned Women for America, a conservative Christian organization.

Support for abortion rights has scarcely been the motivating factor for Democrats that it has been for conservative voters opposed to abortion. In the 2020 presidential election, voters who said abortion was the most important issue backed Mr. Trump over Mr. Biden, 89 percent to 9 percent, according to AP/Votecast data.

But while Republicans have campaigned on restricting abortion rights for generations, Democrats have moved left on the issue only recently — from Bill Clinton’s formulation that it should be “safe, legal and rare” to modern Democrats’ arguments that the choice should belong to the woman alone. Senator Bernie Sanders of Vermont campaigned with anti-abortion candidates as recently as 2017.

While virtually all elected Democrats now back abortion rights, very few with a national profile built a political identity around the issue.

One who tried was Wendy Davis, the former Texas state senator who spoke for more than 11 hours in a failed 2013 effort to block legislation to restrict abortion access in the state. She went on to run for governor in 2014 and for Congress in 2020 but was handily defeated both times.

“We cannot shy away from this issue for fear that we will be branded as abortion activists,” Ms. Davis said Thursday. “I am proud to be labeled in that way because there is no shame. There should be no stigma involved with abortion.”